Prospective jailbreakers on iOS & iPadOS 15 have been biting their nails and waiting for what’s expected to be a rootless jailbreak from the Odyssey Team. But even as development continues, security researchers are still dropping kernel exploits. 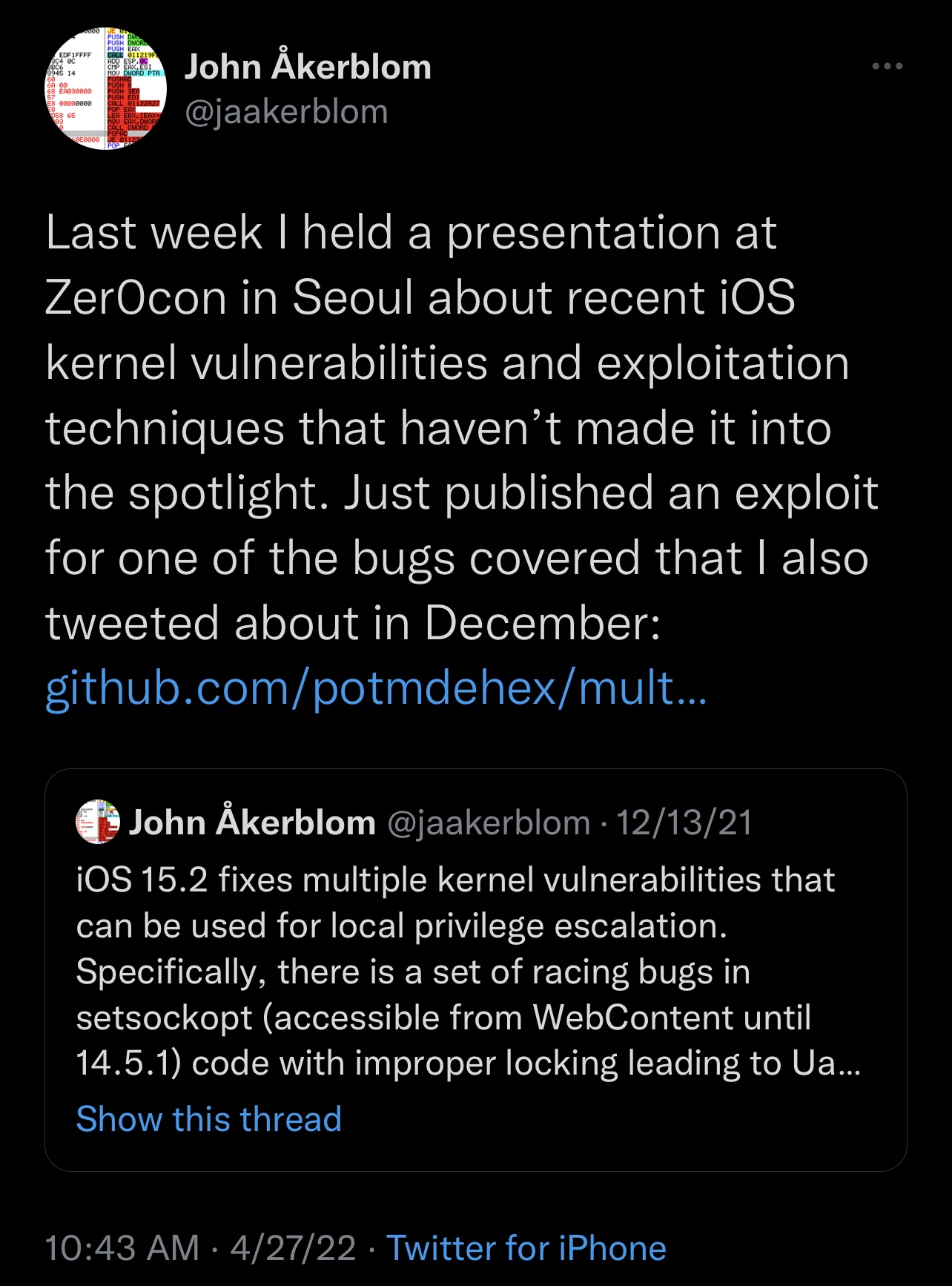 Today, security researcher John Åkerblom took to Twitter to share a GitHub link to what appears to be a kernel exploit for iOS & iPadOS 15.0-15.1.1 dubbed multicast_bytecopy. What’s more is the exploit achieves both read and write to the kernel memory.

From what we can gather based on the GitHub page, the current write up is intended only for iOS & iPadOS 15.0-15.1.1, but it can be adapted to work on previous version(s) of iOS & iPadOS including iOS 14.8.1 and earlier, some of which aren’t yet publicly jailbreakable. The exploit is based on the bug CVE-2021-30937, which was patched in iOS & iPadOS 15.2.

For comparison, the exploit currently being considered for use by the Odyssey Team is based on Brightiup’s CVE-2021-30955 kernel bug, so Åkerblom’s exploit is a new beast entirely, and with implications for backwards compatibility.

According to Åkerblom, the exploit is one that he presented at Zer0con in Seoul regarding recent iOS kernel vulnerabilities and exploration techniques that haven’t yet made it into the spotlight. Åkerblom originally Tweeted about this bug in December, and is  now releasing a kernel exploit based on it.

Not only is this kernel exploit potentially good news for those waiting for an iOS & iPadOS 15 jailbreak, but the backward compatibility also means that those who’ve held off on iOS & iPadOS 15 and stayed on a more recent iOS or iPadOS 14 release may have a light at the end of the tunnel.

Those interested in checking out the kernel exploit can head over to the official GitHub page. Currently, no jailbreak teams have announced any plans to integrate it into any jailbreak, but it will be interesting to see what the future holds.

Are you excited that there’s yet another exploit on the table for iOS & iPadOS 15? Let us know your thoughts on the comments section down below.