Streamers shouldn’t miss out on a new Disney+ sale, offering a whopping 80 percent off the regular price of $11.99 per month, or just $1.99 for your first month of Disney+. 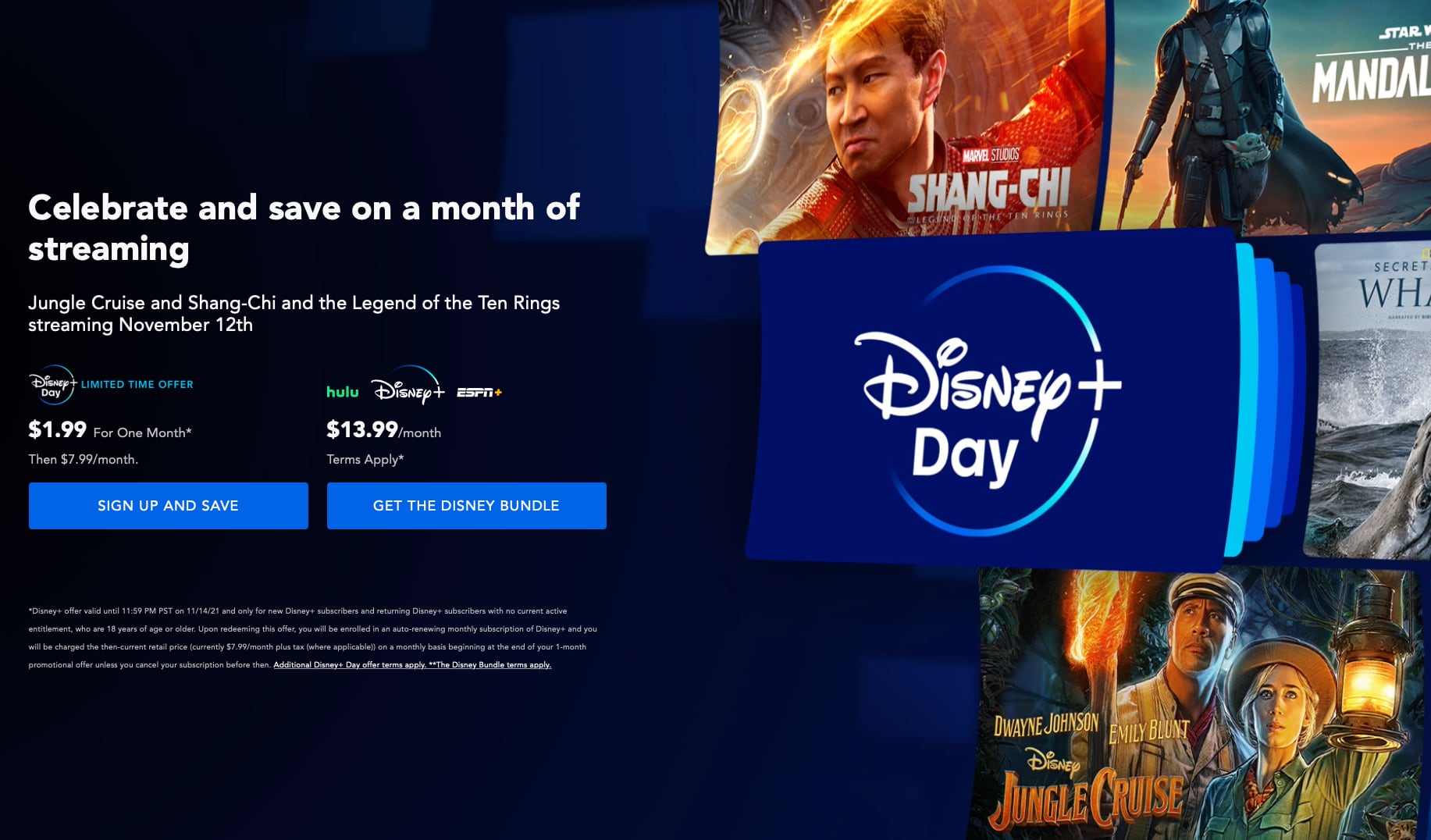 This new Disney+ sale starts Friday, November 12 and expires Monday, November 14 at 11:59 PM PST. It’s valid only for new and returning subscribers with no current active entitlement, who are 18 years of age or older and live in the United States and some other eligible countries. Read: How many subscriptions services do you pay for?

Here’s how to accept this offer and get a single month of Disney+ at 80 percent off:

In case you’ve been wondering, “Jungle Cruise” and “Shang-Chi and the Legend of the Ten Rings” are scheduled to start streaming on Disney+ from Friday, November 12, as Disney continues to experiment with the window of exclusivity for these and other titles.

Disney+ Day is coming, but what is it?

The Mickey Mouse house is holding its annual Disney Day event due this Friday. Billed as a “global celebration of fans,” this year’s Disney Day will be dedicated to new content releases across the Disney, Pixar, Marvel, Star Wars and National Geographic brands.

The entertainment conglomerate added an impressive 116 million subscribers in the June 2021 quarter, resulting in a total of 116 million paying customers as of August 31, 2021.

Engadget reports that the service will be providing the following Marvel Cinematic Universe movies in enhanced IMAX formatting from Friday, November 12:

These titles will offer the 1.90:1 IMAX aspect ratio while watching IMAX-specific scenes. The IMAX aspect ration, in turn, offers 26 percent more screen real estate but you’ll have to ignore the small black bars at the screen top and bottom.

For more than a decade, IMAX has helped filmmakers take fans across the Marvel Cinematic Universe in theatres and now that epic journey crosses into a new world: the home. IMAX, Disney and Marvel Studios are giving the fans what they want: the most immersive viewing experience throughout the life of a Marvel Studios film, from exclusive theatrical release to the library at-home where they can now watch the Avengers assemble with more picture than ever before.