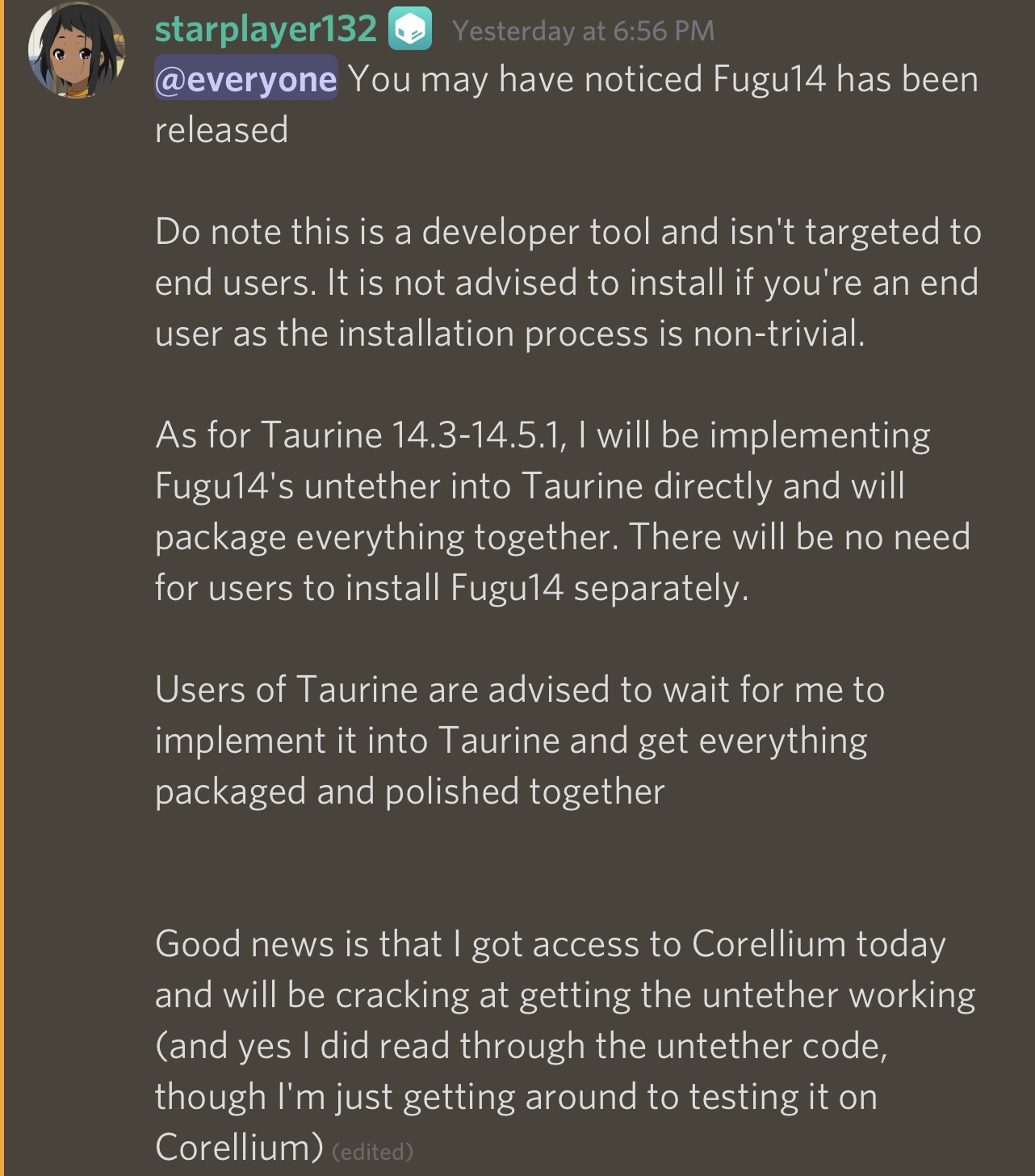 While unc0ver’s preliminary support for the Fugu14 untether is very much intended for developers only in its current form, CoolStar reaffirmed over the weekend via the Sileo / Taurine / Odyssey Discord channel that the Odyssey Team would take a different approach to updating Taurine to support the Fugu14 untether on supported device and firmware combinations.

More specifically, where the unc0ver v7.0.0 release requires end users to perform precursor steps to install and run the Fugu14 untether before deploying the unc0ver jailbreak app, the Odyssey Team intends to package the Fugu14 untether directly into the Taurine jailbreak in its initial support release to make the process more user-friendly as opposed to developer-centric from the start.

In separate comments made elsewhere in Discord, CoolStar alluded to the idea of first adding Fugu14 untether support to Taurine for devices that already work with the untether right out of the box, namely arm64e (iPhone XS and newer) devices running iOS or iPadOS 14.3-14.5.1.

Later on, the Odyssey Team would be taking a look at implementing support for the untether on older arm64 (iPhone X and older) devices in what could only be described as a divided release schedule.

It’s clear from the comments that the installation process would be different for arm64 devices And arm64e devices, but it isn’t yet clear if this means that there would be two separate jailbreak tools or merely different processes in the lone Taurine jailbreak app. Nothing is set in stone yet, however.

CoolStar added that because of generous donations from jailbreakers, the Odyssey Team was able to subscribe to Corellium’s powerful virtualization tools and can therefore test the untether on various devices that the team doesn’t have physical access to. This may help advance further development beyond those devices currently supported by the Fugu14 untether right out of the box.

While there isn’t yet an ETA for the Odyssey Team’s final release(s), we do advise those interested in trying the untether to refrain from using unc0ver v7.0.0 until the tool receives an update to fully package the untether into the jailbreak. We say this because the precursor steps are intended for experienced developers and can be both complex and dangerous if you don’t know what you’re doing.

As of right now, jailbreak developers should have everything they need to begin implementing the untether into their jailbreak tools, so it merely comes down to time. With that in mind, patience is strongly advised.

Are you as excited to see what materializes as a result of the new Fugu14 untether as we are? Let us know down in the comments section below.