Not long after security researcher Linus Henze released a much-anticipated untether for the jailbreak community to take advantage of on certain versions of iOS & iPadOS 14, hacker and unc0ver lead developer Pwn20wnd acted quickly to launch a new version of his jailbreak tool, and it wasn’t just a coincidence. 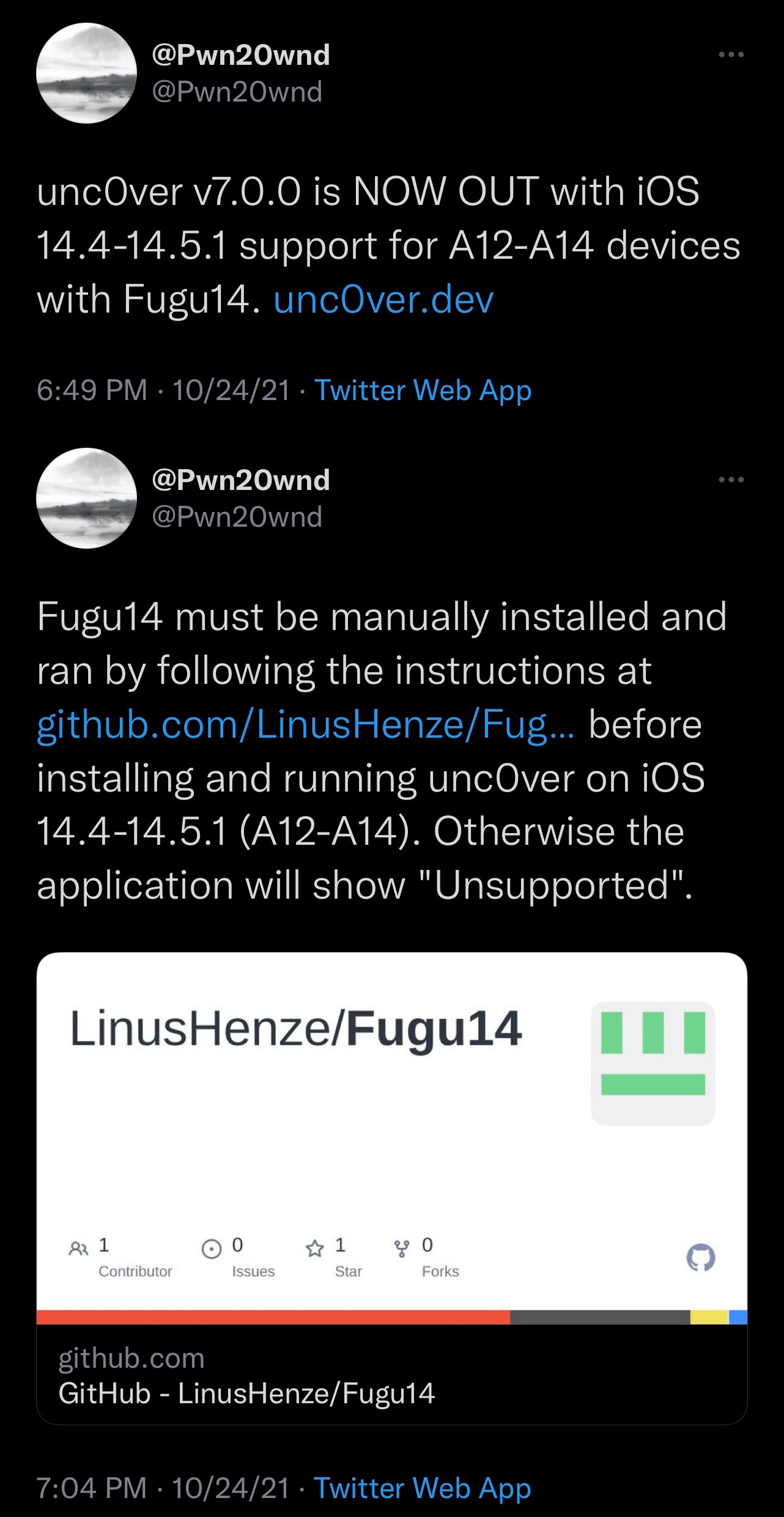 The new version of unc0ver, which has been dubbed version 7.0.0, incorporates at least preliminary support for Henze’s Fugu14 untether. This means that arm64e devices sporting A12-A14 chips, such as the iPhone XS and newer, can now use the latest version of unc0ver to jailbreak iOS & iPadOS versions 14.4-14.5.1 if they’ve been properly prepared to utilize Fugu14 beforehand.

In a follow-up Tweet, Pwn20wnd mentions that those looking to jailbreak the aforementioned device and firmware combinations must follow the instructions published on Henze’s GitHub page to manually install and run Fugu14 before installing and running the unc0ver jailbreak app to pwn any of the newly-supported firmware and device versions. Otherwise, the unc0ver jailbreak app will display the “unsupported” error message for the end user.

While many jailbreakers might be excited to untether their jailbreaks right now, we strongly advise waiting for further development.

For those wondering why we’d say that: unc0ver v7.0.0 doesn’t package the Fugu14 untether in its current form, so additional work will be required by the end user to install it that may be best suited for experienced developers. Doing things incorrectly can reportedly result in device boot loops, which are never fun to deal with. So it’s best to wait until a future update in which the untether gets fully packaged into the jailbreak so that the install process becomes safer and more user-friendly.

Pwn20wnd appeared to receive both praise and disdain from the jailbreak community following the unc0ver v7.0.0 release. While many expressed excitement after witnessing preliminary untether support, others voiced aparent concerns about the seemingly convoluted install process and the potential impact it could have on the devices of those who don’t know what they’re doing when they try to install the untether.

Henze jumped on Twitter soon after with commentary appearing to quell some of the backlash, noting that he did test some of the unc0ver builds himself before Pwn20wnd released them, that the untether would be safe to use as long as the end user didn’t modify any of the code behind it, and that it was likely that a user-friendly installer would be released in the future: 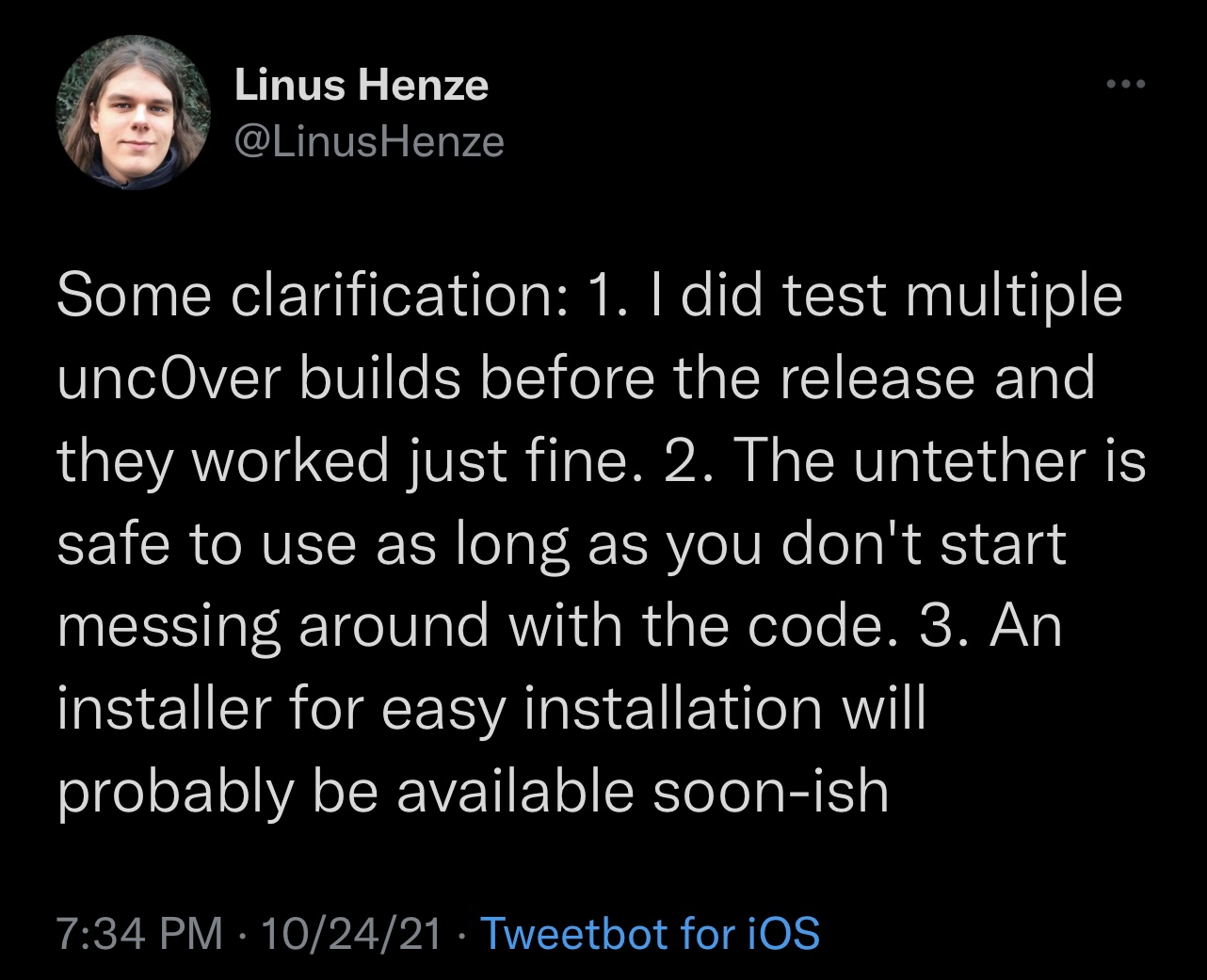 All of these points shared by Henze seem to address some of the core concerns many have voices, and his responses all appear to reflect good news, but they also hint that those wanting to take advantage of the untether should continue to be patient.

As of now, there is no ETA for when unc0ver might add support for a user-friendly Fugu14 untether installer, but it’s worth noting that the Odyssey Team is also working to add support to the iOS & iPadOS 14-focused Taurine jailbreak. There’s no word yet on what the checkra1n team plans to do, but we suspect we’ll hear more in the future.

Will you be attempting to use unc0ver to install Henze’s untether in its current state, or will you be waiting for things to stabilize beforehand? We’re excited to read your thoughts in the comments section down below.