Back in February of last year, Apple officially announced it had secured the streaming rights to a futuristic drama starring Mahershala Ali (Moonlight) and directed by Benjamin Cleary (Stutterer). It was described as a “genre-bending drama” at the time, but, unfortunately, there wasn’t much else to go on. Certainly not a release date. But that’s changing today.

Thanks to a report today from Deadline, we not only get a first-look photo of the upcoming film, but we also find out when the film will premiere. Which will be December 17, 2021. On that date, the film will apparently see a limited theatrical run, while also debuting on Apple TV+.

Ali stars in the film as a father and husband who “is presented with the risky chance of surviving a terminal illness.” And that’s all we’ve got to go on regarding the story, for now. 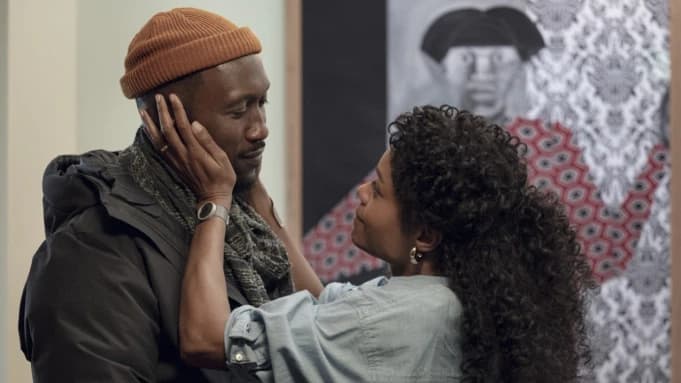 The original report has a few other photos you can look at, too. Apple Original Films isn’t quite ready to show off everything just yet, though. So we’re probably still a ways off before we get even a teaser trailer.

Swan Song is also set to star Glenn Close (Damages) and Awkwafina (Shang-Chi and the Legend of the Ten Rings), along with Adam Beach (Windtalkers). The film will be co-produced by Ali, and Cleary also wrote the film.

Cleary spoke to Deadline on the upcoming film:

This started as a premise I had ten years ago I’d stuck in a drawer, and then five years with the script, and when Mahershala’s name came up, I was like, ‘can we even get him to just read it? He did, and we sat down and it became one of those conversations you sometimes have, where each minute you feel more energized and inspired. I could see within minutes I was sitting across from someone special, who was completely tuned into the heart of the script. After two hours, he said, ‘I’d love to do this.’ We were delayed six months by Covid, and we used tht time to speak about all the elements, and he had such a beautiful way of discovering all these little things within the story.

Not everyone is at a place in their career where they’re empowered. You get a job, you do your best, and you go away and you see how it comes out. There have been a few projects where I have been present enough to have an impact on how the story lays out, and that’s true for so many actors in my position. But often you don’t get acknowledgment for that. It was great to have an opportunity for those ideas and that feedback to not only have impact, but to be credited as well. Often, as a Black actor, there is a bit of work in transforming characters that aren’t necessarily written with you in mind. It’s not as easy as, plug in David Oyelowo and off you go. There has to be a lot in how culture of race impacts everything from sound design to wardrobe, to music in a film, to language and how characters choose to deal with moments.

The full report is certainly worth a read, especially if this project caught your attention. And as soon as we have more to share on Swan Song, we will.