The most current jailbreak tools available to the public today are Taurine and unc0ver, each of which are capable of jailbreaking devices running up to and including iOS or iPadOS 14.3. Several iPhone and iPad software updates later, and we’re currently residing at iOS & iPadOS 14.7.1 with a public iOS & iPadOS 15 release looming just over the horizon.

Having said that, the elephant in the room would be the blazingly-obvious question: where are all the jailbreak-viable exploits for iOS 14.4 and later?

Fortunately for those who’ve been waiting for such a feat, IT security student Stefan Sterz (@0x7374) Tweeted a particularly intriguing teaser video this Friday that appears to showcase a remotely activated vulnerability proof of concept (PoC) that affects devices running iOS & iPadOS 14.4-14.5.1: 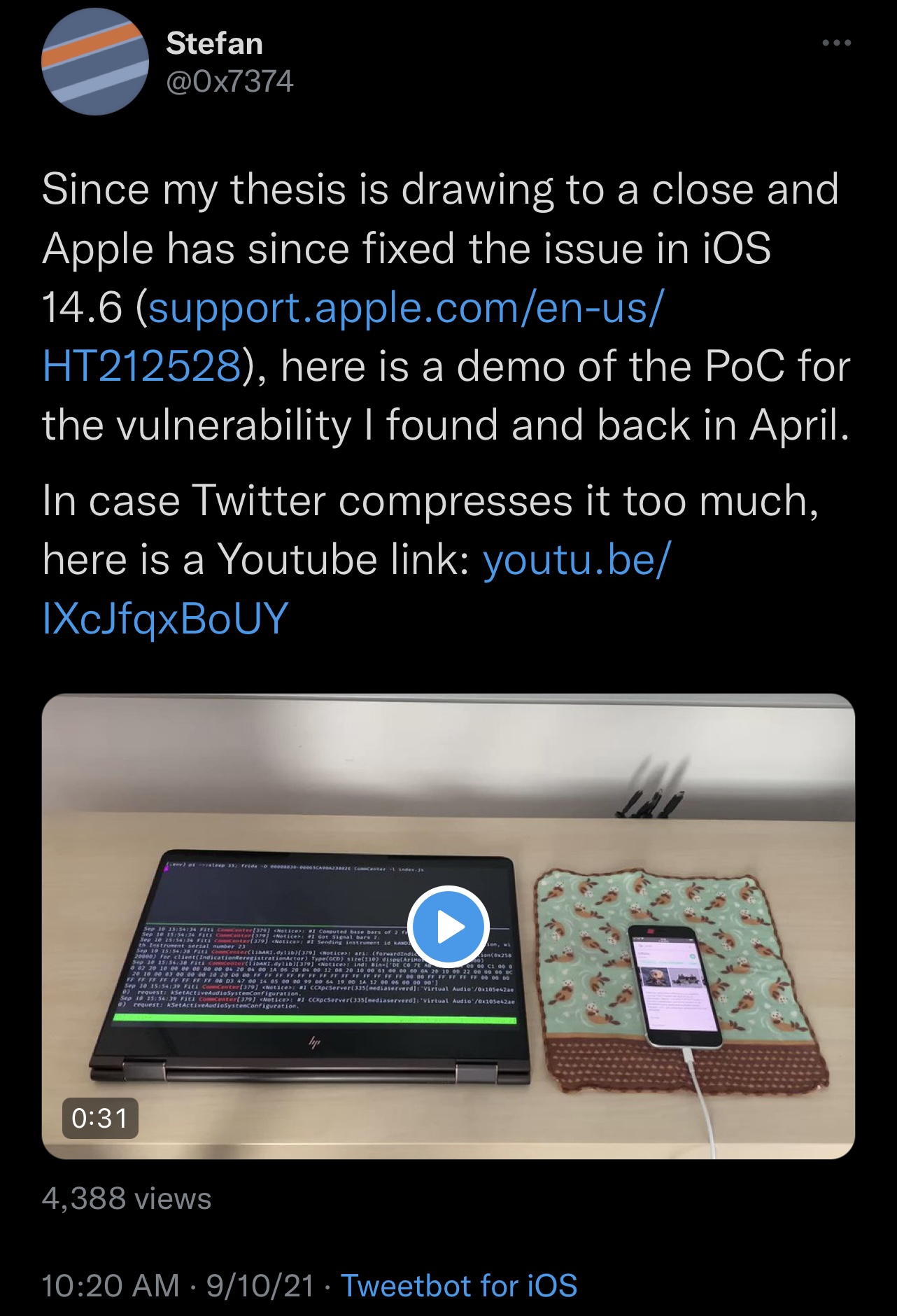 As noted in the Tweet, the vulnerability was discovered back in April, and Apple appears to have patched it in iOS & iPadOS 14.6. The video demonstration was uploaded to YouTube, and we’ve embedded that video for your viewing pleasure below:

The notes in Apple’s iOS & iPadOS 14.6 security contents describe the vulnerability like so:

Description: A logic issue was addressed with improved restrictions.

*We would like to acknowledge CHRISTIAN MINA and Stefan Sterz (@0x7374) of Secure Mobile Networking Lab at TU Darmstadt and Industrial Software at TU Wien for their assistance.

In case you didn’t notice, or tend to question the validity of the video, the iPhone isn’t physically connected to the HP tablet involved in the hacking. Unlike most vulnerabilities, this one can be triggered remotely and wirelessly. Pretty neat if we do say so ourselves!

It remains to be seen whether this vulnerability will be released or if it could be used to update existing jailbreaks such as Taurine or unc0ver to support iOS & iPadOS 14.4-14.5.1 or not. While we certainly hope that something materializes out of it, this remains unconfirmed by those jailbreak teams. Some of those chiming in about this vulnerability on /r/jailbreak have suggested that it could be limited to certain handset configurations, such as those sold by AT&T and T-Mobile.

As a friendly reminder, developments such as this are one of the chief reasons why we always recommend that avid jailbreakers-to-be always stay on the lowest possible firmware. As for why, it’s simple really. Those who’ve updated to iOS or iPadOS 14.6 or later won’t be able to take advantage of this vulnerability if released and worked into a jailbreak tool.

We will continue to monitor this vulnerability and any work that may stem from it. In the meantime, are you excited for what this could become, or will you be upgrading to iOS or iPadOS 15 when it launches? Let us know in the comments section down below.