A trade-in program is a potentially cumbersome effort, especially if you’re a company the size of Apple. Which is why outsourcing that effort to a third-party company is not uncommon. But one such partner being used by Apple for its own trade-in program has a less-than-stellar online reputation.

And a new report today from The Verge details why any Apple user (in the United States) thinking about trading in their device might want to think twice about that. At least when it comes to using Apple’s services for a mail-in trade, anyway. Phobio, which is based out of Atlanta, Georgia, appears to be handling the majority –if not all off– Apple’s trade-in efforts for mail-in trades in the United States.

But Phobio is seeing an influx of customer complaints, especially recently. The reason? Devalued trade-in offers. According to a lot of people out there in the wild who have used Phobio to trade in their Apple product, ranging from iPhones to Macs to Apple Watches, their initial trade-in value has been cut by sometimes hundreds of dollars for perceived defects that, by all accounts, weren’t present when the product was sent in. 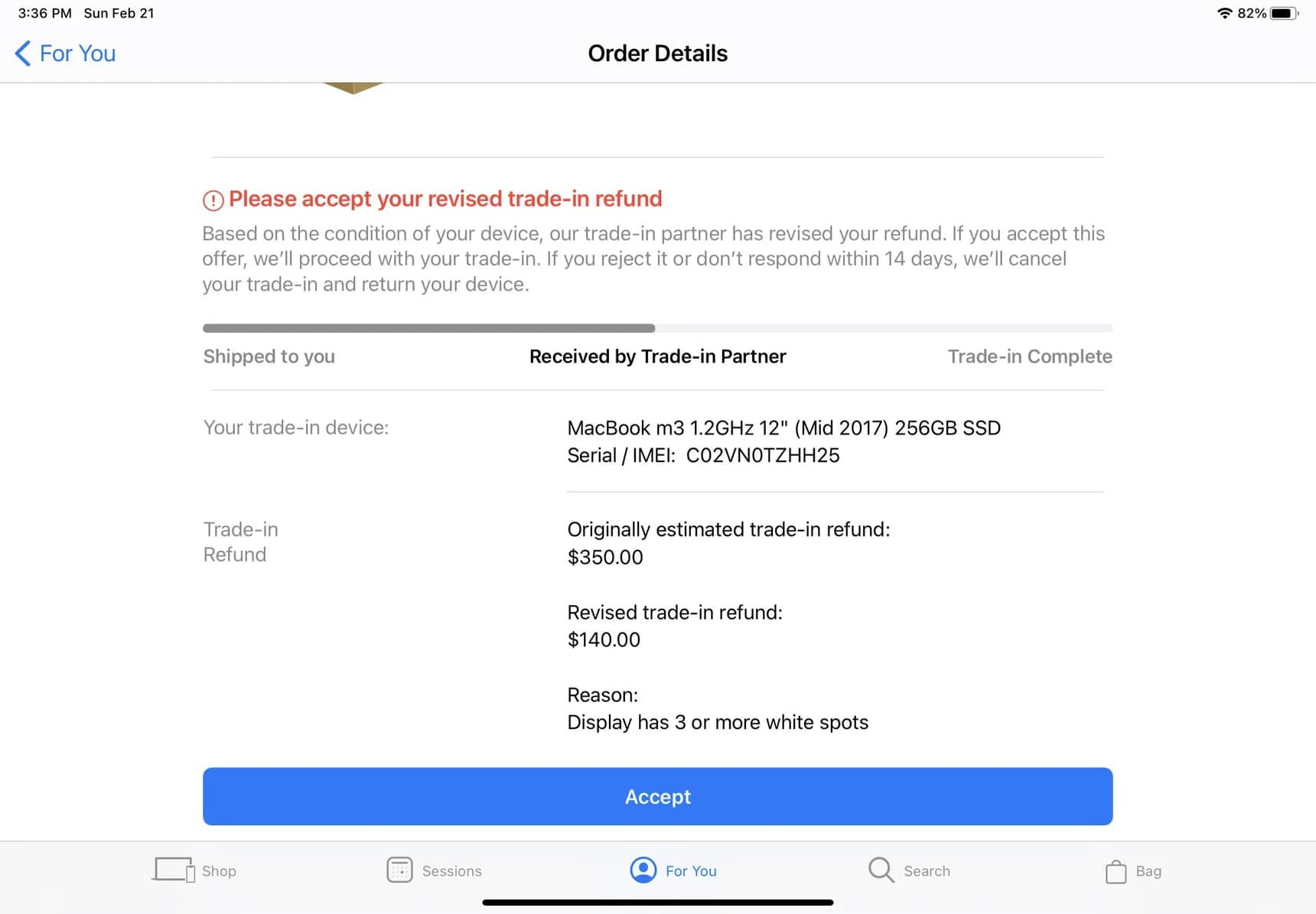 For instance, the report highlights that many customers trading in a MacBook have run into a decreased trade-in value due to “three or more white spots” on the screen. However, in the vast majority of these cases where the trade-in offer has been decreased because of this reason, the device owner says that’s not the case at all.

One such customer is Daniel McGloin, who The Verge interviewed for the story. According to him, his MacBook (a 2017 model) was first quoted as getting $350 back in trade-in value. He received that quote directly from Apple, using the official Apple Store app. However, when McGloin’s MacBook made it to Phobio, that offer was revised down to just $140, due to “3 or more white spots”, which McGloin said were definitely not there when he sent the product in.

(White spots on an LCD display are typically easy to identify, and are directly related to burn-in or serious damage. They are not easy to miss, in most cases.)

This is when McGloin discovered that he wasn’t dealing with Apple at all, as far as the trade-in was concerned. Instead, he was working with the aforementioned company, Phobio. An online search discovered that Phobio’s online reputation is not so great, and that a lot of customers have experienced the same exact situation as McGloin.

It’s here I realized that number one, the trade-in program is not run by Apple, number two, there are lots of people observing the same behavior, and number three, this seems to be a new development in the last few months,’ McGloin says.

The Verge says they inspected McGloin’s MacBook and discovered no white spots. And, indeed, further research with other Phobio customers trying to trade in their products revealed the same: no apparent defects, despite the fact Phobio offered a far less value due to these supposed issues.

Some customers who have used the online mail-in trade-in option feel like they’re being duped, with an apparent (and potentially obvious) bait-and-switch move being used by Phobio. Offer a great trade-in value, “inspect” the device and find some defects, then revise the quoted value to be much less. In many cases, a customer who has already moved forward with the purchase of a new laptop or other device might feel compelled to take the lesser value because they have to. Or maybe something happened in transit and there really is damage. Or maybe the company’s in-house testing procedures discovered something unseen by the user.

For what it’s worth, online trade-in offers free shipping across the board. And customers can reject the trade-in offer, whether it’s been revised or not.

The potential issue here isn’t so much that Apple uses a third-party company to handle online trade-ins. That’s a pretty common enterprise for companies like this. It’s the fact that other than some relatively vague language on its site, Apple doesn’t explicitly make it clear which company it’s working with. And, at a glance, some customers may think they’re working with Apple directly, especially since trade-in correspondence has Apple’s logos, and usually takes place within Apple’s own first-party Apple Store app.

Yet for Apple, which stakes its reputation on quality control, the negative experiences customers report having with Phobio threaten to undermine the image Apple has cultivated as a customer-obsessed product company, which, in turn, helps justify the company’s high-priced consumer tech.

Apple tells us Phobio is not the only company that helps manage its US trade-in program, but it wouldn’t name any others — and we verified that every type of product you’d trade in at Apple.com (computers, phones, tablets, and watches) is currently handled by Phobio in the United States. Apple also has a trade-in partner named Brightstar servicing Canada and other parts of the globe, but two Brightstar employees told us it no longer accepts US trade-ins. One referred us to Phobio specifically.

Apple started accepting in-store iPhone trade-ins back in 2013. However, Apple only started doing the same for its MacBook lineup in June of 2020. Doing the trade in an Apple Store means you’re dealing with Apple directly, which is apparently the best course of action. However, with the ongoing coronavirus pandemic many customers may feel more comfortable using the online mail-in tool instead. Which means dealing with Phobio instead.

Here are a few examples:

“Your trade-in value has changed.”
I don’t remember white spots but that’s not the damage I made. What a scam. #apple #tradein pic.twitter.com/hlgebhxCgq

2/ So on with them now, it turns out they use "trusted partners" to do fulfillment on the trade-ins. So the outsourced company can I guess either break it or report damage to stiff you on the price.

Pretty disappointed in Apple’s trade in vendor. Trade in value dropped from $490 to $180 after “three white spots” magically appeared on my old MBP while in transit. Certainly feels like bait and switch on that one.

After all of that, Phobio did provide a comment for the initial story:

We carefully assess each device sent to us, and only change the initial quote if the device we receive or its condition differs from what was initially indicated by the customer. We document our findings at every step of the way with photos that are shared with the customers. The customer can then agree to the revised quote, or if they do not, we express ship it back to them at our expense.

We specifically train our support team to see the trade from the point of view of the customer, with empathy, and to advocate for the customer. If devices are damaged in transit or we make a mistake in the inspection, we seek to fix it immediately. We strongly believe in giving full and fair value to customers for their trade ins. This helps fuel the circular economy, and sustainability, and it is part of our corporate purpose.

The full report is absolutely worth a read, and should serve as a reminder to document your device as best you can before you undergo any trade-in efforts.

If you’ve used Apple’s online mail-in trade option, how was your experience? Let us know in the comments.