The Sileo package manager has long carried the stigma of being exclusive to specific jailbreaks – namely those created by CoolStar-led development teams such as Chimera for iOS 12, Odyssey for iOS & iPadOS 13, and Taurine for iOS & iPadOS 14.

Third-party ports to permit Cydia and Sileo on the same device have always existed, such as the now legacy Diatrus installer and the more recent Bingner installer. The Oydssey Team even went as far as to create an Odysseyra1n script that could turn a checkra1n’d handset into a quasi-Odyssey device with the procursus bootstrap and the Sileo package manager; the latter was especially popular given the length of time it took for an inclusive iOS & iPadOS 14 jailbreak to surface.

As of today, however, it seems that sketchy third-party ports and jailbreak-changing scripts will no longer be necessary. In an announcement shared this evening via Twitter by @aarnavtale and echoed in a Retweet by the official @GetSileo account, we learn that Sileo is now officially available even on jailbreaks using the Bingner/Elucubratus bootstrap – A.K.A. checkra1n and unc0ver: 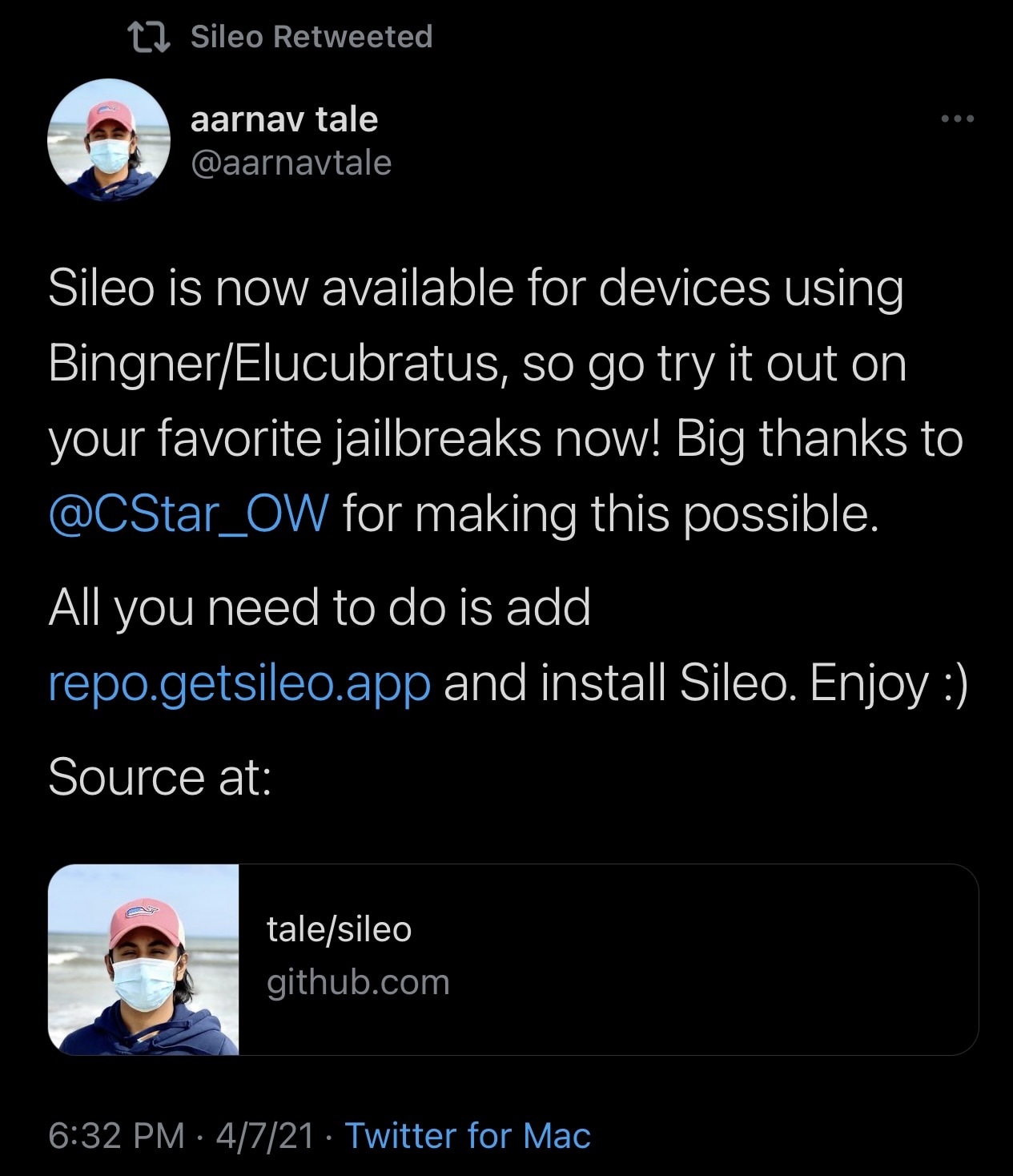 We should also add that this official Sileo installer is open source on the developer’s GitHub page.

The announcement is particularly huge because it means that more jailbreakers can finally begin using a modern package manager with a drop-dead gorgeous aesthetic that includes native Dark Mode support, and that is built primarily using Apple’s performant Swift programming language. It’s worth noting that it comes about a month after the Sileo Team officially open sourced its package manager on GitHub.

Installing Sileo on a checkra1n or unc0ver device is as simple as adding a repository to Cydia and installing the necessary packages. Unlike previous ports and Odysseyra1n installations, this installer won’t change anything about your existing Binger/Elucubratus bootstrap, and it’s also officially endorsed by the Sileo Team.

As such, this method officially supersedes the previous Sileo installer technique we shared, as that method of installing Sileo is now deprecated following this release.

If you’re interested in going hands-on with Sileo on your checkra1n or unc0ver device without uninstalling Cydia and all the other Bingner/Elucubratus dependencies you’ve come to know and love on your jailbreak, then this is for you. To get started, you can follow our step-by-step tutorial.

Are you planning to install Sileo alongside Cydia on your checkra1n’d or unc0ver’d device? Let us know in the comments section down below.