Just last week, SakuRα Development launched an all-new semi-untethered jailbreak tool dubbed kok3shi for 64-bit iOS 9.3-9.3.6 devices. It was a bit of a surprise given that most of today’s jailbreak-centric news revolves around iOS & iPadOS 13 or 14.

But as is the case with any initial jailbreak release, it would t be long before kok3shi received its first update. As such, SakuRα Development released a second public beta version of the kok3shi jailbreak, officially bringing it up to version 1.0 beta 2.

SakuRα Development announced the updated kok3shi jailbreak tool bright and early Tuesday morning via Twitter, being sure to mention the details regarding what was new in this particular release: 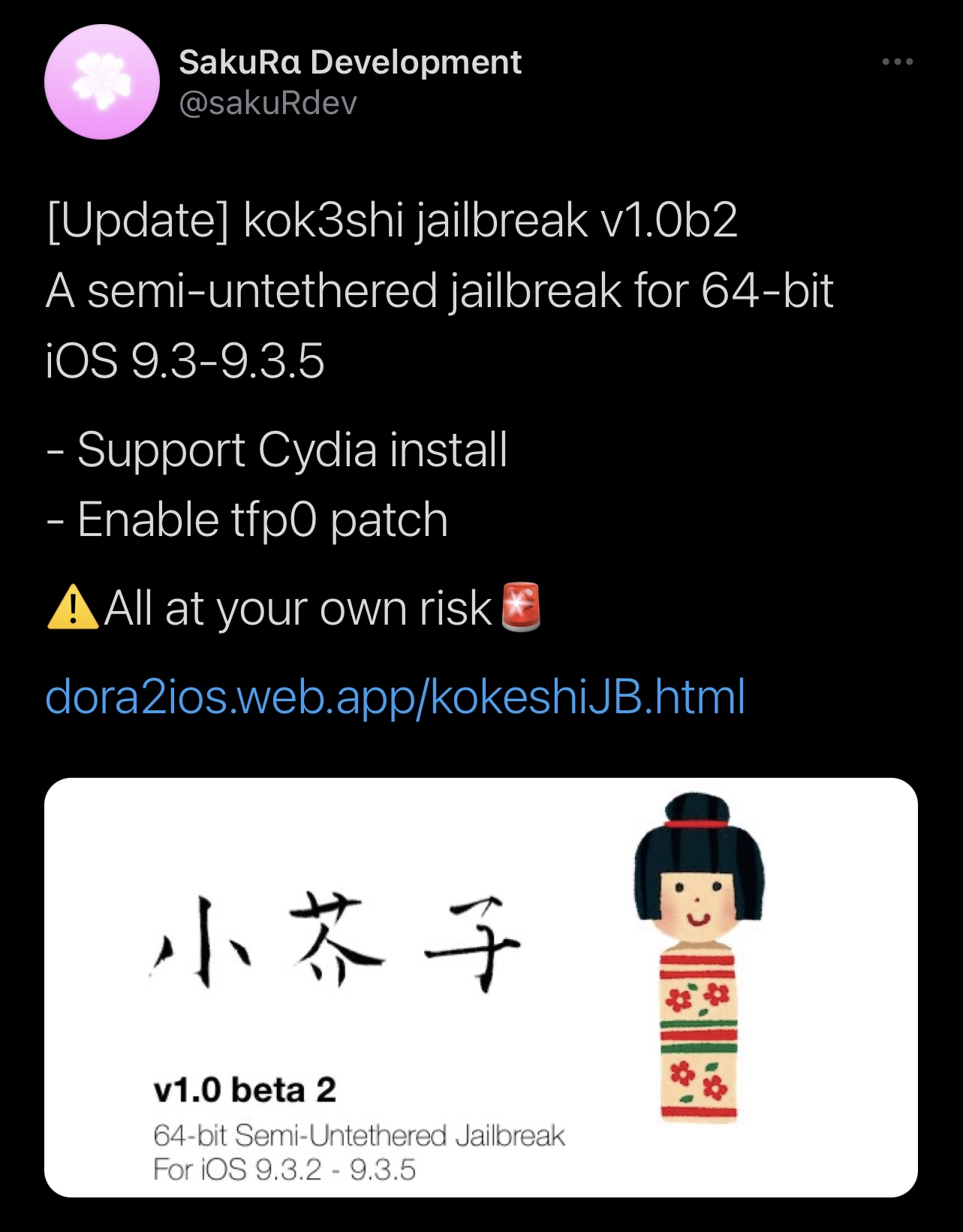 As you might remember from our initial post about the kok3shi jailbreak, version 1.0 beta 1 didn’t include Cydia and was an SSH-only experience. Version 1.0 beta 2 changes this by adding a Cydia installer and enabling a tfp0 patch, among other things.

Another thing we’d like to point out is that kok3shi is now advertised as supporting iOS versions 9.3-9.3.6. Originally, Sakura Development only designated compatibility with iOS versions 9.3.2-9.3.6.

Since kok3shi is only for 64-bit devices, it only supports devices such as the iPhone 5s, iPhone 6, iPhone 6 Plus, iPad Air 1, iPad Air 2, iPad mini 2, iPad mini 3, iPad mini 4, and iPod touch 6G. Those using 32-bit devices with iOS 9.3.5-9.3.6 are advised to use the Phoenix jailbreak tool instead, which conveniently received a rare update just yesterday.

Just like with the initial release, the best way to install kok3shi is with Xcode on a Mac, followed by a signing service. The latter can be less reliable, as signing services unfortunately get their certificates revoked rather frequently. Unfortunately, AltStore only supports iOS 12.2 and later, so it can’t be used with kok3shi.

Are you one of the few jailbreakers still using an iOS 9 device either as a daily driver or as a side hobby handset? Let us know in the comments section down below.