While much of the jailbreak-centric hubbub recently has been related to the unc0ver jailbreak picking up support for iOS & iPadOS 14.0-14.3, that’s not to say developments aren’t happening elsewhere.

One example would be the iOS & iPadOS 13-centric Odyssey jailbreak tool, which received an update to version 1.3.0 this Tuesday evening.

The Odyssey Team announced the latest Odyssey jailbreak update via Twitter only a few minutes ago: 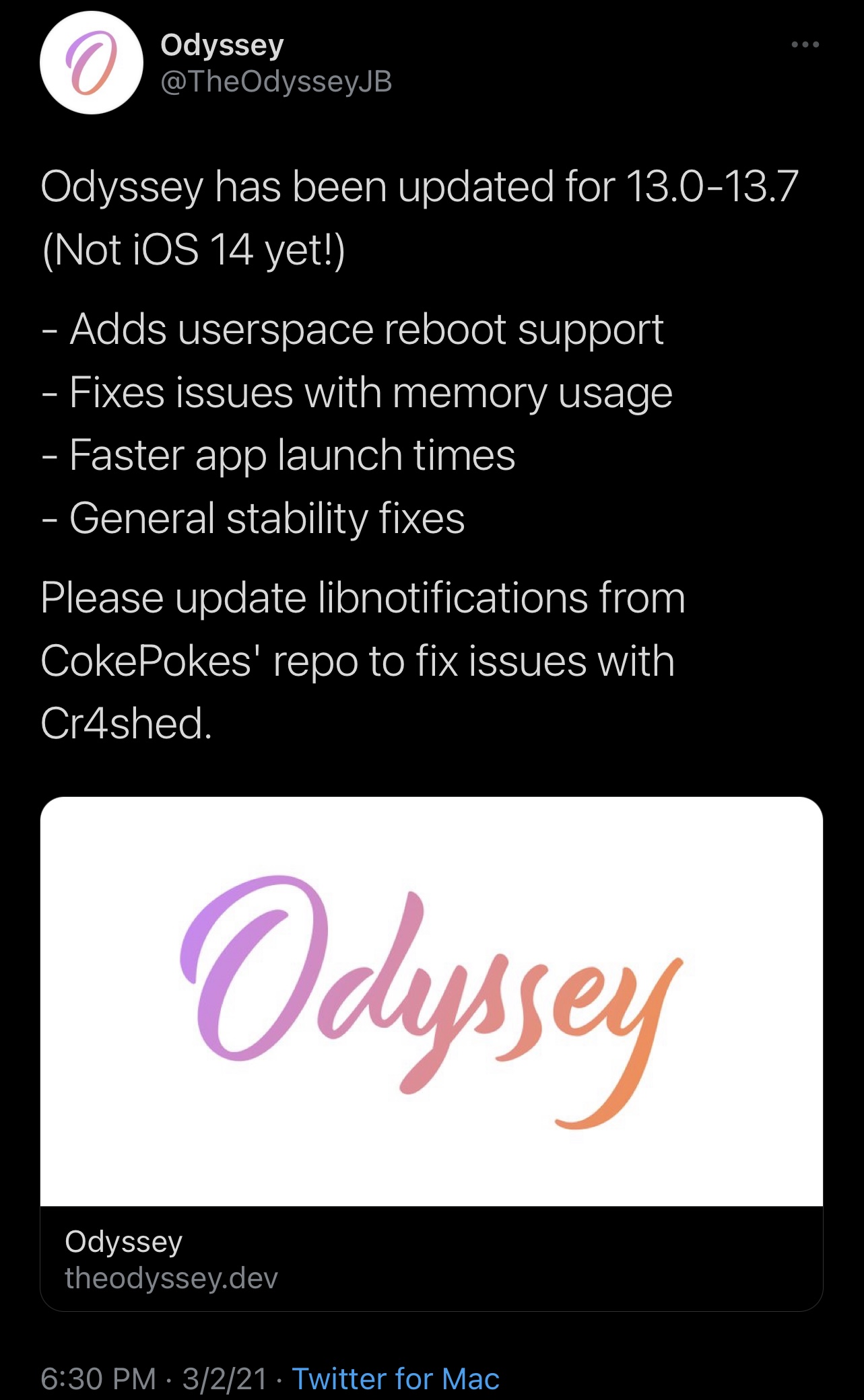 As noted in the official change log for Odyssey version 1.3.0, the latest version incorporates all of the following changes:

It goes without saying that the userspace reboot support is the most substantial change in today’s Odyssey jailbreak update. For those wondering, a userspace reboot could be described as a stock reboot into the jailbroken state, which can sometimes fix issues with system apps and/or services not working as expected after jailbreaking.

Apart from the newfangled userspace reboot support, users should find the latest version of Odyssey to be more performant and stable thanks to various improvements pertaining to memory usage and the bevy of bug fixes that have been baked in.

Existing users of the Odyssey jailbreak for iOS & iPadOS 13 are, of course, recommended to download and deploy the latest version of the tool at their earliest convenience. Simply downloading the latest version and re-running the jailbreak over your existing installation will install all the latest patches.

If you’ve never jailbroken with Odyssey before, version 1.3.0 is available from theodyssey.dev, and installing it on your iOS or iPadOS 13.0-13.7 device is as easy as following the steps outlined in our step-by-step tutorial. The easiest way to install Odyssey is with AltStore.

Please note that CoolStar’s iOS and iPadOS 14, jailbreak which has been referred to as Odyssey14 for the time being and is very likely to be renamed upon release, is still under development at this time. This is not that tool.

Have you tried the latest version of the Odyssey jailbreak yet? Be sure to let us know how it went for you in the comments section below.