Many jailbreakers were taken by surprise this past week when apps installed by AltStore post-January 28th suddenly began crashing upon launch. AltStore’s development team quickly recognized the issue responsible the crashes, citing server-side issues on Apple’s end, and then released an update in the form of version 1.4.3 this afternoon to resolve it.

While AltStore certainly is popular among jailbreakers for its ease of side-loading jailbreak apps like Chimera, Odyssey, and unc0ver and keeping them signed via AltDaemon, another popular option for achieving the same means was ReProvision, which was also unfortunately impacted by Apple’s server-side changes. Worthy of note, however, it seems that ReProvision won’t be receiving any updates to fix the app crashes as AltStore did.

Developer Matt Clarke, the brilliant mind behind the popular ReProvision application, announced the unfortunate news over Twitter just this afternoon: 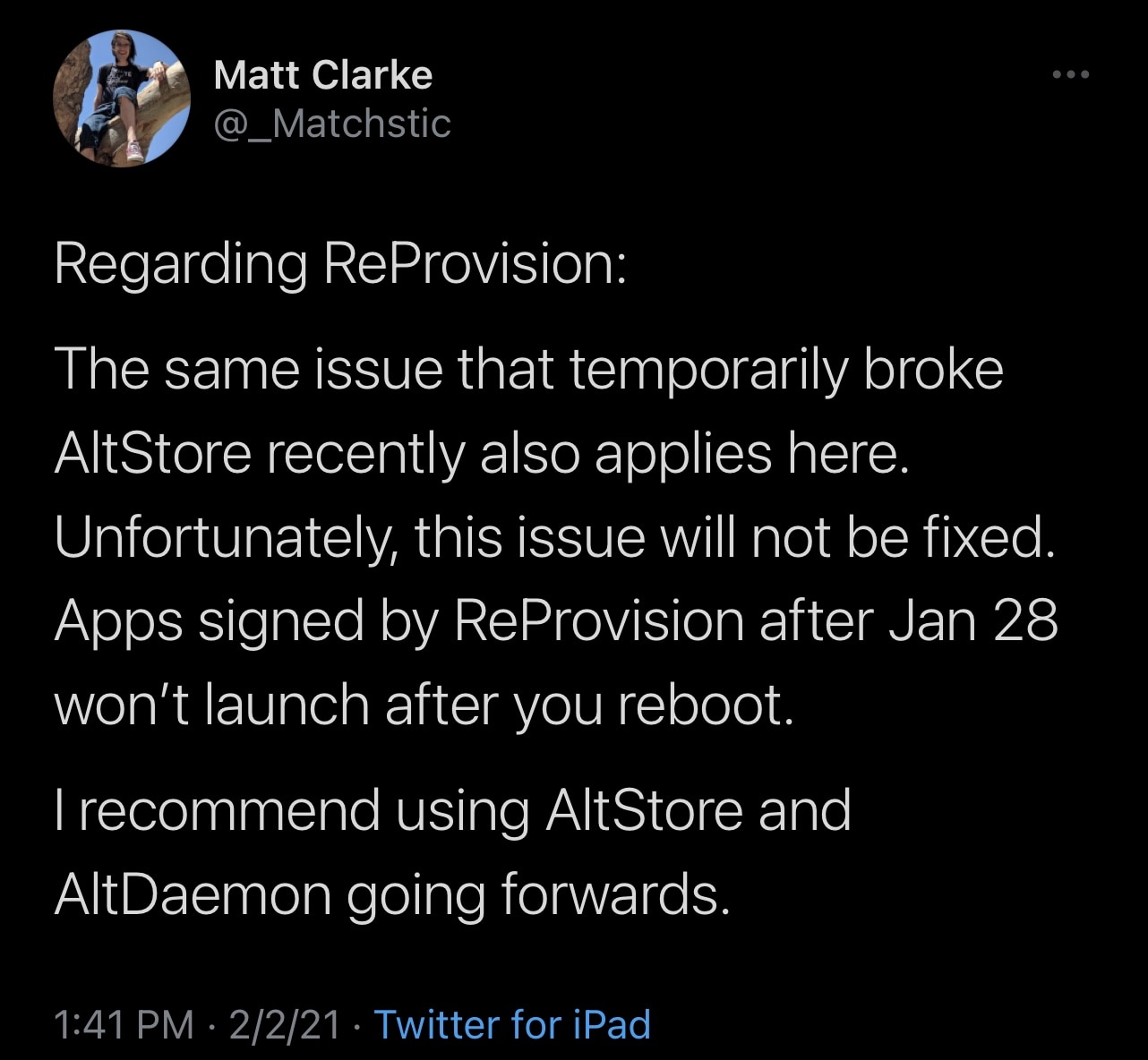 From what we can father, apps installed via ReProvision post-January 28th will fail to launch properly following a reboot. Sound familiar? It should. This is exactly the problem that today’s AltStore and AltServer v1.4.3 update was released to fix.

Clarke goes on to explain that there are currently no plans to update ReProvision to fix this issue, and instead points users to AltStore and AltDaemon for their side-loading and app-signing needs.

The news doesn’t come as much of a surprise, as ReProvision was already considered to be end of life (EOL) software before today’s break. The app stopped working as intended some time ago, but miraculously began working again last February. The developer had no plans to fix the software before then, and so it shouldn’t shock anyone that there are no plans to fix it now.

Both the AltStore & AltDaemon combo and ReProvision can accomplish the same task, so no jailbreaker is really losing out on anything. AltStore supports both macOS and Windows, so it’s easily in reach for just about anyone with a computer. Furthermore, it’s about just as easy to use as ReProvision was.

Those who aren’t already using AltStore can download it from the tool’s official website. We also have step-by-step tutorials that detail the process of using AltStore to side load the Odyssey and unc0ver jailbreak tools:

Are you sad to see that ReProvision has officially met the end of its road? Let us know in the comments section down below.