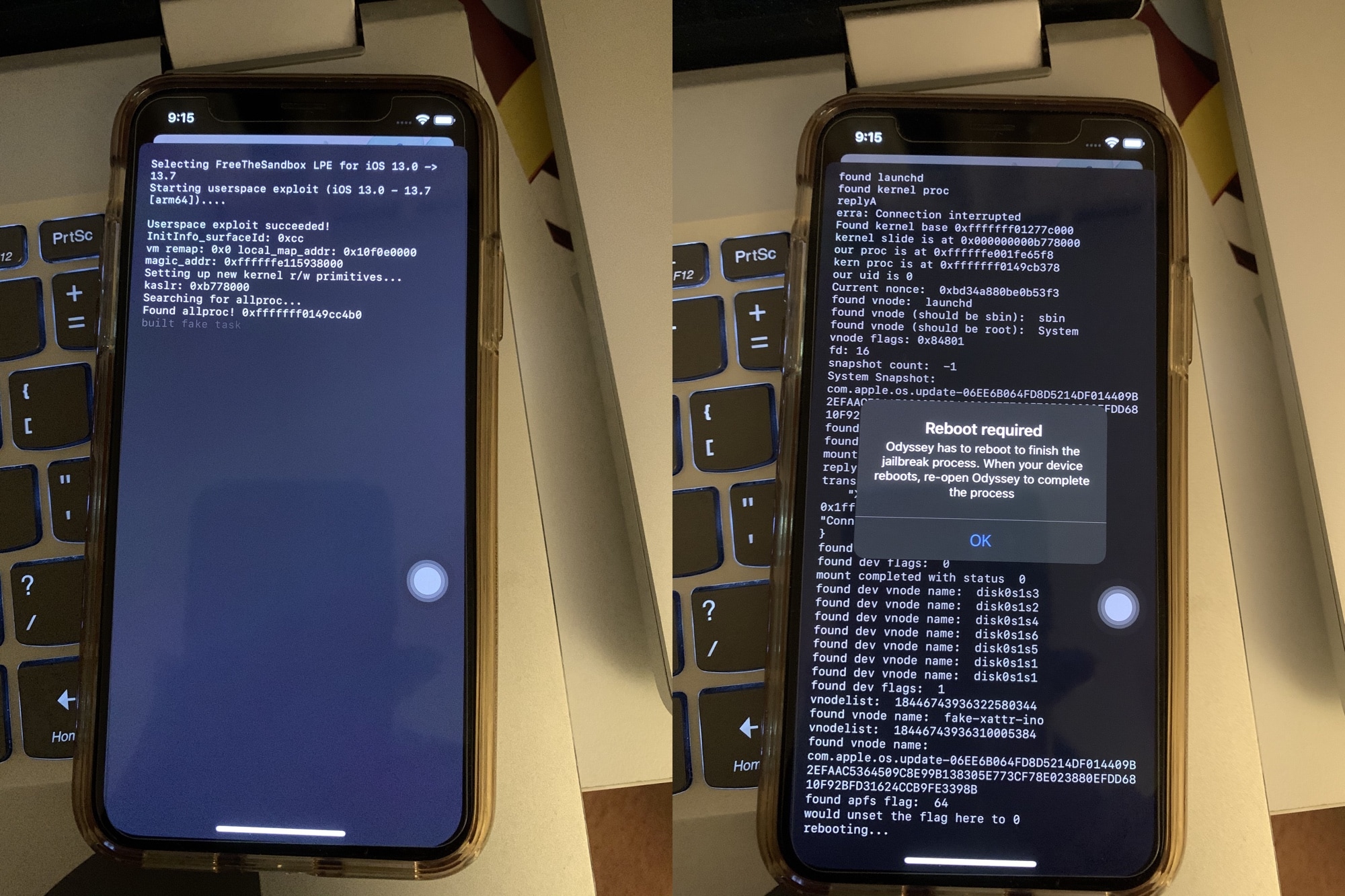 The Odyssey Team updated its iOS 13-centric Odyssey jailbreak tool at the crack of dawn Friday morning to version 1.2, adding support for the new iOS 13.5.1-13.7 exploit that was released by FreeTheSandbox in collaboration with ZecOps just yesterday.

An announcement about the release was Tweeted by the Odyssey Team’s official Twitter account this morning with a link for avid jailbreakers to download the tool for themselves: 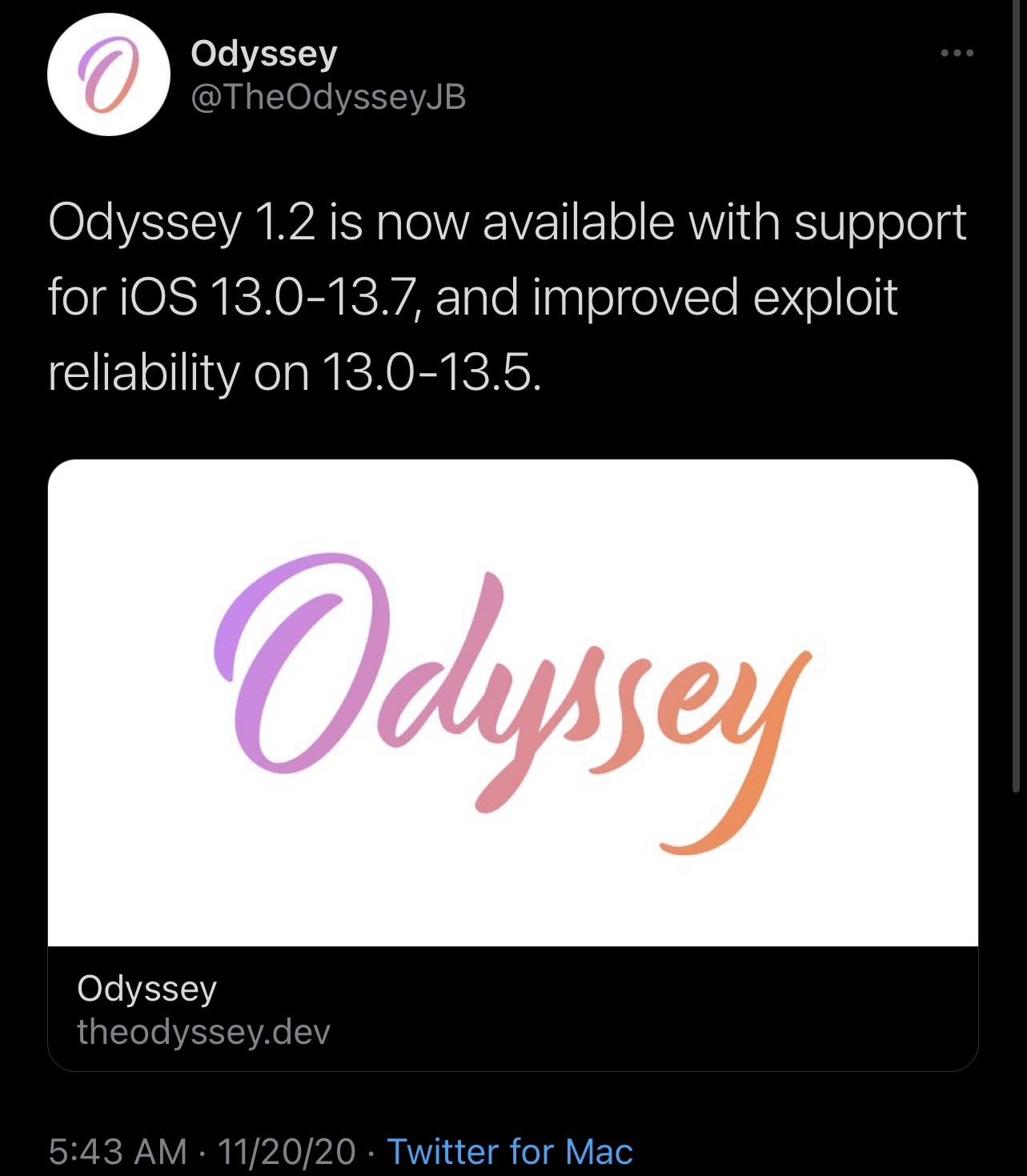 Additional context was provided in the Sileo / Odyssey / Chimera Discord channel, in which Odyssey Team lead developer CoolStar shared the full change log for this release and mentioned some other important tidbits that might be worth noting before trying the jailbreak for yourself:

– Supports iOS 13.0 – 13.7 on all iOS devices
– Significantly better success rate on iOS 13.3.1 and higher
– Significantly faster exploit for all iOS 13.0 – 13.7
– Uses FreeTheSandbox’s exploit by default on all 13.0 – 13.7
– Removes time_waste exploit
– tardy0n is still available as an option if needed (though it’s hidden as FreeTheSandbox’s exploit is way better)
– Fixes issues with tweaks not injecting sometimes into certain processes
– Improves stability post-jailbreak

In a follow-up message, CoolStar said that Odyssey v1.2 may have trouble jailbreaking devices equipped with A8-A9 chips, but that those equipped with A10 and newer chips should be fine:

FYI it has come to my attention Odyssey 1.2 may not work on A8 or A9 devices. A10 and higher should be good to go though. A9 issues will be looked at shortly (expect 1.2.1 soon).

For what it’s worth, the Odyssey Team’s Odysseyra1n bootstrap allows the checkra1n jailbreak tool to do the heavy-lifting on A8-A9 devices while still providing an Odyssey-esque user experience, so this isn’t that big of a problem for now. On the other hand, the Odyssey Team is expected to release version 1.2.1 of its jailbreak tool very soon to resolve the aforementioned issue, at least for A9-equipped handsets.

If you followed the jailbreaking best practices and you stayed on iOS 13.5.1-13.7 without upgrading to iOS 14 earlier this Fall, then you’re now in a good position to jailbreak your handset. You have the option of using Odyssey right now, or you could continue waiting for Pwn20wnd to update the unc0ver jailbreak. This will depend on which bootstrap and package manager you prefer.

Even if you’re running iOS 13.5 or older, if you’ve been using the Odyssey jailbreak, then you may want to download the latest version and deploy it on your device. It includes plenty of bug fixes and improvements that may help your jailbreak feel more performant and stable.

The latest version of the Odyssey jailbreak can be had from the Odyssey Team’s theodyssey.dev website. Once downloaded, you may follow the steps in our detailed step-by-step tutorial showing you how to get jailbroken with Odyssey using AltStore.

Will you download the latest version of Odyssey and jailbreak iOS 13.5.1-13.7? Let us know in the comments section down below.