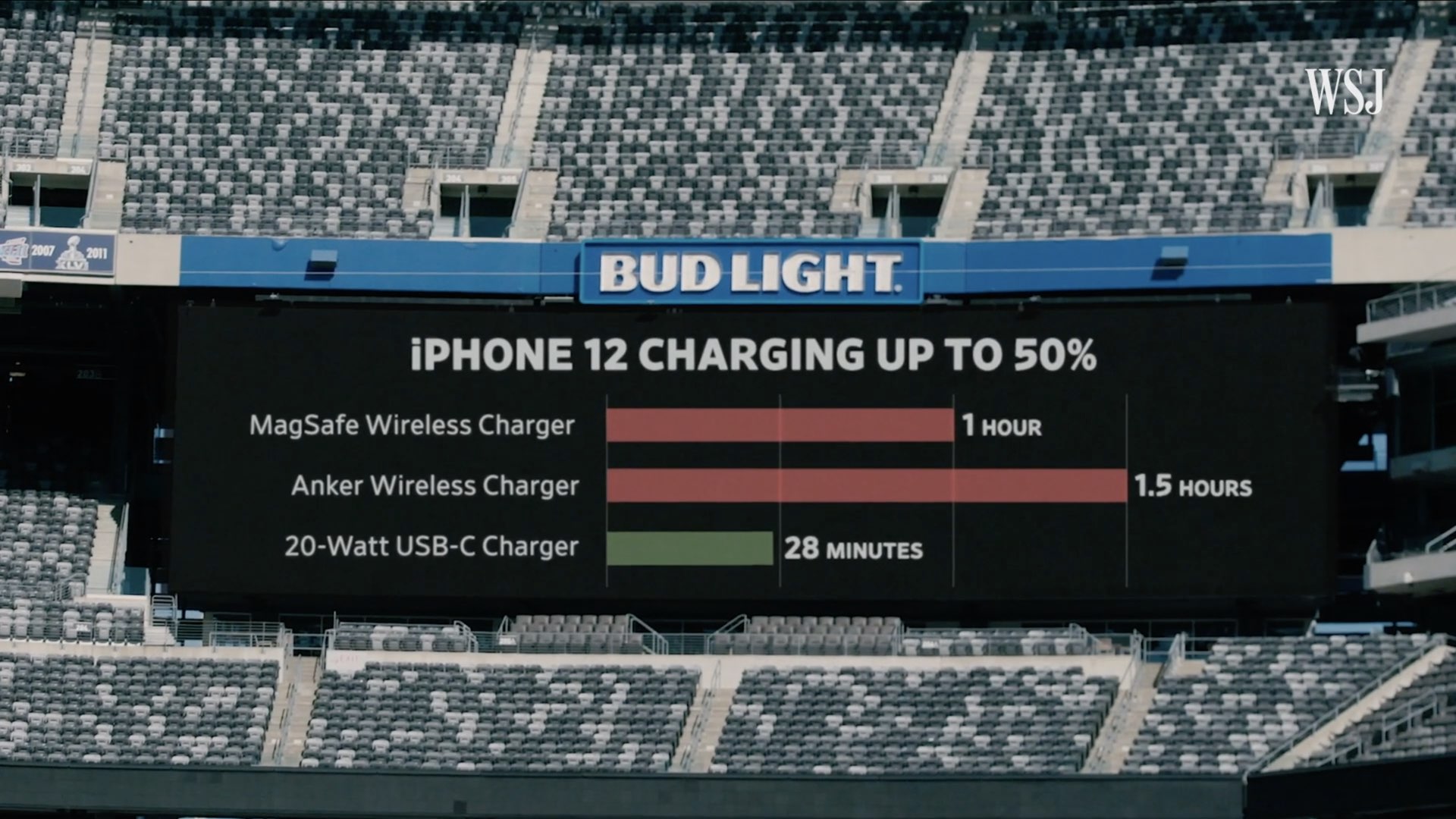 Apple’s new MagSafe charger for the iPhone 12 family doubles the wireless charging speed but is still slower compared to the wired solution. Concretely, the Wall Street Journal’s Joana Stern found out in her video review of the new iPhones that the magnetic charger charges an iPhone 12 more than 2x slower than a 20-Watt USB-C charger with fast-charge support.

It’s hardly surprising that a MagSafe charger would charge an iPhone slower than the wired solution. After all, MagSafe provides up to 15 Watts of power versus 20+ Watts of wired power.

You can even put a Qi-enabled iPhone on a MagSafe puck and have it treat the MagSafe puck as a 7.5-watt Qi charger (the new iPhones are still limited to 7.5 watts when using regular Qi wireless chargers). MagSafe technology is not compatible with the Apple Watch.

From John Gruber’s review of the iPhone 12 and iPhone 12 Pro:

When you put an iPhone 12 into a MagSafe case or on a MagSafe charger, the phone emits a delightful little bloop and briefly displays an indicator on screen. When connected to a charger, this circle acts as a gauge for the phone’s current charge. The size and location of this indicator on the display corresponds exactly to the size and location of the MagSafe connector attached to the back of the phone — nice. This sort of spatial awareness of the on-screen software and device hardware brings to mind the volume meters that are aligned perfectly with the volume up/down hardware buttons.

The $39 MagSafe charger is available to purchase now. The folding Duo Charger, with MagSafe on one side and an Apple Watch charger on the other, will launch later this year.

Both the 2018 iPad Pro and the 2019 iPhone 11 series came with Apple’s then new 18-watt adaptor in the box. That power adapter was compatible with the USB Power Delivery protocol, allowing it to fast-charge an iPhone 8 or later via a Lightning-to-USB-C cable. The fast-charge function permits a compatible iPhone to go from dead to fifty percent battery in 30 minutes.

→ How to fast charge your iPhone

Starting with the latest iPhone 12 family, however, neither the aforementioned charger nor Apple’s Lightning-based wired EarPods earphones are included in the box (to help preserve the environment, says Apple). At the same time, Apple’s replaced the standalone 18-Watt USB-C power adapter with a bit faster USB-C charger at 20 Watts of power. Also, Apple has updated the design of the boxes for other iPhones, including the iPhone 12 family and the iPhone SE, and no longer bundles power adapters and earphones with these products. 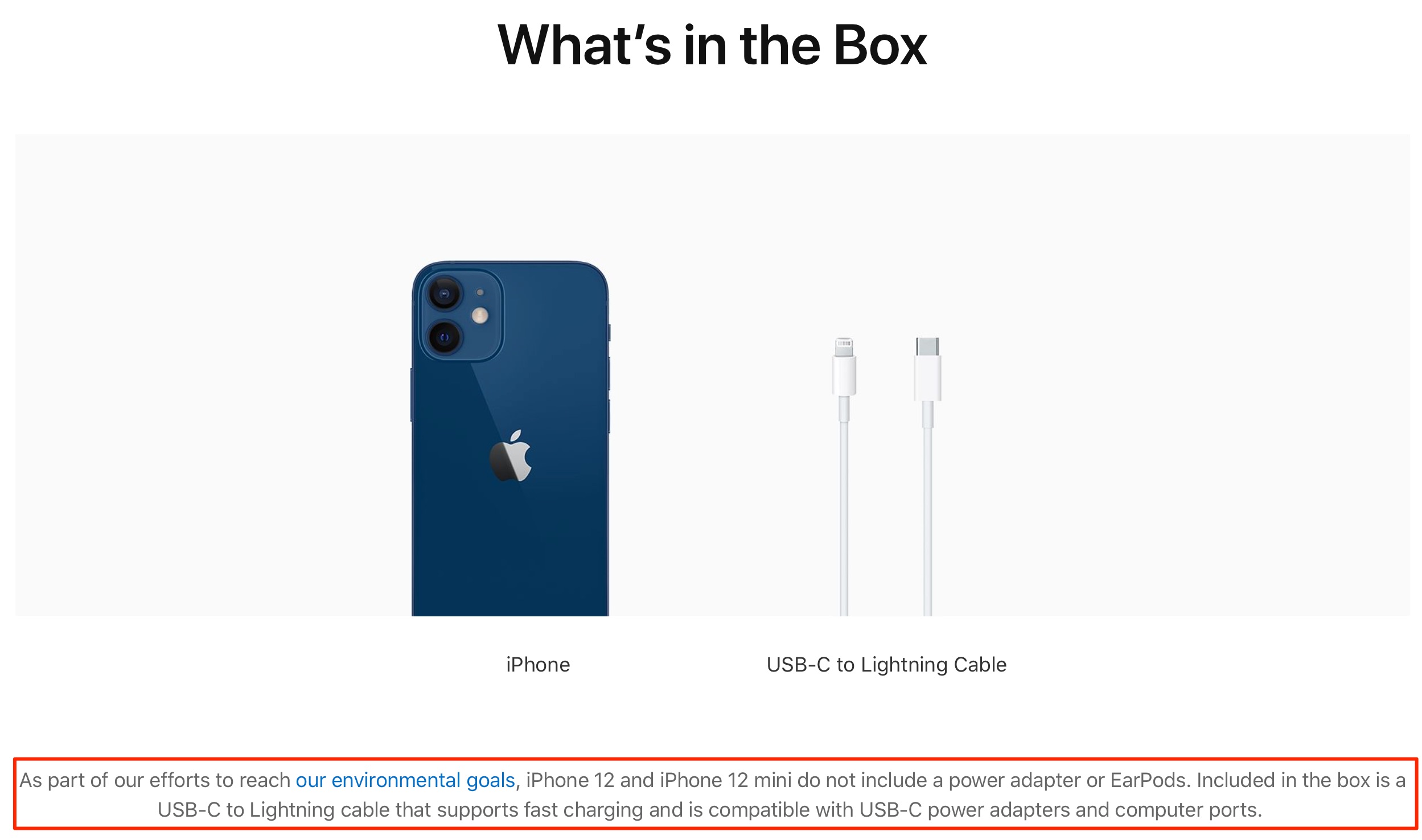 “As part of our efforts to reach our environmental goals, this iPhone does not include a power adapter or EarPods,” per the fine print. “Included in the box is a USB‑C to Lightning cable that supports fast charging and is compatible with USB‑C power adapters and computer ports.”

→ The best wireless chargers for iPhone, AirPods and Apple Watch

Customers can use their existing USB‑A to Lightning cables, power adapters and headphones. Apple’s Vice President of iPhone Marketing, Kaiann Drance, commented on the lack of a power adapter in the box in an interview with Rich DeMuro on the Rich on Tech Podcast.

Here’s what she said:

You can still use your old Lightning cables and any of those power adapters that work with that. Any of those will still work. In fact, we encourage you to still use those as well. If you do need a new one, we did include a USB-C-to-Lightning cable in the box. It’s different because it’s more modern, it’s faster.

For those wondering, the included USB-C-to-Lightning cable can be used with any USB-C-based power adapter. But where can you get one of those? Drance has a few ideas…

Well, you might already have one if you have either another smartphone product or another consumer electronic product. In the past couple of years a lot of those have moved towards those Type-C adapters. If you’re an Apple user and you happen to have a Mac or an iPad, we’ve also included those USB-C power adapters in recent years for those products, and the computer ports themselves include USB-C.