Back in September of last year, Apple confirmed if you bought new hardware capable of streaming Apple TV+, you’d get a year’s worth of the service for free.

Update (10/16/2020): Apple has officially confirmed the move to extend free trials of Apple TV+ until February 2021. The company sent out emails to those who fall into the initial trial, which began last year, letting them know of the extension: 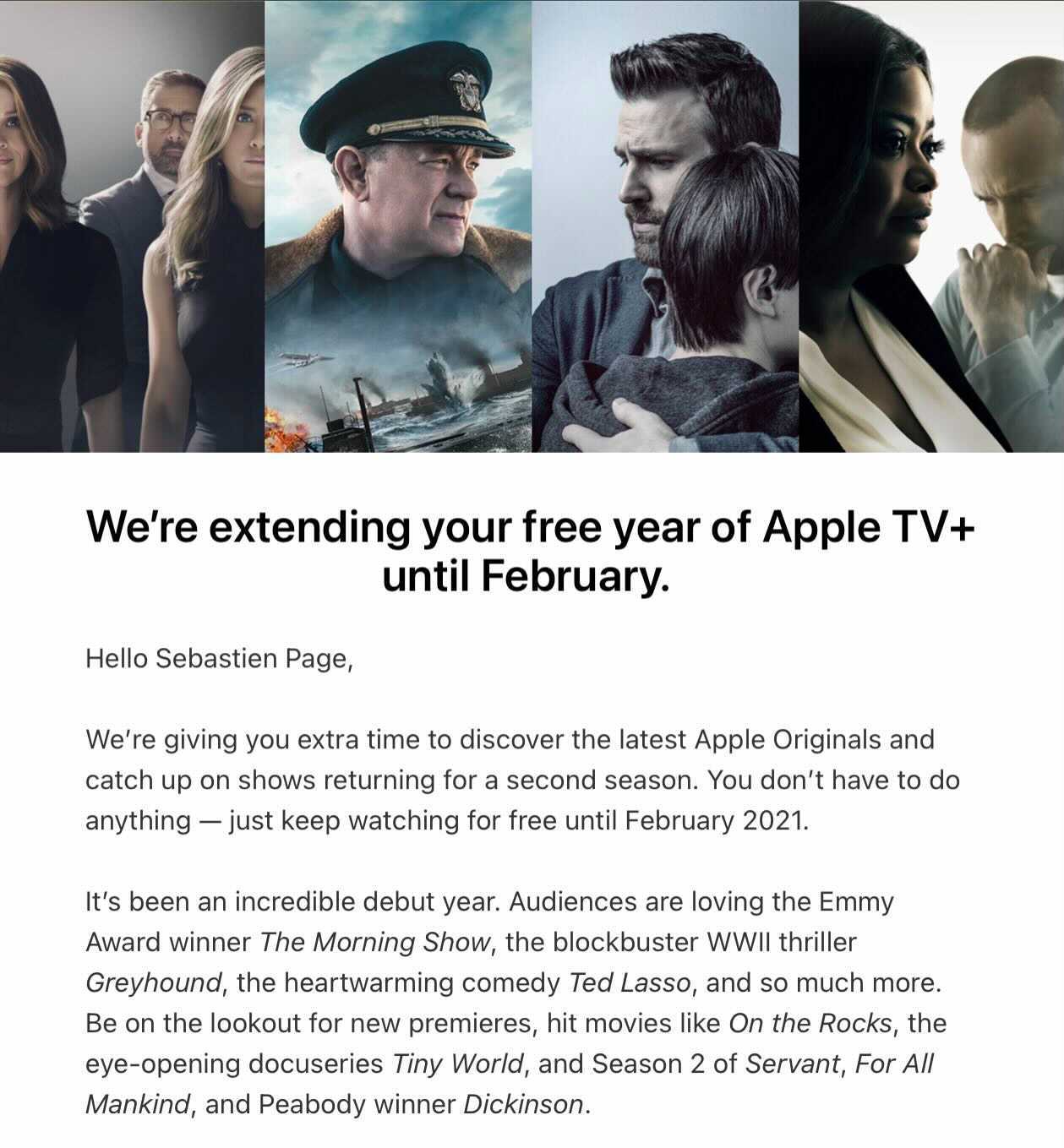 Apple TV+ launched with a handful of content on November 1, 2019. To help get people watching, Apple offered a year’s worth of a free trial for Apple TV+ to customers who bought devices like a Mac, an iPhone, iPad, or (of course) an Apple TV. That free trial was originally about to expire at the end of this month. However, a new report from 9to5Mac tells us that won’t be the case for folks who jumped on board the trial offer.

According to the report, Apple is extending the free trial period for customers to February of next year.

The report says that if you are on a monthly or yearly Apple TV+ plan, you’ll be getting store credit to cover the cost of the service. The refunds and extensions will be automatically applied to each user’s account, so they won’t have to do anything extra to get them. The report says “email notifications” will be going out to customers soon.

There’s more, with a breakdown of how this applies to customers taking advantage of the free trial:

Here’s the breakdown. If you started a free year of Apple TV+ between November 1st and January 31st, your end date for your free trial will now last until the end of February, giving you up to an extra three months of free access. If you signed up in March or later, there will be no change as your trial already lasts beyond the February date.

If you are on a yearly plan of Apple TV+ through that ‘extra 3 month’ period, you will be automatically credited for those months. Similarly, if you pay for Apple TV+ monthly between November and January, your Apple ID will be credited with the same amount ($4.99 per month in the US, for instance). This credit can be spent on anything from the iTunes Store, like a Hollywood movie rental, or the App Store or used to pay for any Apple service billed to your account. (Credits will also be distributed if you begin paying for Apple TV+ as part of an Apple One bundle, which is set to launch later this year.)

It’s worth noting that Apple is still offering the year’s worth of free service for Apple TV+ to customers who buy a new Apple product capable of streaming the service. However, if you have already claimed your free trial, you can’t get another. So even if you plan on upgrading to the iPhone 12 after Apple announces it next week, it doesn’t look like you’ll get another free year of service.

The timing is certainly interesting. Apple has some big content coming to the service, including the Sofia Coppola-directed On the Rocks starring Bill Murray and Rashida Jones. Earlier today, Apple TV+ also confirmed that the second season of its Peabody Award-winning Dickinson will premiere in early January of next year.

Plus, this gives people more time to start watching Ted Lasso, which is fantastic.

Are you excited to get a few extra months of Apple TV+ without getting charged for it? Do you plan on keeping the service after the free trial ends?