The jailbreak community lost a valuable asset on Friday as renowned hacker and security researcher Brandon Azad, known for his involvement with Project Zero and for his work in discovering tfp0 exploits for iOS and iPadOS alike, was hired by Apple.

Azad made the shocking announcement Monday afternoon via Twitter, noting that the bittersweet transition to Apple’s side of the security research fence would begin as soon as next week: 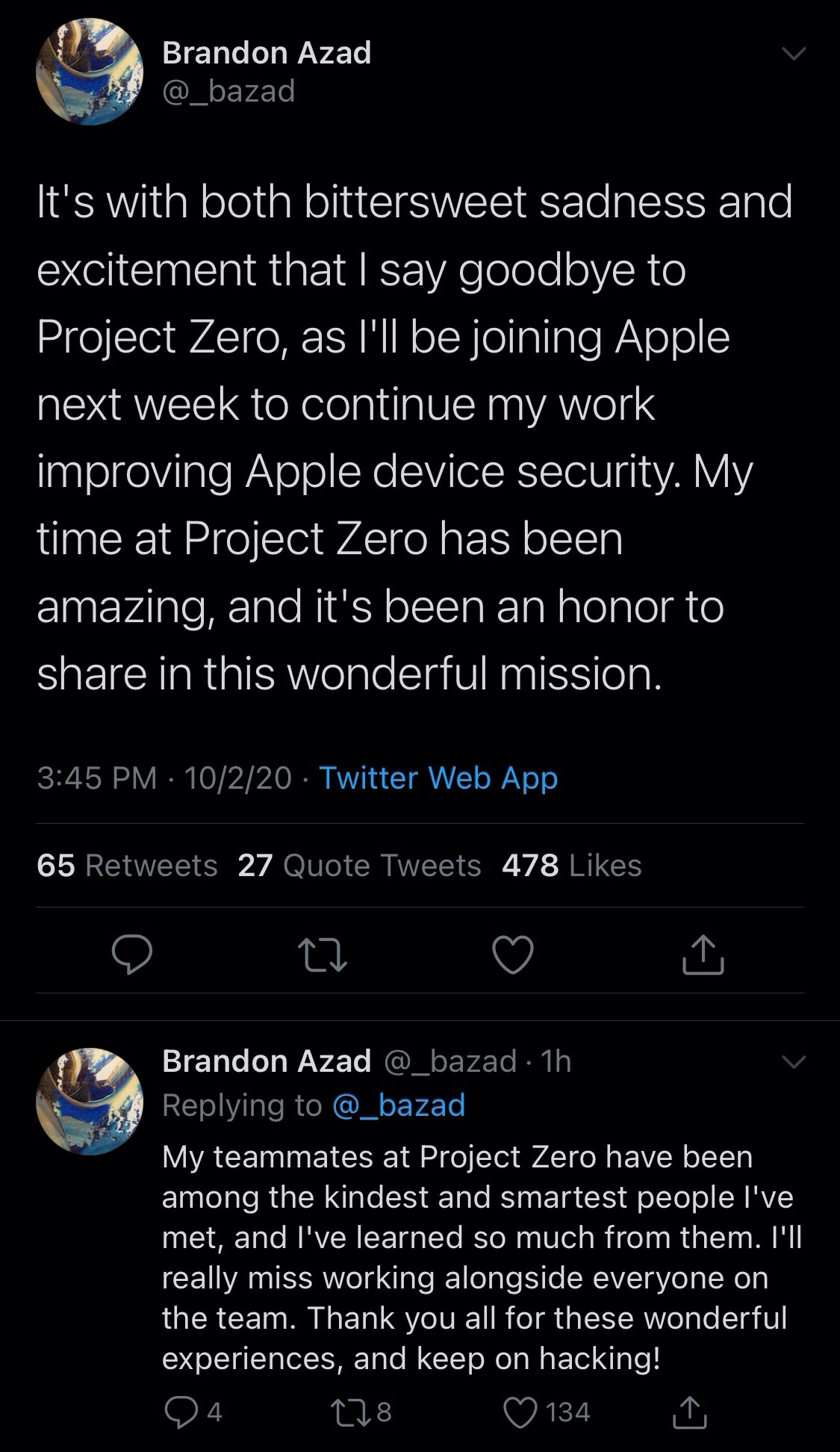 For those unaware, a number of Azad’s tfp0 exploits were instrumental in the creation of several popular jailbreak tools in recent memory, including Chimera, Electra, and unc0ver to name a few. Some of those exploits included voucher_swap and oob_timestamp to name a few.

In an era when jailbreaking seemed to be dying, Azad assumed the role of a beacon of hope for the community. His myriad of exploits made it possible for the Electra Team, Chimera Team, and unc0ver Team to pull it together and continuously update their jailbreaks with new firmware support. Other prominent hackers contributed exploits on several other occasions, of course, but for now we’ll focus primarily on Azad.

Azad’s departure from the private hacking scene couldn’t have come at a more desperate time as iOS and iPadOS 14 appear to have implemented new security mechanisms that will make developing jailbreaks for them more difficult. Apple’s acquisition of the talented security researcher could also mean more secure updates to iOS and iPadOS in the future.

As bleak as things may look for the jailbreak community at first glance under these circumstances, it’s important to remember that we’ve all been here before – remember when Apple snagged comex? And yet, here we all are, with the checkm8 bootrom exploit and a plethora of other tfp0 exploits to go around.

The jailbreak community’s beating heart still beats strong, and several jailbreak teams continue to support modern jailbreaks including checkra1n, Odyssey, and unc0ver. More recently, another Tweet made headlines, suggesting that we could potentially see yet another jailbreak in town very soon.

The moral to the story is this: Yes, we lost some serious talent to Apple today. On the other hand, there’s no shortage of talent in the jailbreak community today, and with a little teamwork, there’s nothing that talent can’t do. After all, nothing is entirely un-hackable. Someone always seems to find a security hole in everything, no matter how “secure” Apple’s marketing team makes things sound.

Some doomsayers will disagree with me, but history is on our side. That said, while I congratulate Azad on his new gig, I remain optimistic that it won’t be the end of things for the jailbreak community.

How do you feel about Apple acquiring talent from the jailbreak community? Share your thoughts in the comments section below.