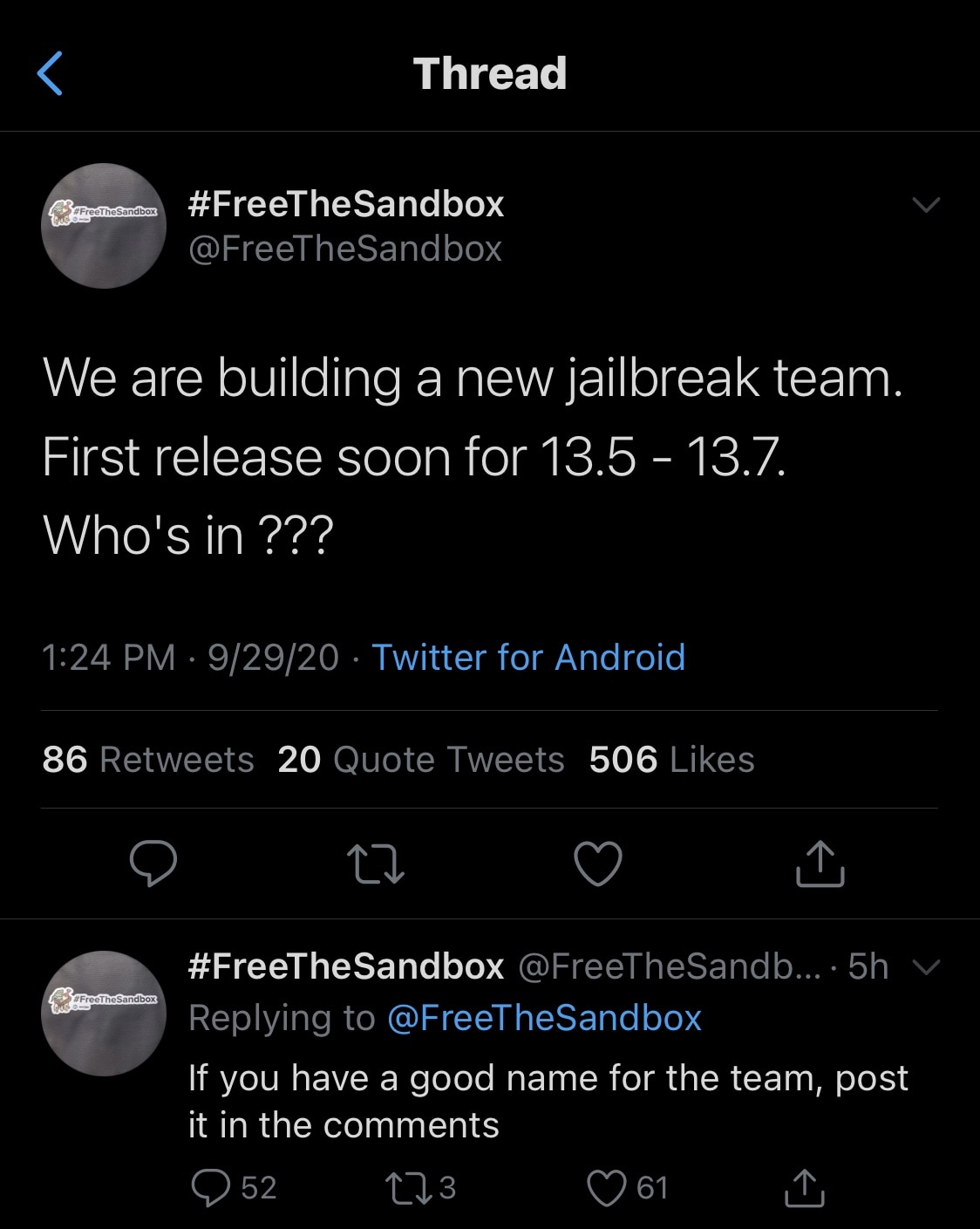 The latest available jailbreaks at the time of this writing are Odyssey and unc0ver, each of which support up to and including iOS and iPadOS 13.5 on all devices. With that in mind, one Tweet in particular shared this Tuesday evening by the Twitter account @FreeTheSandbox appears to be turning quite a few heads in the jailbreak community.

The Tweet, illustrated in the screenshot above, appears to tip off that a yet-to-be-named jailbreak team is in the midst of forming and that it will work on a jailbreak tool that will support iOS and iPadOS 13.5 to 13.7.

At first glance, many will raise an eyebrow and have reservations about whether the claim can be trusted or not. This is totally understandable, and we’re happy to say that the claim looks legitimate.

Operation #FreeTheSandbox is an initiative started by security research team ZecOps, a member of which recently took to Twitter to announce a brand-new exploit that could be used to jailbreak iOS and iPadOS 13.7. A coincidence? We think not…

Worthy of note, the initial Tweet appears to be recruiting members for a jailbreak team, which speaks to the project’s infancy. The second part of the Tweet, on the other hand, reveals that a release is imminent, which in my personal opinion seems abrupt given that this team doesn’t even have an official name yet and is still recruiting members.

In a follow-up Tweet, the aspiring team-to-be currently appears to be accepting submissions for an official name, as it seems to need help in choosing one. Jailbreakers may reply to the Tweet with their suggestions for consideration.

It’s worth noting that an iOS and iPadOS 13.7 exploit will soon be shared with Pwn20wnd, and eventually, with the rest of the world via a ZecOps blog post. It remains to be seen if the existing Oydssey and unc0ver jailbreaks will add support for firmware newer than iOS and iPadOS 13.5, but if so, then they could be competing with a new jailbreak at some point.

Unfortunately, iOS and iPadOS 13.7 and older are no longer signed by Apple. Those who already upgraded to iOS or iPadOS 14 and are looking to jailbreak a device that checkra1n doesn’t already support are advised to stay where they are and refrain from any additional software updates.

Are you excited to see what becomes of the latest jailbreak-oriented news? Share your thoughts and reservations in the comments section below.