Not even one week after Apple officially released iOS and iPadOS 14 to the general public, the checkra1n team has released checkra1n version 0.11.0 with support for Apple’s latest and greatest mobile operating system (albeit with a catch). 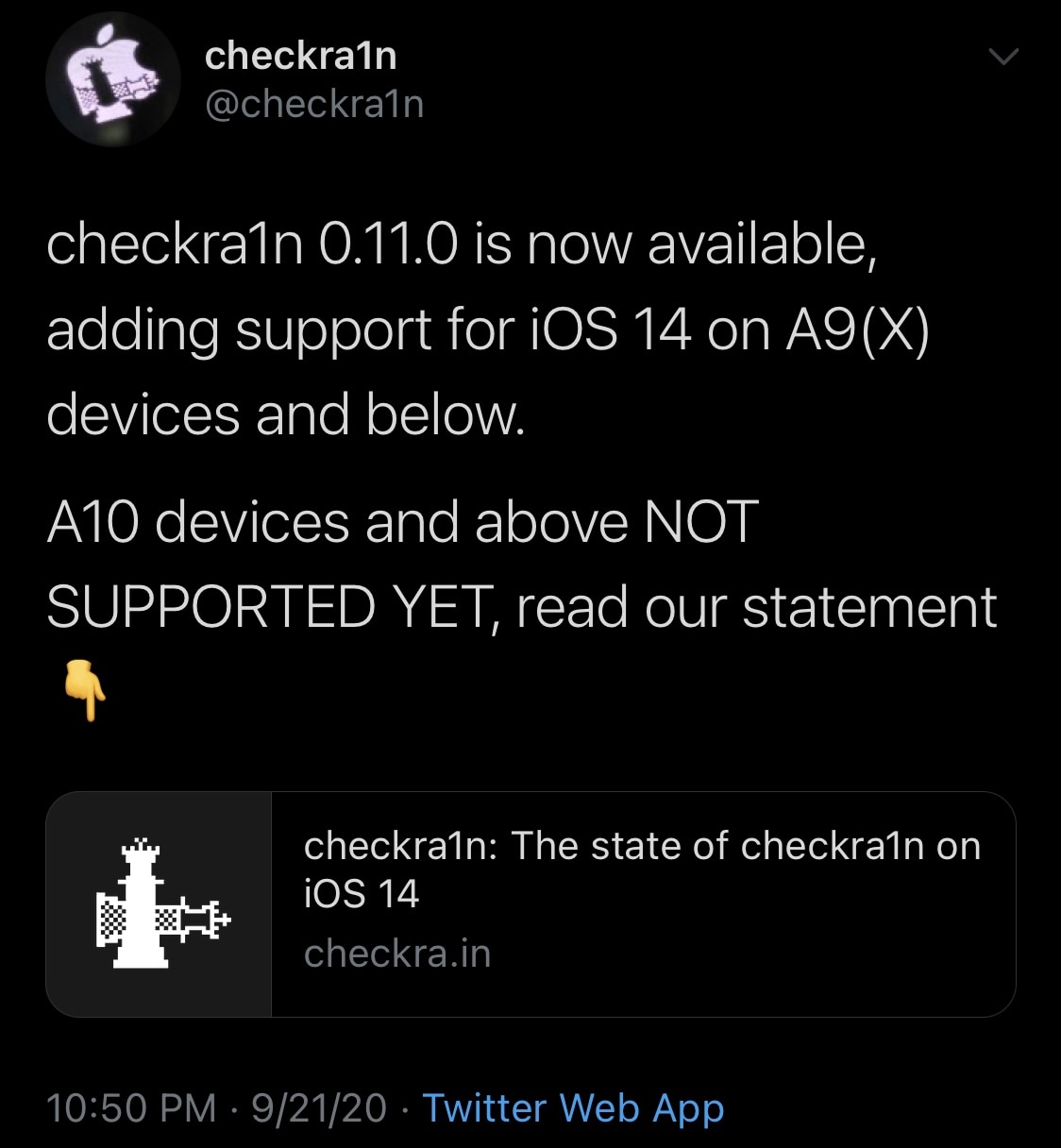 From what we can gather, checkra1n v0.11.0 supports iOS 14, but only on handsets with A9(X) or older processors. The checkra1n team plans to add support for newer devices that are affected by the checkm8 exploit in the future, but this will take time and effort as Apple apparently made it more difficult to deploy the checkm8 exploit on newer affected handsets by implementing a security mitigation.

The checkra1n team explains the situation in a blog post:

In iOS 14, Apple added a new mitigation to SEPOS on A10 and above (except on Apple TVs and iBridge): if the device was booted from DFU mode and the Secure Enclave receives a request to decrypt user data, it will panic the device. Since checkm8 does not give us control over the Secure Enclave, this is not trivial to work around. However, with the recently published blackbird vulnerability, we are able to get control of the Secure Enclave on A10 and A10X and disable this mitigation. Support for A10 and A10X devices is being worked on and is expected to be ready in the coming weeks.

For what it’s worth, the checkm8 exploit can’t be patched because it’s a hardware-based exploit. What Apple can do, however, is add more layers of troublesome security to its software as they have in iOS 14. This makes it more difficult, although not impossible, to get checkra1n working on newer handsets that have been updated to the latest mobile operating system. This is why the checkra1n team requires more time.

There’s no concrete ETA as to when the checkra1n jailbreak will add support for all devices newer than A9(X), but the checkra1n team has provided the estimation of “the coming weeks” for A10 and A10(X) devices. Unfortunately, they aren’t yet sure if it will be as easy to apply the same patches to A11 devices like the iPhone X.

The checkra1n team’s transparency with regard to iOS 14 support is both appreciated and commendable, as it keeps those of us who closely follow these developments in the loop and helps us better understand what’s happening behind the scenes. Making a broad statement with no exact ETA was also a good move, as the checkra1n team doesn’t want to over-promise and under-deliver – no one does.

Other notable changes in checkra1n v0.11.0 include:

– Fix an issue with userland kernel patch finder that prevented checkra1n flags from being saved as well as exporting kernel information used by developers to tfp0, affecting devices running iOS 13.6 and up.
– App can now be launched from DMG on macOS
– Demotion is now working on Linux
– Fixes the -20 error for Apple TV 4K by enabling USB on v1.x standard breakouts

At the time of this writing, these are the devices that checkra1n already supports on iOS 14:

These are the devices that should be supported in coming weeks:

And these are the devices that the checkra1n team isn’t yet entirely certain about:

If you’re using anything newer, and you’ve already upgraded to iOS 14, then you still have the chance to downgrade to iOS 13.7 before Apple stops signing it later this week. There isn’t yet a jailbreak for iOS 13.7, but if you follow the advice of the community’s leaders and stay on the lowest possible firmware, then your chances for jailbreak eligibility increase.

As always, the latest version of the checkra1n jailbreak can be downloaded from the official https://checkra.in website. Don’t get the jailbreak tool from anywhere else for your safety. If you need help, then you can follow either of the tutorials below to jailbreak with checkra1n:

Are you excited to learn about the progress being made on the checkra1n jailbreak? Share your thoughts in the comments section below.