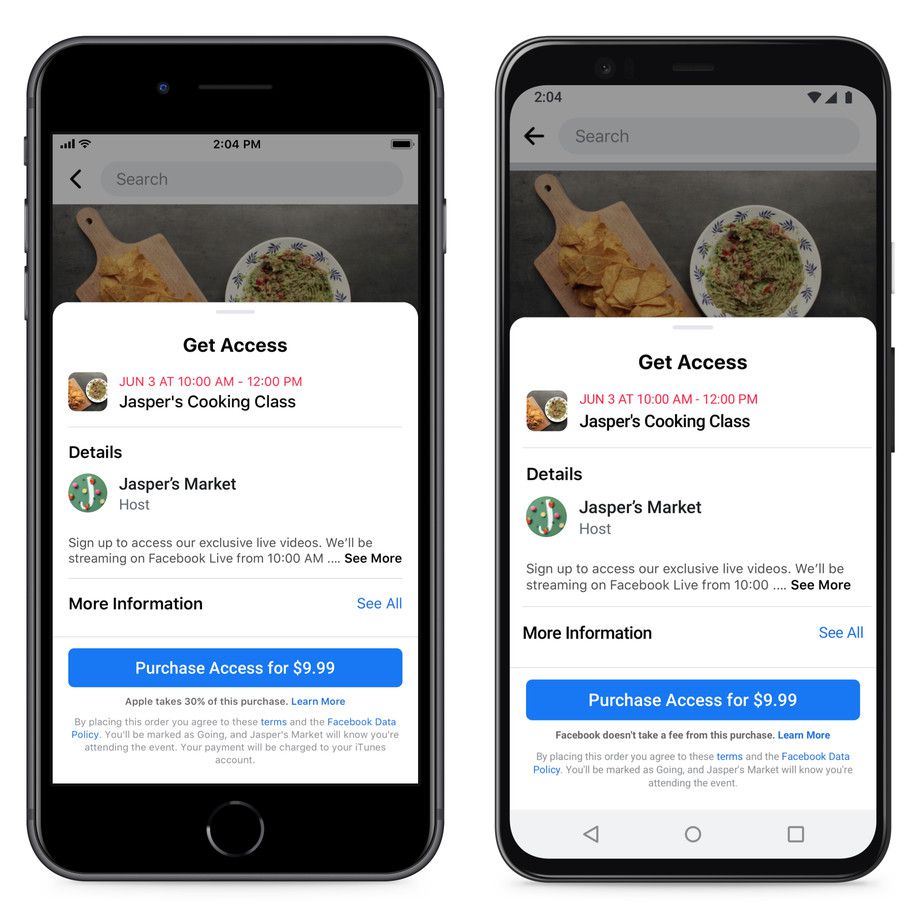 Update (09/25/2020): While the original report notes that Apple expanded this temporary leniency to other developers beyond Facebook’s app, a tweet from Walter Bloomberg appears to suggest that Apple’s extending this to all app developers:

That’s good news, and we’ll still have to wait and see if it extends beyond the end of 2020.

It’s not a secret that Apple charges a 30% fee for purchases made within the App Store. As such, some companies avoid in-app purchases altogether in some way or another. The platform fee is there, and sometimes it can be a pretty big hindrance to developers. Facebook has taken exception to this platform rule many times, and Mark Zuckerberg, Facebook’s CEO, has stated Apple charges “monopoly rents” in its digital storefront.

Now, Facebook has earned itself a win. While Facebook said it would not be collecting any fees for events organized through its new digital platform until August of next year, Apple didn’t make the same claim at the time. As such, that 30% fee was still in play. That would mean less money for small businesses if they did set up an event through the new service, according to Facebook.

Fidji Simo is the head of Facebook’s app, and said in August:

We asked Apple to reduce its 30% App Store tax or allow us to offer Facebook Pay so we could absorb all costs for businesses struggling during COVID-19. Unfortunately, they dismissed both our requests and [small businesses] will only be paid 70% of their hard-earned revenue.

According to a report from The Verge, Apple has backed down on this stance. Apple is going to allow Facebook to avoid these fees. And, what’s more, event organizers will be allowed to use Facebook Pay to book these online events. This policy will last until the end of 2020, and it does not work for Facebook Gaming organizers.

According to the repot, Apple has confirmed the change. The company also states that this is not the first time it has done so, especially in light of the ongoing coronavirus pandemic. Apple says it has also worked out deals with companies like ClassPass and Airbnb. For Facebook Gaming creators, the situation isn’t changing because the pandemic hasn’t altered their business model in a major way.

It’s interesting that these battles keep playing out in such a way that it appears Apple is backing down in one way or another. Facebook’s argument here is similar to Epic Games’: that Facebook is the “small guy” and Apple is this huge monolith keeping it down. In this regard it worked out for Facebook. It hasn’t worked out for Epic quite yet, even as it continues its #FreeFortnite campaign.

Hopefully this actually helps small businesses that are struggling during this time. It will be interesting to see what happens in early 2021, considering these deals end by the end of this year.