If you are a Verizon Wireless customer and want to take full advantage of a new bundle option coming this week, you may need to make some changes to your plan if you aren’t already a Mix & Match subscriber.

Today, Verizon announced that it is extending its partnership with The Walt Disney Company, which will bring that company’s major streaming services to a new bundle for the wireless carrier’s customers. Specifically, select Mix & Match unlimited plans will now get access to not only Disney+ (a deal that Verizon launched last year), but also ESPN+ and Hulu at no additional cost. That’s a potential savings of almost $30 per month if you were to subscribe to each service individually (depending on your rate plans).

And don’t forget that select unlimited plans with Verizon are also equipped with Apple Music at no additional cost as well.

The new bundle promotion is available for select plans, as mentioned above, but how it all works is a little convoluted. It’s broken down in the image below, but here’s how it looks in text: 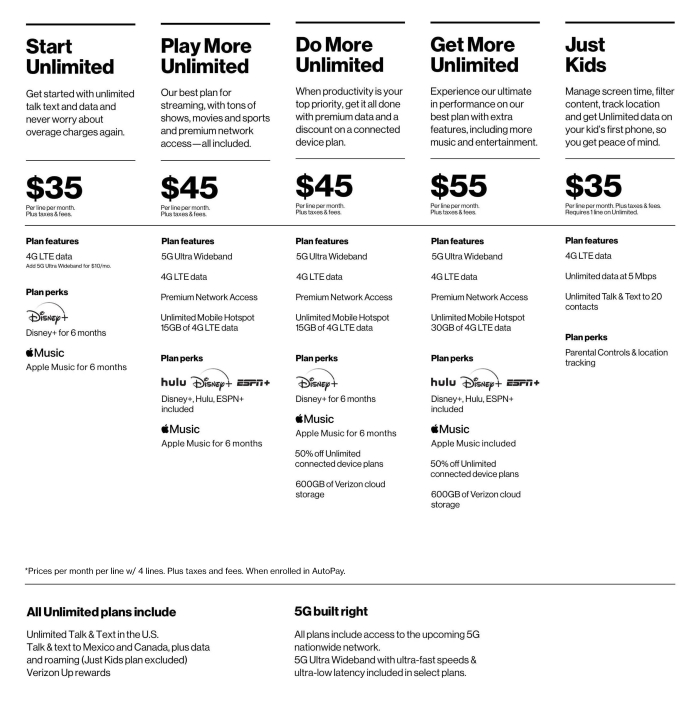 There is also a “Just Kids” option, but that doesn’t come with any of the new perks.

Our new Mix & Match plans make the choice clearer than ever: customers get the best network and the best value with Verizon,” said Frank Boulben, SVP Marketing and Products of Verizon Consumer Group. “We led the industry by giving customers Disney+ on us. Now we’re adding The Disney Bundle, which includes Disney+, Hulu and ESPN+, for more entertainment choices that appeal to a variety of interests. We can’t wait to see what customers choose to suit their needs

Verizon notes that the new Mix & Match unlimited plans also all come with 5G Ultra Wideband connectivity for supported devices (which will include the iPhone 12, probably), and that won’t be an extra charge.

Do you plan on making a necessary change, if needed, to take advantage of this deal?