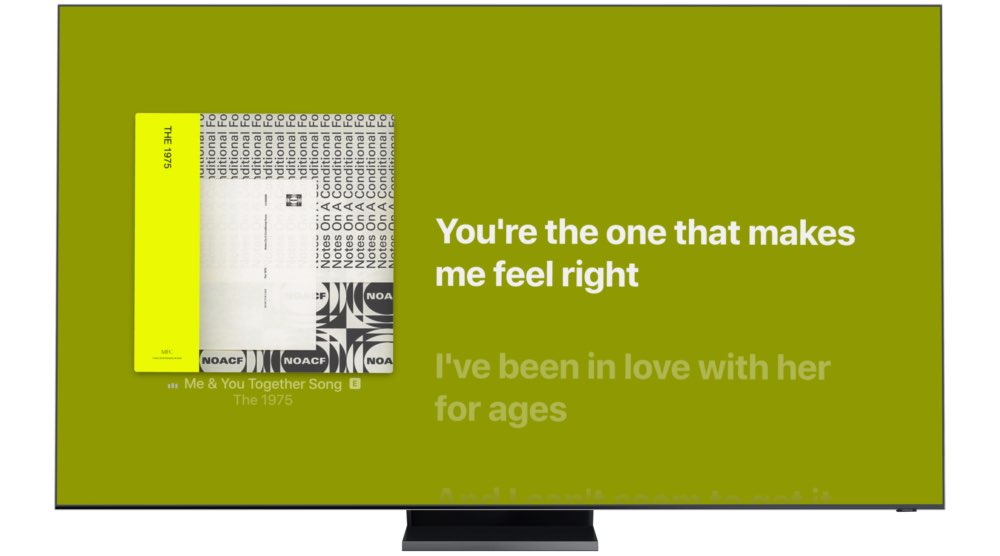 Owners of select smart TV sets from Samsung dating back to 2018 can now enjoy synchronized Apple Music lyrics that are also available across iPhone, iPad, Mac and Apple TV.

According to a press releases put out by Samsung Electronics this morning, Apple Music on the company’s smart TV models will now display millions of real-time synchronized lyrics that animate along with the music beginning today.

TUTORIAL: How to use time-synced lyrics on Apple devices

“Available on 2018 to 2020 Samsung Smart TV models, Apple Music time-synced lyrics make it easier and more fun than ever for users to sing or rap their hearts out to their favorite songs — or to discover the words of the latest hits,” reads the press release.

The feature is being added via an update to the Music app which Samsung integrated on its Smart TV platform earlier this year.

How to access synced Apple Music lyrics on Samsung TVs

You don’t need to do anything, really.

As soon as you start playing an Apple Music song that has time-synced lyrics, each verse will automatically appear on screen along with the music so you can follow along as you listen.

As you’re flipping through the lyrics or jumping from one verse to another, the Music app automatically takes you to that point in the song. You can also search Apple Music songs by the lyric, just like with the Music app on Apple’s platforms.

“With time-synced lyrics on Apple Music, each song is brought to life through a unique, colorful, and dynamic background that is generated from the album art,” Samsung noted.

TUTORIAL: How to get real-time song lyrics with Shazam and sing along

Of course, you must first download the Apple Music app to your Samsung Smart TV via the company’s Smart TV App Store. Existing Apple Music subscribers can sign into their account right away while new customers can begin the subscription process right from their TV.

I’m glad that Samsung and Apple are, for once, working together to benefit their customers. Samsung was the first major TV brand to get the Apple TV app, and they were also first to get the Music app, which I think speaks volumes about the Apple-Samsung business relationship.

Apple could have chosen to partner with any TV maker, but clearly it was willing to put all grievances aside for the good of their customers and bring AirPlay, TV and Music software to Samsung first. The fact that it’s adding new features to the Music app on Samsung’s platform tells you Tim Cook & Co. are serious about making Apple content accessible via rival platforms.

Oh, and how nice is it that owners of Smart TVs from Samsung are eligible for a free three-month trial of Apple Music with an individual, family or student subscription?