As we said before, you should be careful about shortcuts created by other people because you never know whether some of the iOS automation scripts you download may have been created for malicious purposes. Acknowledging as much, Apple with iOS 13 has stopped allowing shortcuts from friends, websites and more unless you override the default setting. In this tutorial, you’re going to learn how allow untrusted shortcuts on your iPhone and iPad which will permit you to add workflows from sources outside the Gallery section in the Shortcuts app.

Why are some shortcuts untrusted?

Untrusted shortcuts are any shortcuts you add to your iPhone or iPad from sources outside the Gallery section in the Shortcuts app itself. These often come not only from your friends who may send you a cool shortcut via email or Messages, but also your favorite websites and more.

If you attempt to download an untrusted shortcut from a specific website, you will see a warning saying your security settings don’t allow untrusted shortcuts. Admittedly, the prompt could have been more helpful — all Apple provides is an OK button instead of, for example, actually allowing you to change your Shortcuts privacy settings right there and then.

Before you are allowed to import shared workflows into the Shortcuts app, you must first allow untrusted shortcuts in Settings and our step-by-step tutorial embedded ahead shows you how.

How to allow untrusted shortcuts

Follow these steps to permit the installation of untrusted shortcuts on an iPhone and iPad:

Now you can download and install shortcuts from sources outside the Shortcuts app’s Gallery section, such as those from friends, websites and other non-Apple sources. 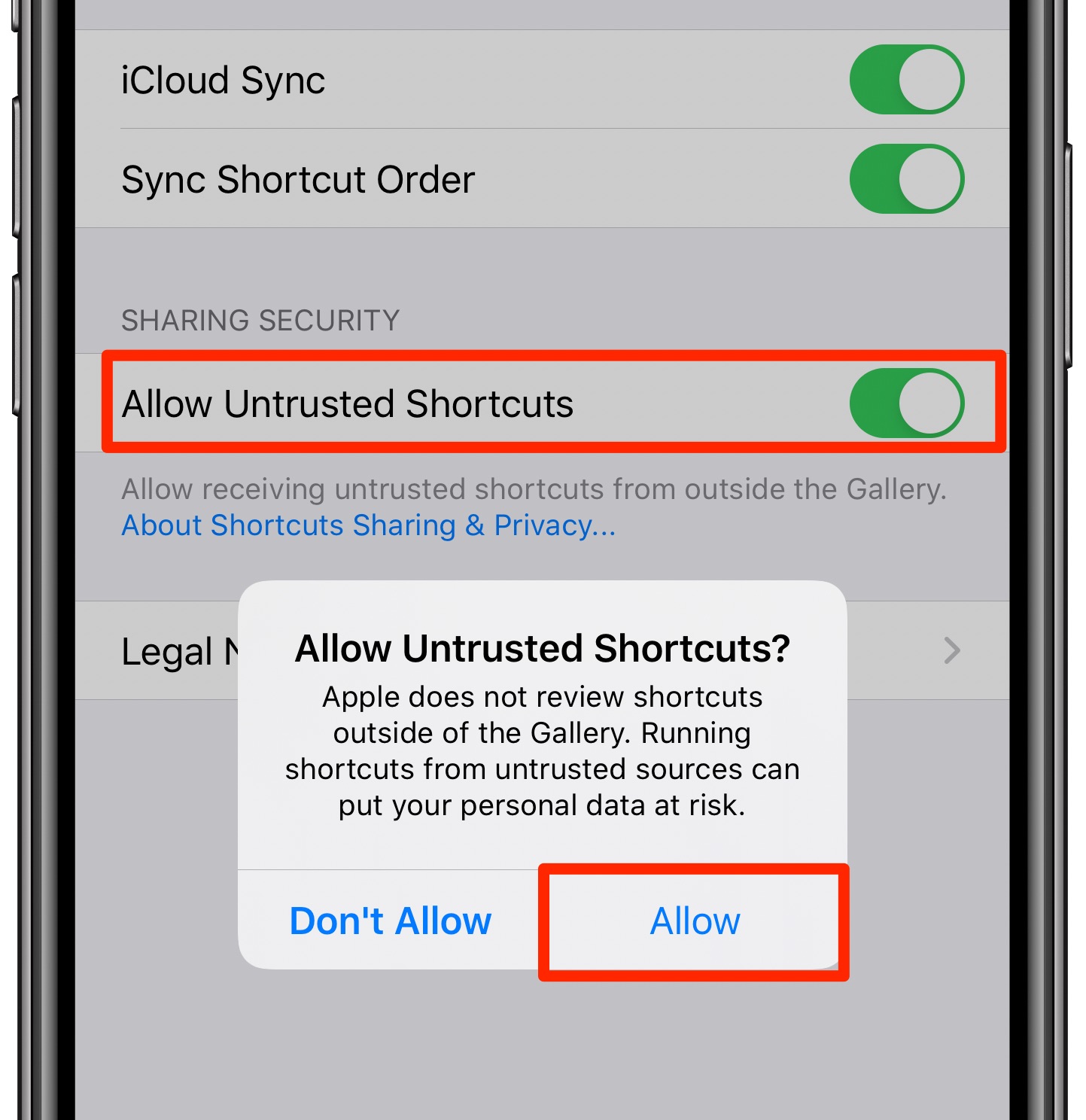 Don’t even see such an option? You must run a shortcut first to make it appear: fire up the Shortcuts app on your device, go to the Gallery tab, then install and run a shortcut from there first. Doing so will make the option to allow untrusted shortcuts appear in the Settings app.

And quite frankly, that’s all there’s to it!

Untrusted shortcuts and your security

As mentioned earlier, Apple does not review shortcuts. It considers all shared shortcuts added from outside the Gallery section untrusted. After changing your Shortcuts security settings as described above, you will be able to install shared shortcuts without that security warning getting in the way.

As Apple itself cautions:

Shortcuts that are downloaded from the web or shared with you by others may not have been reviewed by Apple, and Apple has no control over, and assumes no responsibility for, the content or functionality of those shortcuts.

In other words, you’re wholeheartedly advised to review any shortcuts downloaded from the web or shared with you in order to confirm they function as you expect.

You control which shortcuts access your personal information, like your location, contacts, health data, payment information or the contents of your documents. You can review and control the data that a shortcut has access to in its Details section.

Apple during the WWDC 2019, brought a couple of notable changes to the Shortcuts app. Aside from it being preloaded on iOS devices (previously, it was a separate download), the app has become more conversational and now includes suggestions for things you do frequently.

For instance, Shortcuts may prompt you to add a “daily personalized routine” in an effort to streamline the daily routine you may have.

If you like this tutorial, please consider passing it along to your friends.

Got stuck? Not sure how to do certain things on your Apple device? Let us know via [email protected] and a future tutorial might provide a solution.

Submit your own how-to suggestions via [email protected].

How to rotate a monitor and use it vertically in macOS