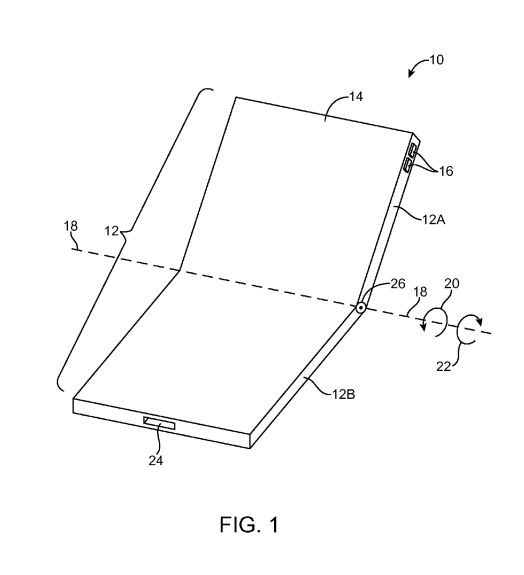 Is Apple going to make a foldable iPhone? It’s probably not going to happen soon, but it’s certainly possible that, if the market deems it necessary, we could see one some day.

And, indeed, Apple has at least gone through the steps with the United States Patent and Trademark Office (USPTO) to make sure that if it really wants to, it could launch a foldable iPhone of some design or another. Now, thanks to Jon Prosser, who shared his observations on Twitter earlier today, we may have an initial idea of what kind of design Apple is toying with, at least in the prototyping stage.

Prosser says that the foldable iPhone isn’t really a foldable design at all. That means it won’t have a foldable display like we’ve seen from devices like the new Motorola RAZR, the Samsung Galaxy Fold, and some others. Instead, it will have a design that’s similar to Microsoft’s Surface Duo, which has two display panels rather than a single foldable one. Those two screens will be combined by a hinge.

The design, in its current prototype stage, is allegedly similar to the iPhone 11. It has stainless steel edges, and it does not have a notch. Instead, this design offers a “tiny forehead” on the outer display that will facilitate the TrueDepth camera and Face ID.

The current prototype has two separate display panels on a hinge.

Prosser would follow up with a subsequent tweet that says when the phone is completely open, the displays touch in a way that makes the experience “fairly continuous and seamless”.

The memes are funny — but it doesn’t look like they just stuck two phones together.

Even though they’re two separate panels, when the displays are extended, it looks fairly continuous and seamless.

When is Apple going to launch this device? Who knows! Prosser’s tweets only touch on the design, which, as mentioned above, is simply in a prototype stage right now. We aren’t likely going to see a brand new, revolutionary design for the iPhone this year, but maybe in the next two to three? It will really come down to whether or not Apple feels like there is a reason for that type of device’s existence. Of course, even if Samsung’s, or Motorola’s, or LG’s, or whoever else’s phones don’t really take off, Apple may still feel like it’s time to change up the design and offer something new.

Or hey, maybe we’ll just see a foldable iPad with 5G instead.