Ever since the unc0ver jailbreak picked up support for iOS 13.0-13.3 with Brandon Azad’s oob_timestamp exploit (and more recently, Jake James’ time_waste exploit), this support has been limited to A12(X)-A13 devices. Pwn20wnd was rather noncommittal with regards to adding support for A8-A11 devices since they’re already supported by the bootrom exploit-based checkra1n jailbreak, but that could now be on the verge of changing.

According to Tweets shared just this morning by Pwn20wnd, it seems that support for A8X-A11 devices on iOS 13.0-13.3 is very near to becoming a reality: 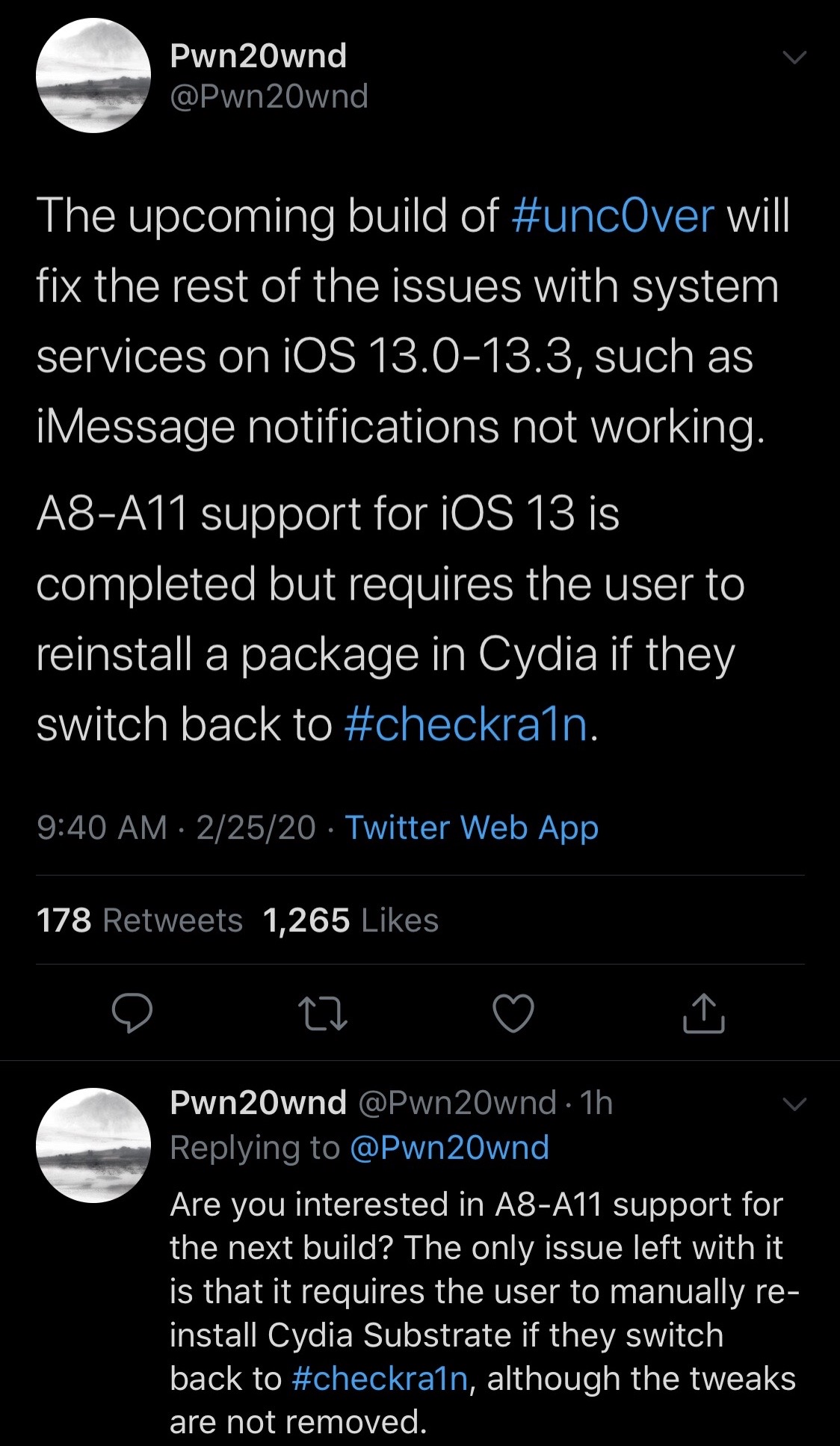 Support for A8X-A11 devices is allegedly already completed and just needs to be incorporated into the actual jailbreak tool itself, which could happen as soon as the next public release. What’s more is the update will apparently resolve the rest of known issues with system services on iOS 13.0-13.3, such as iMessage notifications not working as expected.

Pwn20wnd has already issued an internal seed to beta testers including @Samg_is_a_Ninja and @xerus, among others. Many have come out teasing the upcoming release, noting that the tool will be easily interchangeable with checkra1n and that it’s incredibly fast:

The screenshots appear to depict unc0ver v4.2.0 as the official version number, although that’s subject to change before release. The current version at the time of this writing is v4.1.1.

According to Pwn20wnd, it should be rather easy to switch between checkra1n and unc0ver. The only downside is that users will need to manually reinstall packages after making the switch.

Still, this could be a matter of convenience for those who’ve borrowed someone’s Mac to jailbreak with checkra1n and are no longer able to access said Mac. Unc0ver can be deployed without the use of a computer, as long as signing services are up and fully operational, and it can also be installed via AltStore or Cydia Impactor. On the other hand, checkra1n supports any firmware up to and including iOS 13.3.1, whereas unc0ver only supports up to iOS 13.0.

Are you excited about this upcoming update for the unc0ver jailbreak? Discuss in the comments section below.