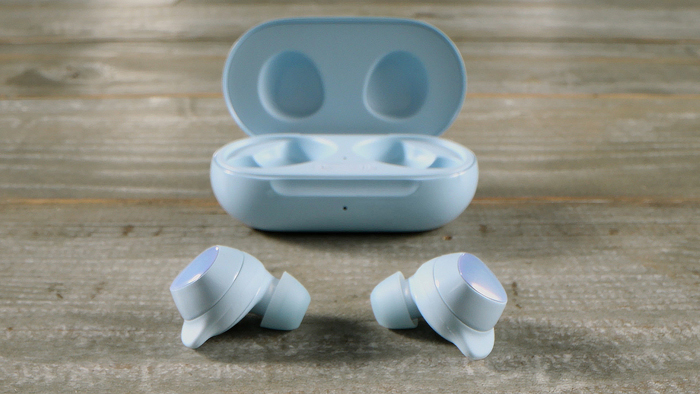 Samsung is not a stranger to the truly wireless headphone market, and so it’s no surprise the company is trying again with its latest effort, the Galaxy Buds+.

Announced today following the unveiling of the Galaxy S20 series and the Galaxy Z Flip, Samsung officially announced its newest truly wireless in-ear headphones, the Galaxy Buds+. They share some similarities with Apple’s AirPods, especially making it easy to connect with the wireless headphones, but also stand out against the competition as well.

First, let’s look at connecting. Samsung is following Apple’s lead here, allowing for simple pairing with many Samsung-branded smartphones. There will be a pop-up window that shows the Galaxy Buds+ when they are close enough to be paired to the handset, and then it’s as easy as selecting a single on-screen button to connect.

Once that’s done, any other supported Samsung device that’s linked to the owner’s account will also automatically connect to the Galaxy Buds+ when prompted. Just like AirPods with other Apple devices owned by the individual. To make this work Samsung device owners will need to make sure that a separate app (Samsung’s SmartThings app) is on the most up-to-date version, and the Samsung device needs to be running Android 7.1.1 or newer to support the Galaxy Buds+ easy pairing option.

For those who rely on their wireless headphones for phone calls and video conferencing, Galaxy Buds+ are fitted with three mics—one inner and two outer—for crystal clear voice capture. The exterior microphones use beamforming to hone in on your voice and tune out background noise so that you can always be heard, no matter where you are.

The Galaxy Buds+ will also allow owners to amplify background noise when they need to, or dial it back with improved Ambient Sound features.

All-new customizable touch capabilities on Galaxy Buds+ allow users to stay in control even without their smartphone in-hand. A single tap can play or pause music; a double tap can skip to the next track or answer a phone call; and the touch & hold command can be customized to whatever other action users need the most.

For Spotify listeners, with Galaxy Buds+, you can continue listening to your favorite music instantly with a single press. Through a simple ‘Tap & Hold’ gesture, Spotify plays recommended music, curating based on your preferences.

The Galaxy Buds+ are priced at $149, and will be available in Black, Blue, and White color options.

What do you think? Will Samsung’s new Galaxy Buds+ be the right truly wireless headphones to take on Apple’s AirPods?