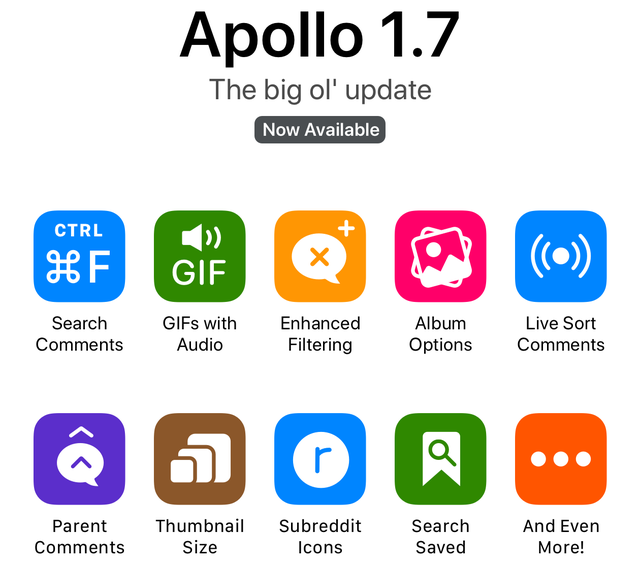 The award-winning Reddit app Apollo was updated on App Store today with a ton of user-requested enhancements and feature additions, bringing the software to new heights. By the way, Apollo was announced publicly almost exactly five years to the date at the end of January.

Christian Selig, who wrote Apollo, says the sheer number of enhancements made him contemplate calling this the Apollo 2.0 update, but he eventually decided bumping version number up to 1.7 was enough despite the update bringing “a ton of awesome stuff”.

Things like being able to search through comments just like how you would with command/control-F on desktop Reddit or being able to search through all your saved items (which you can’t even do on desktop Reddit) are so unbelievably nice to have. I don’t think any other mobile Reddit client has these on any platform. And these are only two of a handful of awesome features.

The gorgeously designed Reddit client was built for power and speed, with the most recent updated including the following new capabilities, enhancements and fixes:

Christian has “some juicy stuff planned” for 1.8 already, noting in the update’s changelog that 2020 is going to be “a crazy year for Apollo” with many “awesome things planned”.

Apollo for Reddit is a free download from App Store with in-app purchases available to unlock all of the app’s advanced features and capabilities.