Much of the jailbreak community’s attention has shifted toward the new checkra1n jailbreak in recent months given just how powerful of an exploit it takes advantage of. The jailbreak is still in its public beta stages today, and its software loader only installs the Cydia package manager out of the box. But could that soon change?

An announcement shared by the official GetSileo Twitter page Monday afternoon reveals that Sileo for iOS 13 will officially ship two more days from now. What’s more is the release will commemorate the one-year anniversary of the day the first beta of the Sileo package manager project became available for testing: 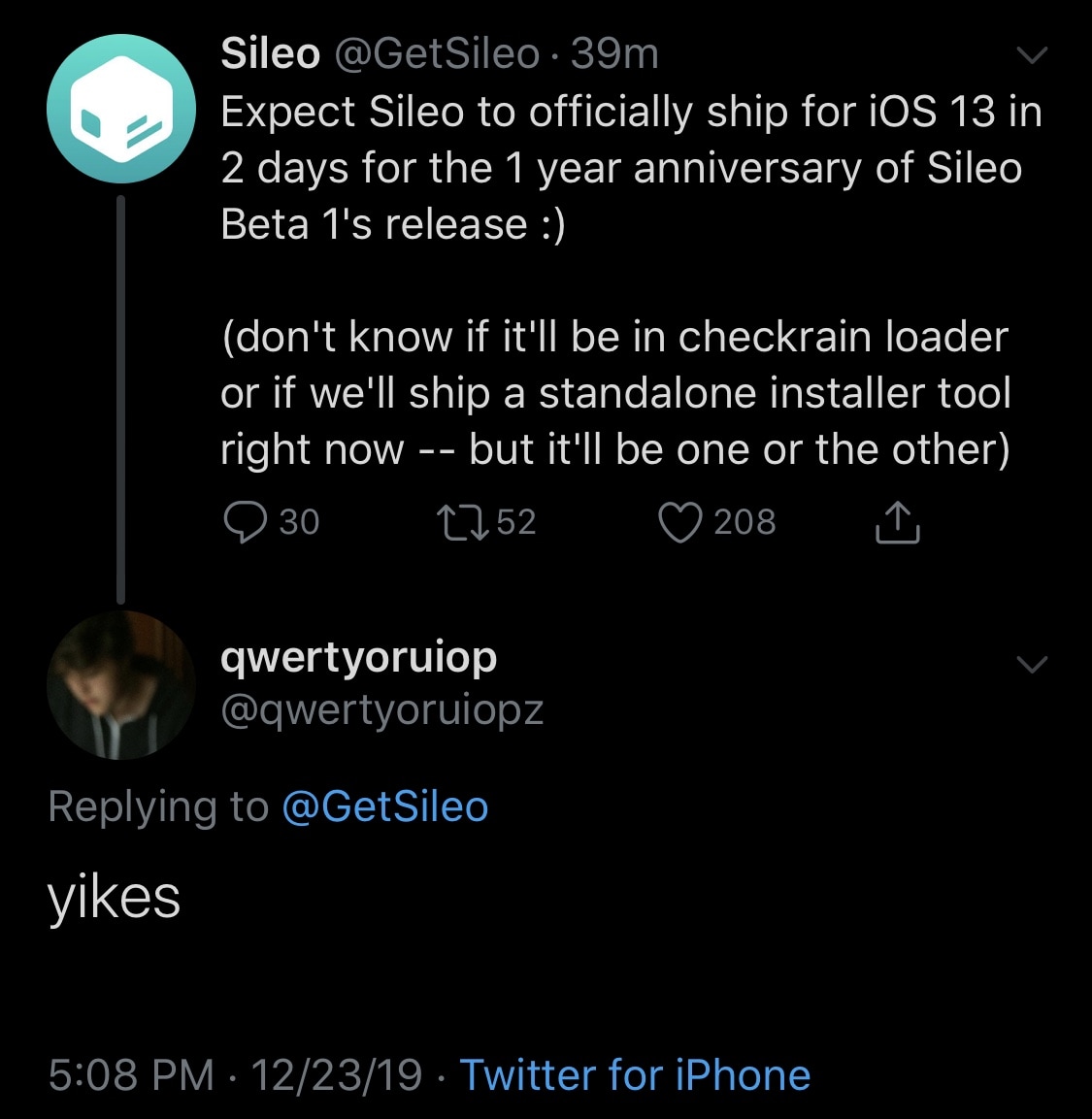 Checkra1n is the only iOS 13-compatible public jailbreak at this time, and with that in mind, the Tweet obviously targets checkra1n users specifically. In a somewhat back-handed decision that left even checkra1n lead developer Luca Todesco baffled, however, CoolStar added that Sileo may or may not be made available in the default checkra1n loader app as Cydia currently is. Todesco retorted with no more than a ‘yikes.’

Instead, CoolStar goes on to explain that Sileo could be made available via a dedicated installer that would be made available through a jailbreak-accessible repository. This definitely wouldn’t be as integrated into the checkra1n jailbreak experience as I would like to see, but it would be a workable solution for the masses who want to use something other than Cydia for their iOS 13 package manager needs.

Notably, Sileo’s infrastructure is built with Apple’s Swift programming language and supports native dark mode – two considerable distinctions that set it apart from Cydia. Despite these attractive advantages, Sileo is also infamous for its fair share of unfortunate occurrences, many of which contributed to increased demand for competing platforms like Zebra, which the checkra1n team plans to offer in the checkra1n loader app in time.

If the Sileo Team advances with a public iOS 13 release as planned, this will make checkra1n the first official public jailbreak besides first-party solutions by the Electra Team like Chimera and Electra to support the non-Cydia package manager. Sileo was never officially released for unc0ver for awkwardly apparent reasons, including but not limited to the perpetual rivalry between CoolStar and Pwn20wnd.

It should be interesting to see how the Sileo Team rolls out its official iOS 13 support for Sileo. Personally, the methodology behind this launch would make or break my interest. I’d like to see a more unified approach to integration with this groundbreaking jailbreak as opposed to a repeat of the separation and control we’ve witnessed with Sileo on other jailbreaks in the past couple of years.

I’ll grab my bag of popcorn… What will you do if Sileo launches for checkra1n? Share in the comments!