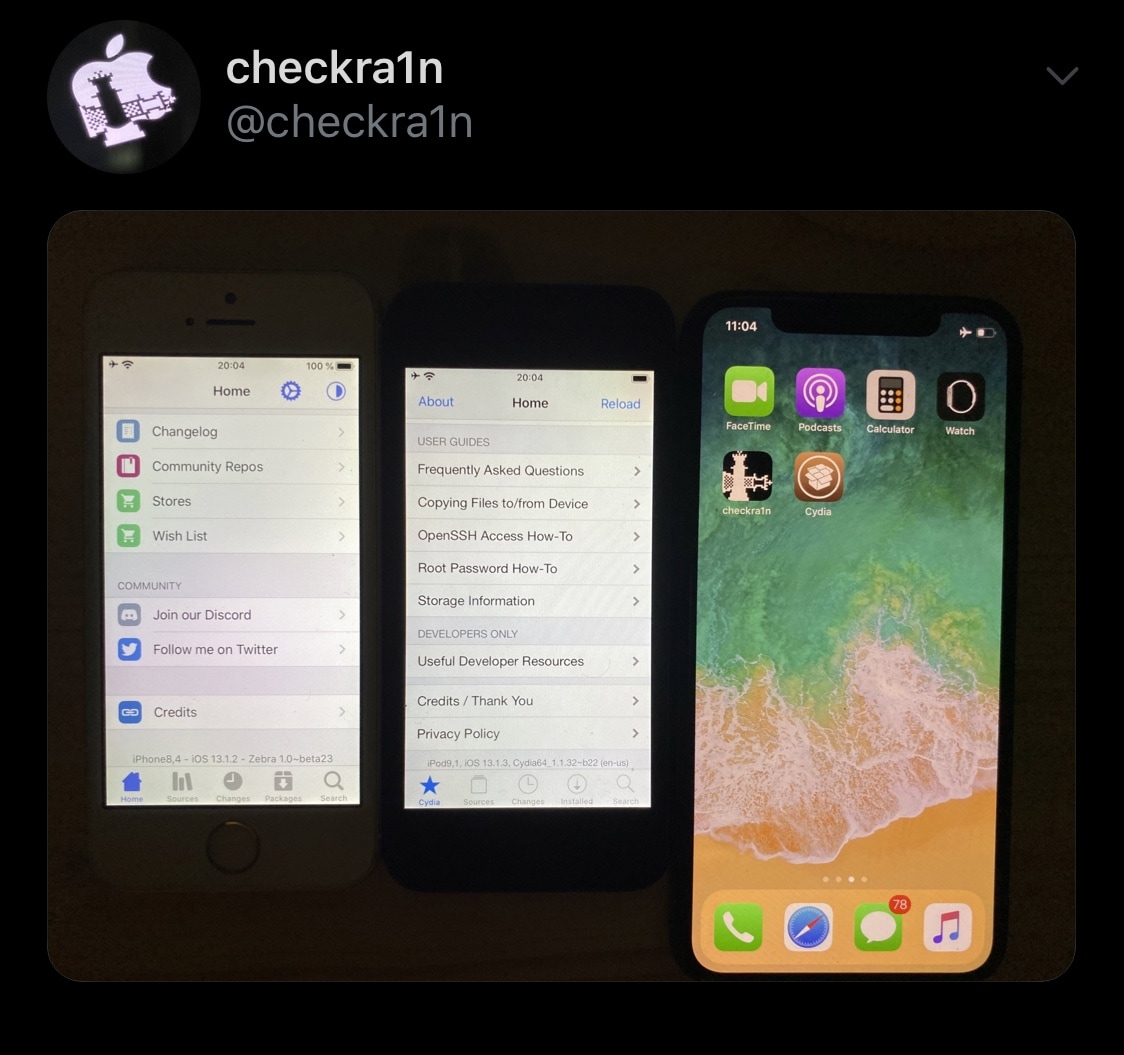 With a resource as powerful as @axi0mX’s checkm8 bootrom exploit floating around in the wild, it’s should come as no surprise to anyone that prominent members of the jailbreak community are actively working on tools that take advantage of it. One of the most significant of those is checkra1n, a project that is currently being spearheaded by renowned hacker and Yalu jailbreak lead developer Luca Todesco.

It’s been a little over a week since we last heard anything new about checkra1n, but based on what we saw at the time, it would seem things are falling into place quite nicely. Now, a new Tweet shared Sunday afternoon by the official checkra1n Twitter page reveals what appears to be working package managers installed on an iPhone X, iPhone SE, and a seventh-generation iPod touch.

From left to right, the image depicts an iPhone SE with iOS 13.1.2 running the Zebra package manager, an iPod touch (seventh generation) with iOS 13.1.3 running Cydia, and an iPhone X running an unknown version of iOS with the Cydia app on its Home screen.

Most of the jailbreak community will recognize Cydia because it has long enjoyed being the king of the hill when it comes to package managers in general. Zebra is an alternative to Cydia, but it may not be as familiar to some jailbreakers as Cydia. Notably, none of the devices are running CoolStar’s Sileo package manager, which has remained exclusive to the Chimera and Electra jailbreak solutions.

In this situation, the iOS version is irrelevant because a bootrom exploit like checkm8 can’t be patched with a software update from Apple. This precedent-setting exploit affects all A5-A11 devices, up to and including the iconic iPhone X. Moreover, those handsets are effectively jailbreakable for life as long as a jailbreak developer is willing to maintain his or her tool for as long as the device in question supports software updates.

While these teasers irrefutably indicate that progress is being made on an official checkm8-supported jailbreak tool, they don’t advise any sort of ETA for release. With that in mind, we’ll all just have to stay tuned for more.

Are you excited for the checkra1n jailbreak tool? Tell us why or why not in the comments section.