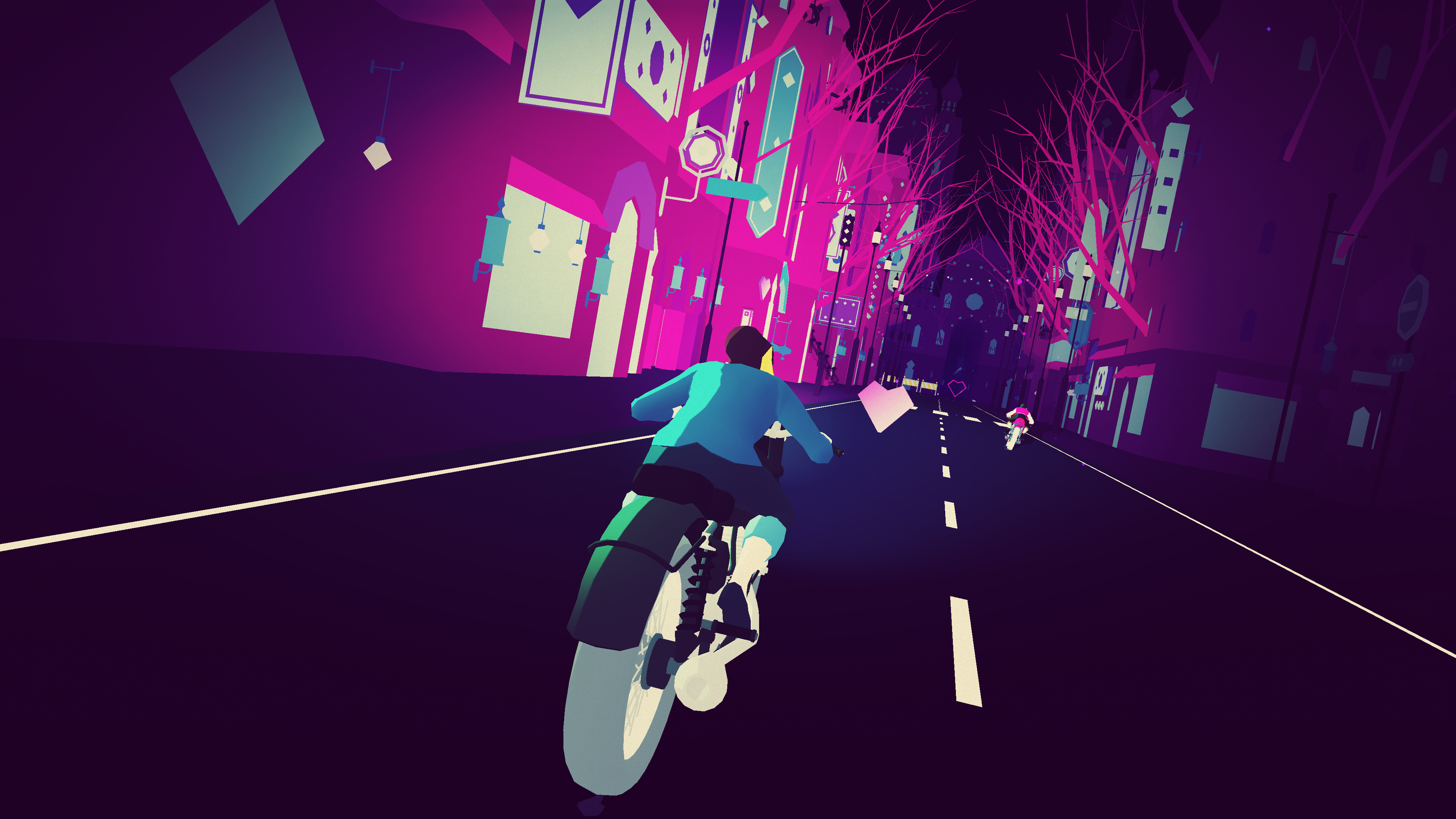 When Apple launched Apple Arcade earlier this year, it had a few interesting and unique titles to captivate players. One of the launch games was Sayonara Wild Hearts, a game that caught my eye from the first time I saw it. However, I never really got the chance to play it. That is, until today’s Arcade review, the best excuse to play the games you want.

Sayonara Wild Hearts – The Fast and the Fabulous

Sayonara Wild Hearts is an arcade game from Simogo. You play as a woman whose heart has been broken, as that happens, the balance of the universe is disturbed, and the divine Arcana who watched over said universe created a heroine out the shards of your broken heart. Now, it’s your job to restore the balance in the universe through the power of fast vehicles.

The story of this game feels like something that came out of an anime, and it fits the overall style of the game properly. You begin your adventure as soon as a diamond butterfly enters your room and takes you and your skateboard to a highway to the sky. As soon as you fall on the highway, the game starts. 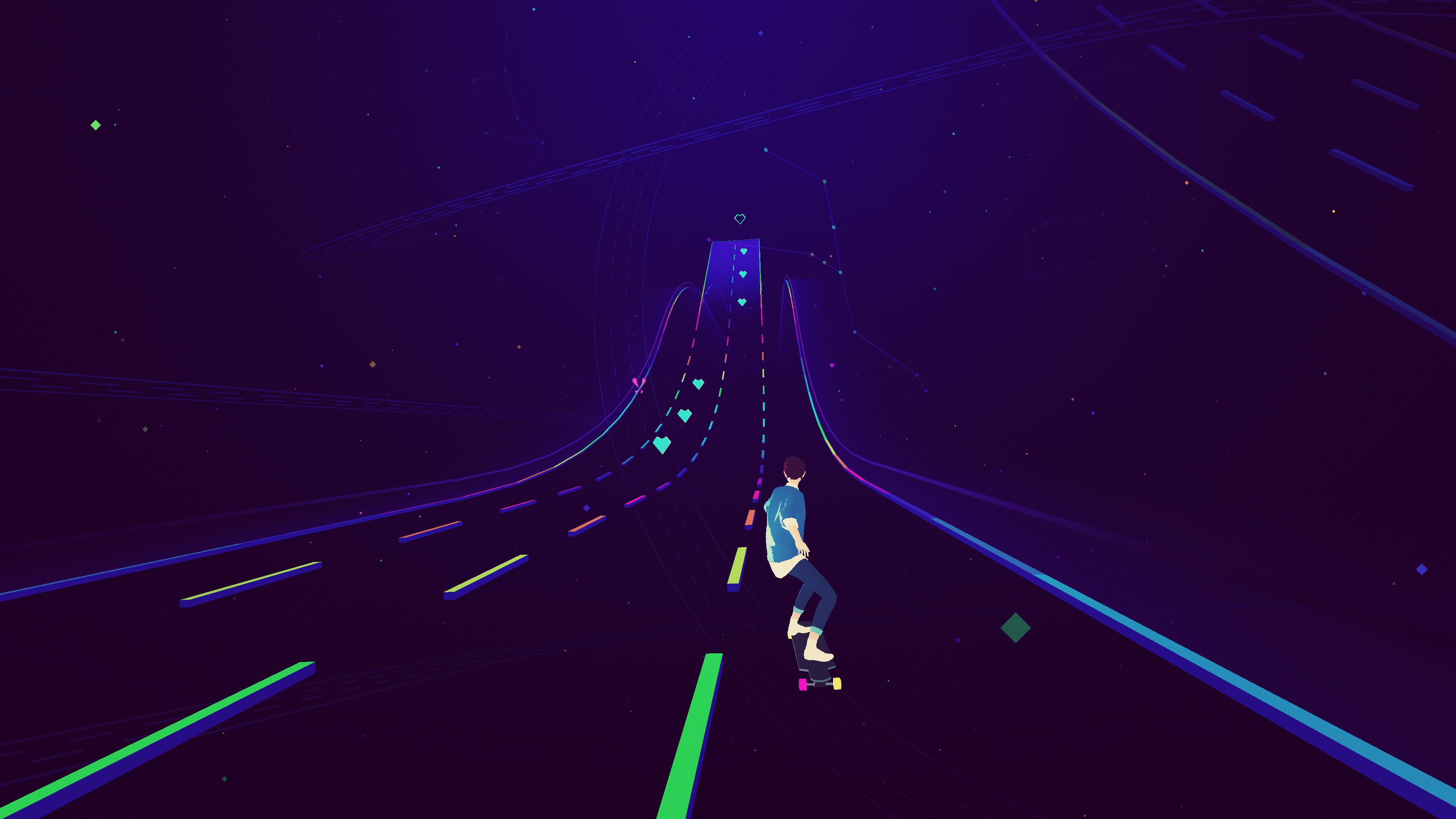 You’ll go through several levels, or songs, as the game calls them. The main goal in each level is to get as many shards and hearts as possible to earn more points. The rank you’ll achieve at the level will depend on the number of points you get.

What’s great about the Sayonara is that you won’t be only driving around catching hearts all the time. You’ll also battle. Every now and then, you’ll have to face some enemies that look as fabulous as you. You’ll get to fight them by pressing the screen or the buttons at the right time. You’ll also have to chase them around, avoiding obstacles and enemies’ attacks until you catch them and destroy them. The fights are fast-paced and easy, although they look more like choreography than an actual fight.

The overall experience in Sayonara Wild Hearts is truly impressive. The world is really immersive and the colors are vibrant and seem like they came out of a neon party, or whatever you kids are calling it these days. However, there’s a lot of turning around, going up and down and jumping around, so if you’re a person that gets dizzy easily or has vestibular issues, consider yourself warned – it’s a lot to take in.

The controls are extremely simple. Most of the time you’ll be sliding your finger on the screen, with the occasional tapping when you’re fighting an enemy. Simogo did a great job of keeping the game interesting despite its simple controls. The environment changes constantly and the way you need to move is not always the same. That said, it’s extremely difficult getting a gold rank on your first try. Sometimes the game moves really fast so you don’t get a chance to react. Worst case scenario, you miss the shards and have to start over to get more points, or you die. However, checkpoints are really forgiving so you don’t have to repeat much from where you die.

The best part is that you don’t really get bored of replaying a level. As mentioned before, each level is called a song, that’s because each level has a different song, and each song is great. These songs are as colorful as the game and they’re what really takes you inside the game and makes you feel like you’re the one riding the floating card. If you don’t want to play levels to enjoy these great songs, you can also get them in most places you stream music.

Overall, Sayonara Wild Hearts is a fabulous game that takes you back to the Arcade era while showing you a futuristic era that you’ll want to live in. Everything, from the amazing soundtrack to the easy yet refreshing gameplay will keep you hooked to this game until you finish it. Definitely worth checking out.