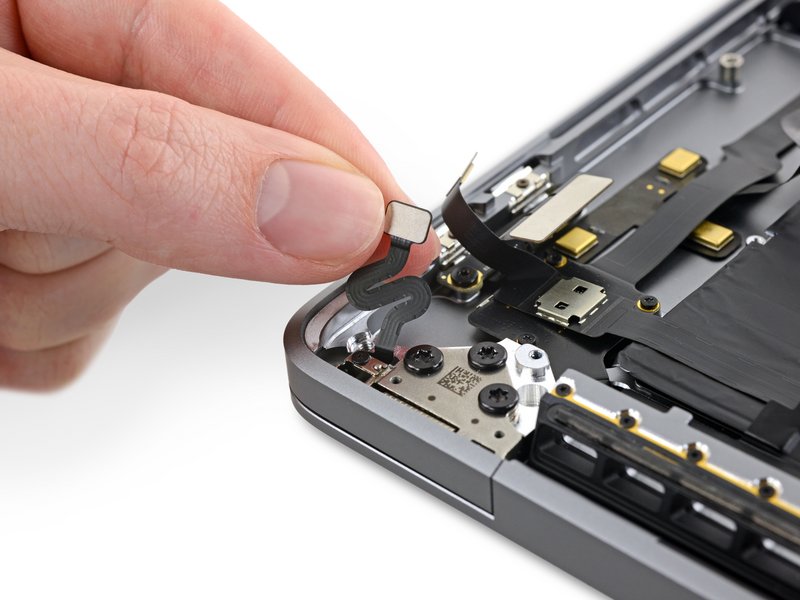 More often than not, a company will uncover all of the new and noteworthy features in a new product on its own, with subsequent investigations of the new hardware or software confirming those details. But it looks like the brand new 16-inch MacBook Pro has a small surprise for us.

If you’ll recall, the fine folks over at iFixit recently gave the new 16-inch MacBook Pro the full teardown treatment. That revealed the larger battery, gave us details about the new Magic Keyboard with its scissor design, and a look at the new thermal design for good measure. But now a new sensor has been discovered. You can see it pictured above.

MacRumors recently got a look at an internal document originally sent to Authorized Service Providers, which makes note of a “lid angle sensor” as part of the pieces that make up the full 16-inch MacBook Pro. According to the report, the new sensor presumably monitors the open and/or closed state of the new MacBook Pro.

iFixit updated its teardown to include images of the sensor, and you can see it at the top of this article. The sensor is placed near the left-side hinge of the 16-inch MacBook Pro, which features a magnet embedded in the hinge itself.

While previous-generation MacBook Pro models have a Hall effect sensor that determines when the lid is closed for sleep/wake purposes, the lid angle sensor in the 16-inch MacBook Pro appears to be more sophisticated.

Apple’s service document does not provide any clues as to why the sensor was redesigned, but iFixit speculates that it could provide a clever way for Apple to track how often the lid was opened, closed, or adjusted in cases where the display or frayed flex cables need to be repaired — think “Flexgate.”

It’s also possible that this new sensor could be tied to a new feature that could be built into macOS at some point in the future, but there’s definitely no indication of that being the case right now.

And for an Authorized Service Provider to complete the repair process itself, both the display and the new lid angle sensor must be calibrated.

So, a secret sensor! That’s exciting! Well, if it actually turns into something at some point down the road. Then again, it could be absolutely nothing.

Let us know what you think this new lid angle sensor could be tied to down in the comments below.