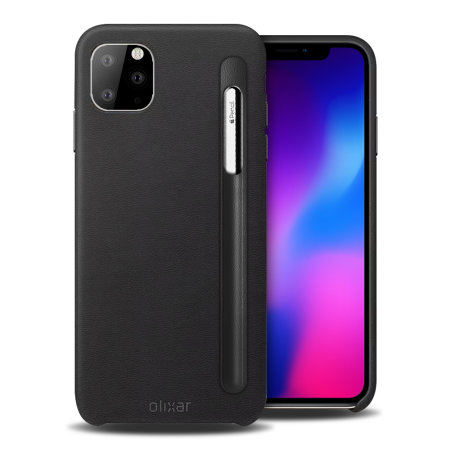 In late July, a rumor cropped up that Apple is planning on adopting Apple Pencil support for the 2019 iPhone lineup. And at least one case maker has envisioned what that might look like.

At least, as far as the case itself is concerned. Olixar is listing the iPhone 11 Pro casing already, despite the fact that the phone itself is not official just yet. The landing page for the new case is already live, and you can pre-order the case for £20 from MobileFun in the United Kingdom.

As you can see from the image above, there is a dedicated slot within the back of the case for an Apple Pencil. This is billed as an “added convenience”, which it may be if the iPhone 11 series actually does support the Apple Pencil. This would be a slightly smaller Apple Pencil, though, so apparently Apple would be making a brand new accessory just for the iPhone.

Here’s the description of the new case:

Crafted from premium genuine leather, this exquisite black case from Olixar for the iPhone 11 Pro provides stunning style and prestigious protection for your phone in a slim and sleek package, with the added convenience of an Apple Pencil sleeve.

Earlier this year it was rumored that Apple is planning on bringing support for the Apple Pencil to the 2019 iPhone lineup. However, this is a rumor that hasn’t gained much traction since that first report cropped up. Not that that’s an indicator that Apple Pencil support isn’t coming to the iPhone, but it still feels like this could go either way at this point.

But, what do you think? Do you want Apple Pencil support for the iPhone?