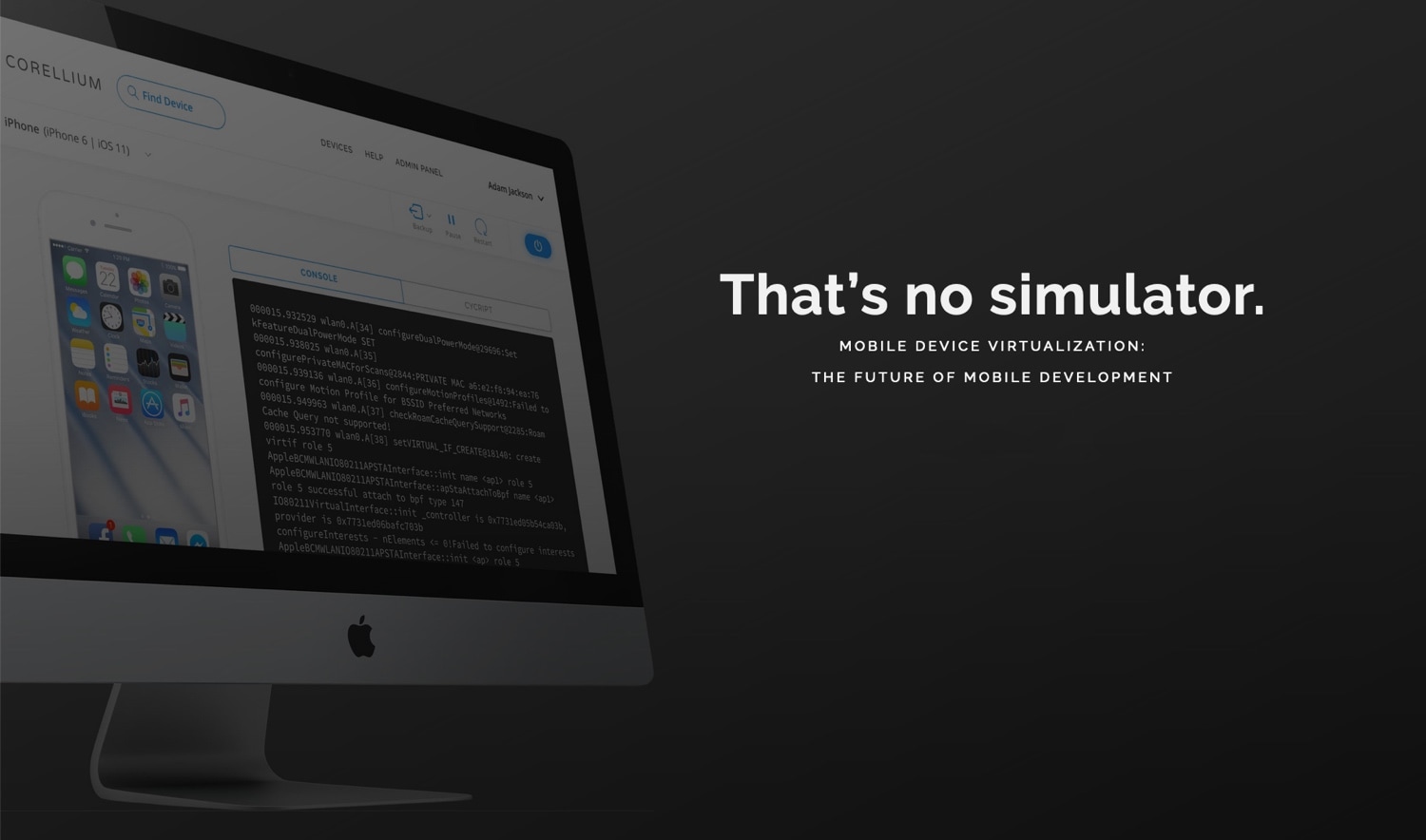 Apple’s legal team filed a lawsuit against mobile device virtualization company Corellium LLC this week for purported “copyright infringement,” citing that Corellium’s business model “is based entirely on commercializing the illegal replication of the copyrighted operating system and applications that run on Apple’s iPhone, iPad, and other Apple devices.”

Corellium’s services are a valuable asset to security researchers because they enable deployment of Apple’s mobile operating system in a virtualized environment. With such a tool, hackers can research iOS vulnerabilities, and in the case of unc0ver lead developer Pwn20wnd, it can even help with jailbreak tool development by ensuring stability across all device and firmware combinations.

According to Siguza, a respected security researcher with ties to the jailbreak community, Apple’s case comes off as hostile and appears to be somewhat unorganized: 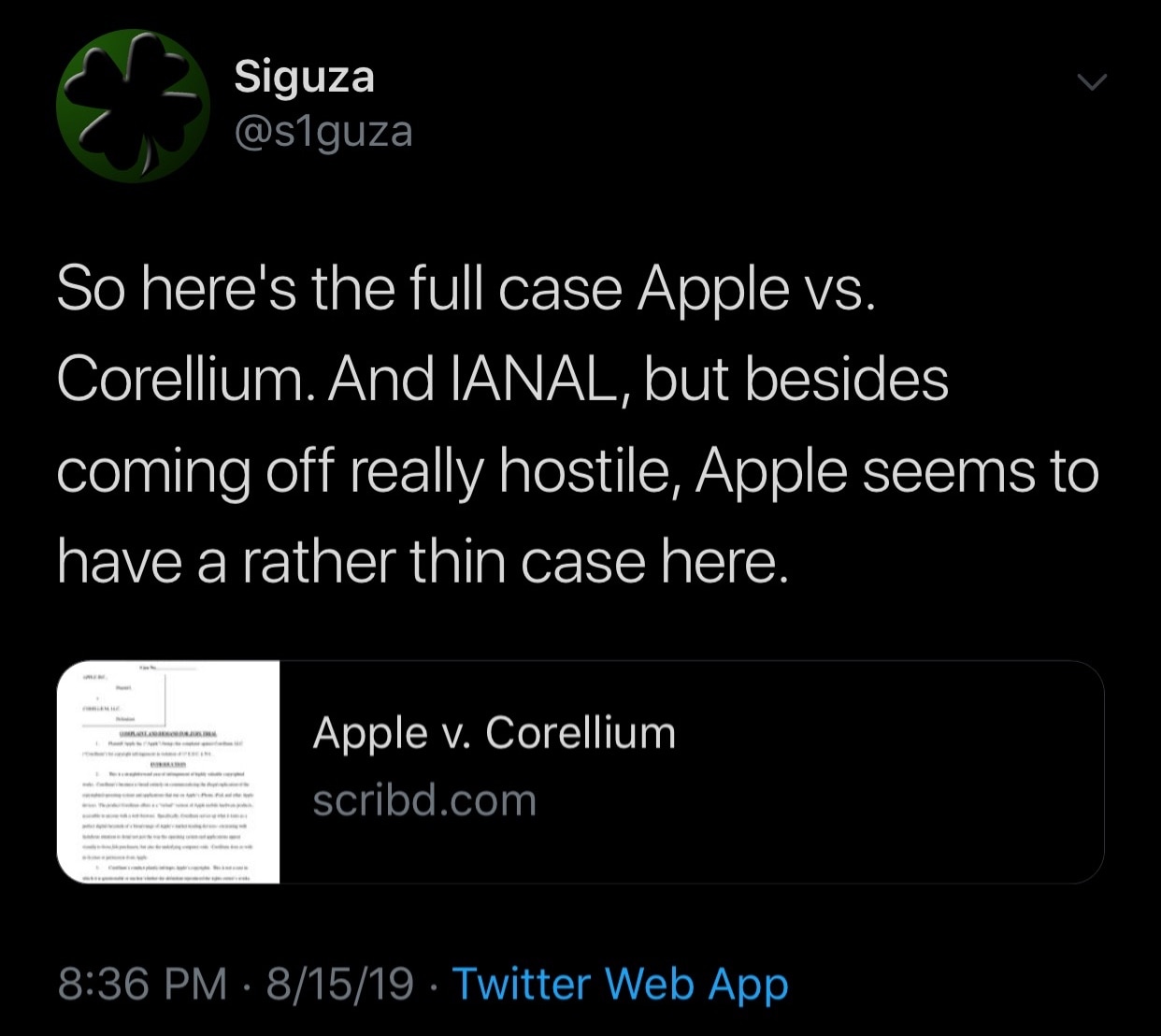 In several instances, Apple refers to unc0ver as an exploit rather than a jailbreak, perhaps to intentionally demonize the service as it becomes a direct competitor to Apple’s upcoming plans to provide security researchers with research handsets under the company’s security research device program.

Perhaps unsurprisingly, several renowned members of the jailbreak community have spoken out against Apple in this disturbing attack on Corellium, including Will Strafach, a former member of the Chronic Dev Team: 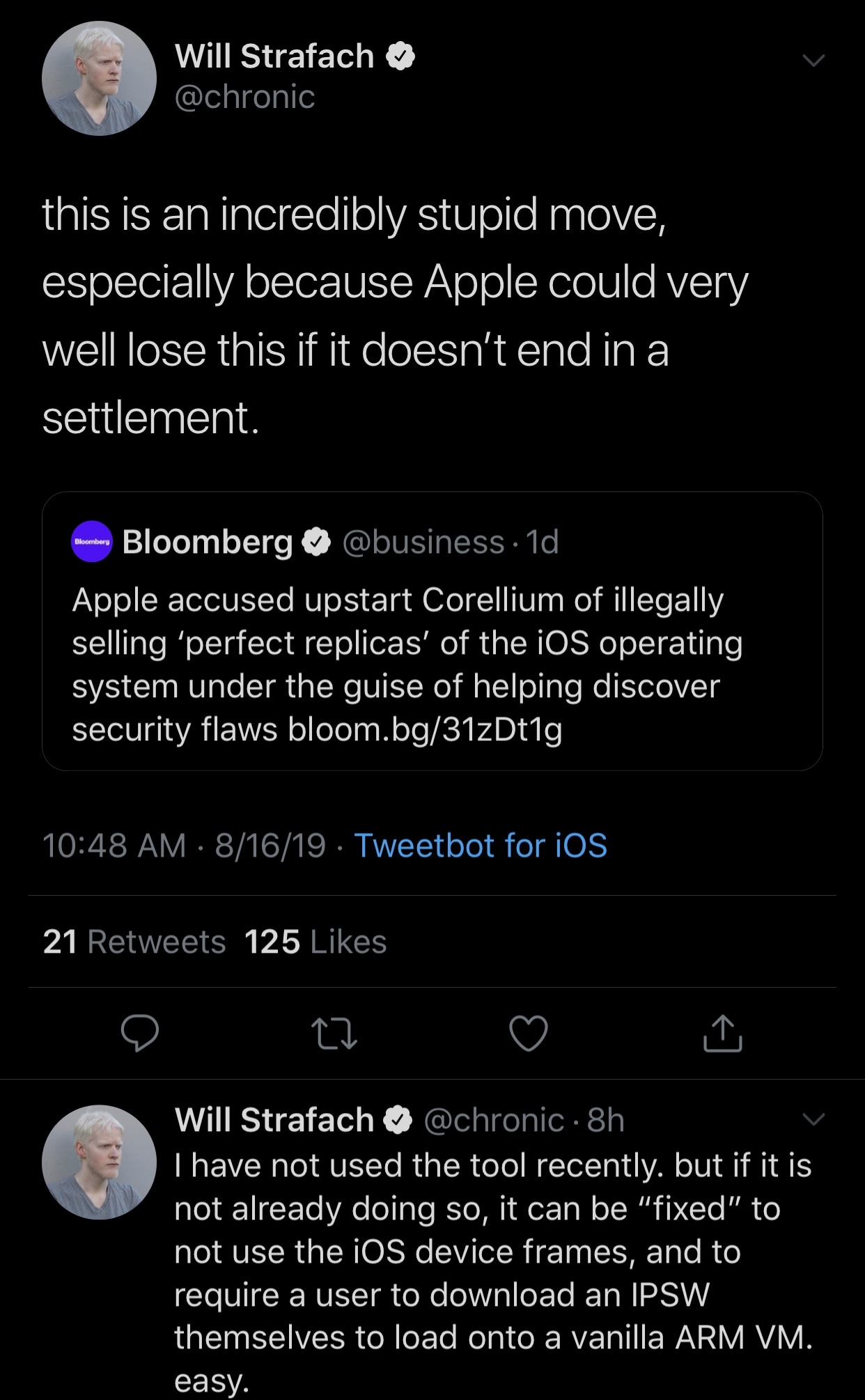 According to Strafach, Corellium could ‘fix’ their platform to avert litigation by removing Apple-centric device frames and necessitating users to download and load .IPSW files for virtualization purposes rather than handling everything behind the scenes in and of itself. 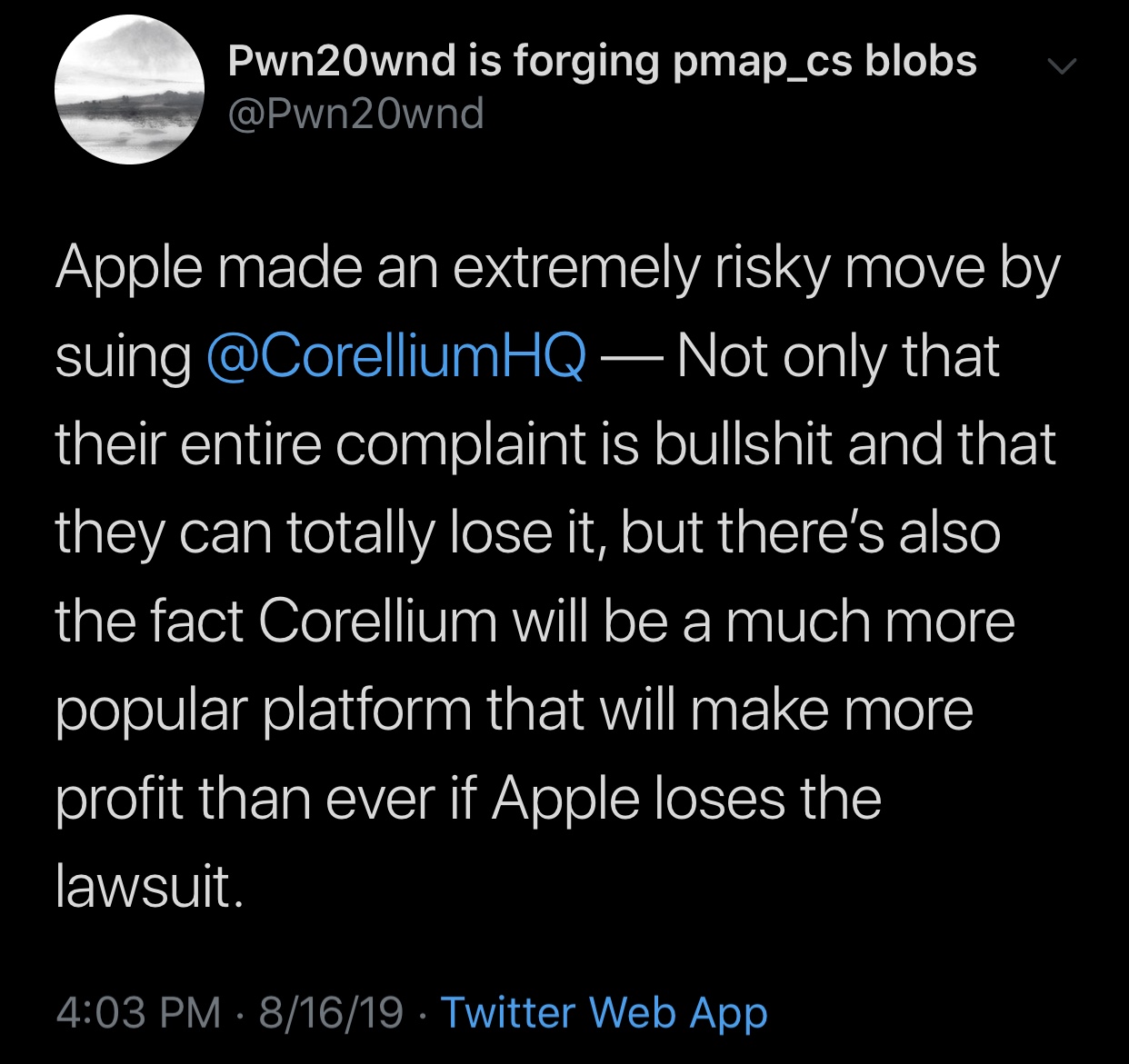 Even former Evaders team member pod2g chimed in on the matter: 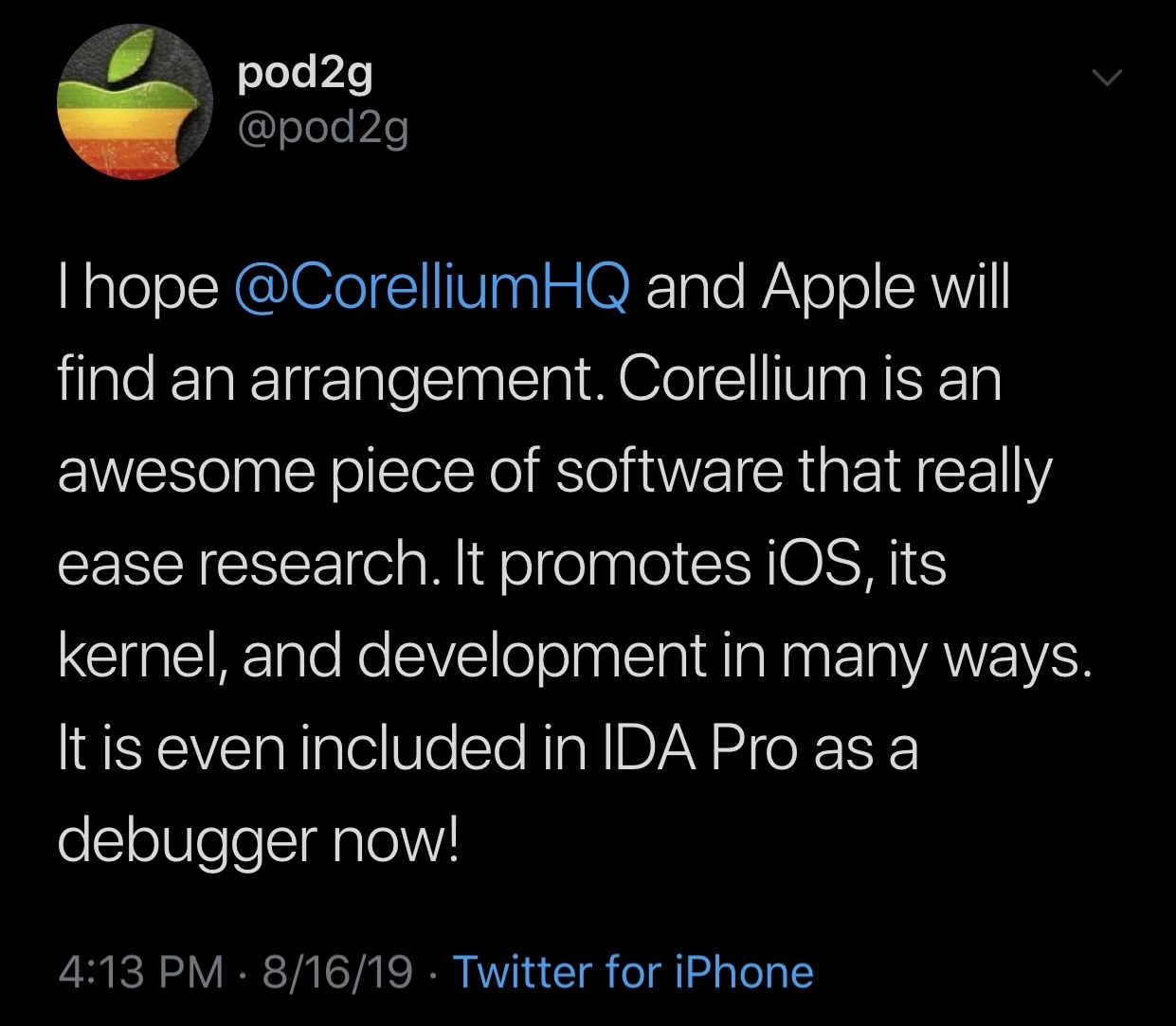 Many others have also spoken out against Apple in their endgame plan of laying waste to Corellium’s iOS virtualization services, and many other voices will surely follow. A relevant thread created on /r/jailbreak regarding the matter gained tons of traction on Friday as it accumulated hundreds of upvotes in just a matter of hours.

The case could go either way, and many high-profile security researchers believe that there’s a strong possibility Apple could lose.

It should be interesting to see how this goes, and more importantly, how it might impact security research on the iOS platform in the foreseeable future.

Are you concerned about how this case might hinder security research on the iOS platform going forward? Discuss in the comments section below.