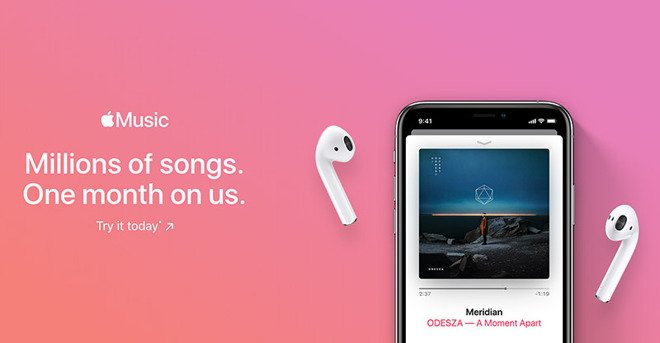 It would seem that Apple Music is changing its free trial from a rather generous three months down to just thirty days, in line with the likes of Spotify and Pandora.

This could potentially be a mistake or a new change that Apple is rolling out. Clicking on the banner still brings up a prompt for a three month free trial in iTunes and there are no mentions of a one-month trial instead of a three-month trial on Apple’s dedicated site for Apple Music.

The updated terms, if true, would mark the first change to Apple’s streaming music subscription structure since the service launched in 2015. The three-month trial has been offered to new customers since Apple Music’s inception. It’s entirely possible Apple wants to reduce the duration of the free trial because it’s required to pay royalties to record labels on all songs played during the trial period.

Although Spotify still leads the music-streaming race globally because it had entered the market years before Apple, the Mac maker’s service has been picking up considerable steam since its 2015 introduction. Currently, Apple Music has 60 million paying subscribers while Spotify has a hundred mullion customers who pay a subscription fee.

However, Apple Music has overtaken Spotify in the United States.

It’s believed to have been growing, both domestically and internationally, more rapidly than the Swedish company’s offering. According to a new profile of Apple Music’s Vice President Oliver Schusser from Billboard, he has “stoked a renewed energy” and reunited the service’s team following the departure of former Beats head and founder Jimmy Iovine.

Aside from other tidbits, the write-up alleges that Apple Music’s momentum has slowed somewhat recently and that Jimmy Iovine spent what some in the music division considered an “excessive amount of money” on Apple Music exclusives, music videos and documentaries.