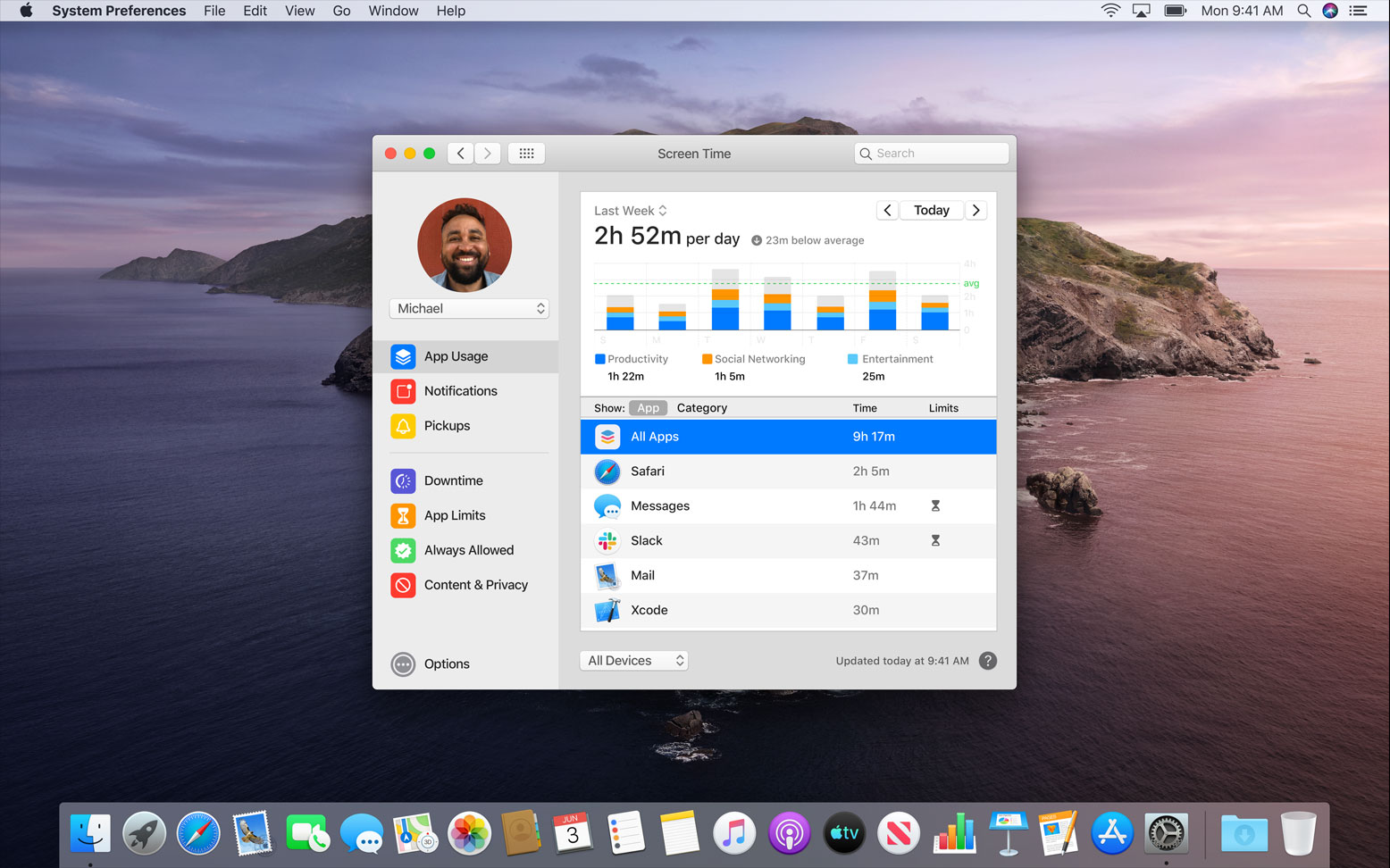 Screen Time was introduced in iOS not too long ago, and the app, while it has its limitations, is a solid foundation for a tool that allows users to control app and device usage on their iOS devices. For parents, it’s an easy, built-in way to help monitor and control their child’s usage, too. And now Screen Time is coming to Mac.

Apple officially announced Screen Time for macOS Catalina at this year’s WWDC keynote. The company confirmed that the features iOS users know will make the jump to macOS later this year, while Apple also makes some changes along the way.

So here’s a quick overview of what to expect from Screen Time when macOS Catalina launches later this year.

One of the key ingredients of Screen Time is usage reports. The software will automatically build individual reports to show the user just how much time they spent on their device, which apps they are using the most, and even a number of notifications received. iCloud keeps track of all of this, across your different devices — which will now include iOS- and macOS Catalina-equipped hardware.

On the other side of the same coin is Downtime. This feature within Screen Time will let users choose for themselves (or their children) just which apps can be used at a set period of time. It’s a quick and easy way to block access to an app that might be grabbing too much attention at inopportune times.

Being able to set a specific limit for an app, or even a group of apps, is critical to Screen Time. This lets the user control when an app is accessible, and, if necessary, to block an app from usage altogether. Users can set an amount of time to use an app or even a website. And this particular feature will let the user set time limits for not only specific apps, but also categories, and total time.

That last bit falls in line with combined limits, which will let the user choose categories or specific apps to block for a duration of time. Want social media apps blocked after a certain hour? This will help the user do that. Websites can also be blocked with this feature, too.

But what if you just need one more minute in an app that’s supposed to be inaccessible? Screen Time will allow it. With one more minute, there will be a pop-up when a time limit has been reached if you’re using that app. You can tap the notification to get an additional 60 seconds with the app.

Won’t Someone Think Of The Children?

Screen Time is especially useful for parents with children who just want a bit more time with their favorite device(s). As such, Apple has added kid-focused features into Screen Time. For instance, an extension of the built-in limits. With communication limits in place, a parent can easily choose who their kids can communicate with, and who can communicate with their kids, throughout the day. This works with Downtime as well, blocking some individuals during this stretch.

Finally, Family Sharing. Not a new feature by any means, but worth a callout. With this, parents can easily set up all of these rules that will apply to iPhone, iPad, and Mac, all thanks to syncing with iCloud.

Screen Time is a powerful tool in its own right, and it serves as a solid base to build upon. For adults, Screen Time can feel sort of lifeless, though, as there are still steps to take to avoid all of the software roadblocks to restrict app/device usage. But that’s just the nature of it — we can’t be locked out of our devices completely, after all.

But for parents, Screen Time is the sort of feature that should have launched years ago. Now that it’s available, and finally arriving on Mac, one can only hope that Apple continues to build out from here and add even more helpful features along the way.

Do you use Screen Time on a regular basis, whether it’s for yourself or your kids? Are you looking forward to its macOS Catalina debut?