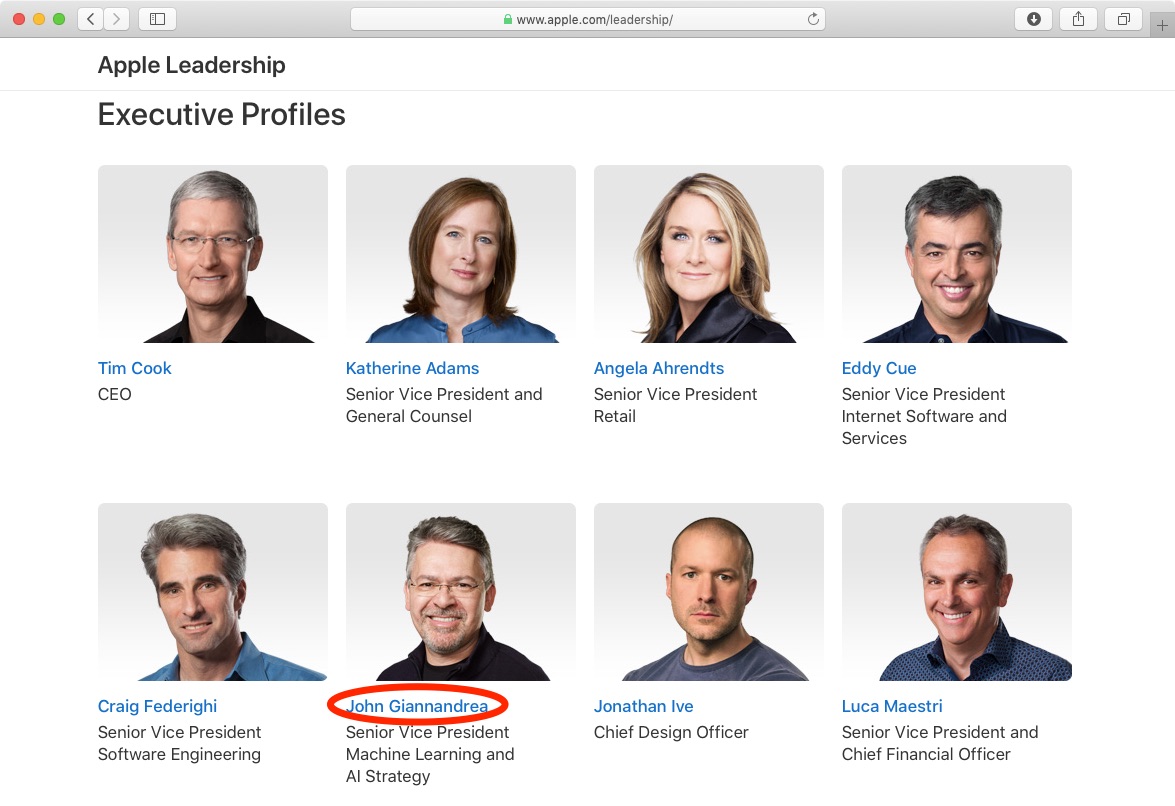 Giannandrea is now listed in his official SVP capacity on Apple’s Leadership page.

John hit the ground running at Apple and we are thrilled to have him as part of our executive team. Machine learning and artificial intelligence are important to Apple’s future as they are fundamentally changing the way people interact with technology, and already helping our customers live better lives. We’re fortunate to have John, a leader in the AI industry, driving our efforts in this critical area.

According to the Cupertino technology giant, its new AI and ML chief is also helping it enhance the developer experience with tools including Core ML and Create ML, making it easier and faster to integrate machine learning into third-party apps.

John Giannandrea is Apple’s Senior Vice President of Machine Learning and AI Strategy, reporting to CEO Tim Cook. John joined Apple in 2018 and oversees the strategy for artificial intelligence and machine learning across the company and development of Core ML and Siri technologies.

Prior to Apple, John spent 8 years at Google where he led the Machine Intelligence, Research, and Search teams. Before this he co-founded two technology companies, Tellme Networks and Metaweb Technologies. Earlier in his career John was a Senior Engineer at General Magic.

John graduated from the University of Strathclyde in Glasgow, Scotland where he earned a Bachelor of Science with Honors in Computer Science, and was awarded a Doctorate Honoris Causa. John is on the board of trustees at the SETI Institute and Castilleja School.

Commenting on the hire in an internal memo to employees, CEO Tim Cook wrote at the time that “John shares our commitment to privacy and our thoughtful approach as we make computers even smarter and more personal.”

Giannandrea joined Google in 2010 as part of its Metaweb acquisition. During his time with the Internet giant, Giannandrea had been responsible for integrating artificial intelligence into major products such as Gmail, Google Search and Assistant.

He’s not just expected to fix Siri but also spearhead a new paradigm shift at Apple around advanced AI and ML in a way that doesn’t compromise Apple’s commitment to privacy.