iOS hacker Pwn20wnd has been releasing a steady stream of updates for the unc0ver jailbreak tool since its conception, and it has come to our attention that another update for the tool was released Tuesday afternoon.

Citing a couple of Tweets shared by Pwn20wnd not too long ago, unc0ver V1.0.3 apparently resolves a few issues known to occur on supported beta firmware versions and further improves the RootFS Restore feature: 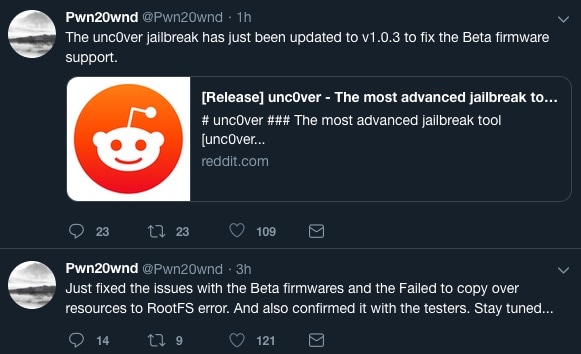 All unc0ver jailbreak users are advised to download the latest version of unc0ver from Pwn20wnd’s official GitHub repository at their earliest convenience. Although the update mostly targets beta firmware users, refinements made in the tool’s code undoubtedly improve stability across the board.

Did unc0ver V1.0.3 resolve any of the problems you were having with your jailbreak? Share your experience in the comments section below.