That massive 6.5-inch OLED panel adorning a 256-gigabyte edition of the new iPhone XS Max amounts to nearly one-fifth of the phone’s total bill of materials, according to estimates by TechInsights in their teardown of the handset.

Still, Apple has managed to save money on the cost of the OLED displays in the new iPhones compared with what it was estimated to had been paying for that 5.8-inch OLED panel in the original iPhone X, according to the TechInsights data shared Wednesday by Reuters.

The story notes that the relatively small increase in OLED panel cost (just $3.23 per unit)—despite the larger screen size—could be explained by the removal of unspecified parts for the 3D Touch feature. “All told, what they took out adds up to about $10, so this $80 OLED estimate would have been about $90,” said TechInsight’s Al Cowsky.

Here are your takeaways:

TechInsights commented on the Xs vs. Max difference from a cost standpoint:

Some of the increases in cost from iPhone Xs to iPhone XS Max are in the areas of baseband, larger OLED display, larger battery, more non-volatile memory and a significant increase in the cost of non-electronic components. iPhone XS Max has larger, heavier housings than iPhone X and the internal frame carries more process costs around spot welds, inserts, etc.

The 256GB iPhone XS Max sells for $1,249 in the United States, but keep in mind that the cost of parts doesn’t take into account other costs associated with research and development, design, packaging, labor, shipping, sales, marketing, advertising and so forth.

Here is a high-level view into the costs of the various components of the Max. 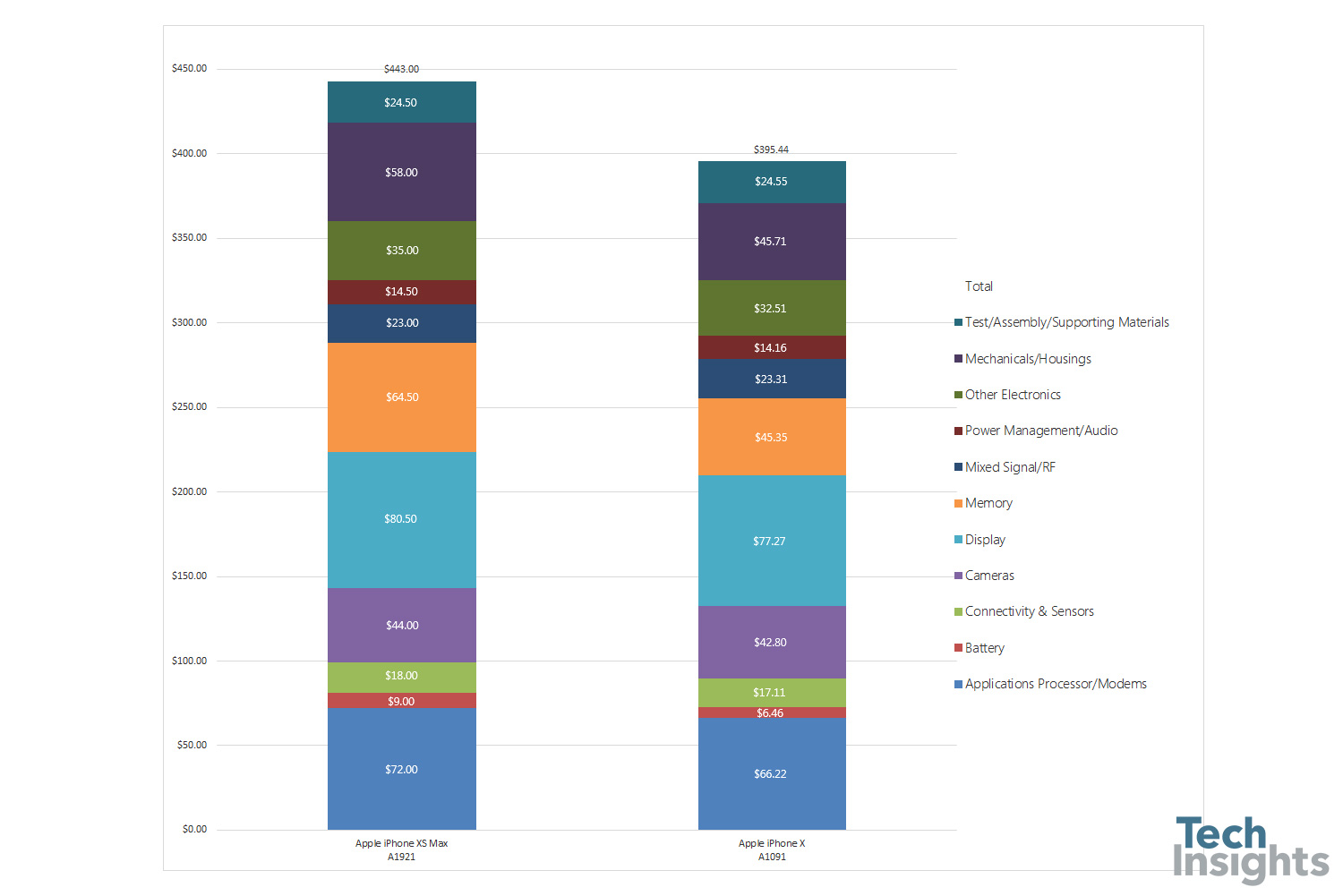 According to Intel, its RF transceiver in the Max can achieve Cat 16 downlink and Cat 15 uplink. The A12 Bionic and the Intel modem cost Apple a total of $72 versus the $66.22 they used to pay for the Intel modem and the A11 Bionic chip in last year’s iPhone X.

The main chip and modems are the second most expensive parts in these new phones.

256GB of flash storage costs Apple $64 and is the third most expensive component. The cameras are priced at $44 and the larger, heavier housing and mechanical components at $55. The most lucrative part in any iPhone has gotta be flash storage, according to a Bloomberg analysis we ran this morning.