Depending on how you use Siri throughout your workflow, you might find a new free jailbreak tweak called AutoDismissSiri by iOS developer Andreas Henriksson to be an advantageous supplement to your jailbroken handset.

Just as the tweak’s name implies, AutoDismissSiri adds a timeout period to the Siri interface. That said, if Siri would idle on your device for a specific amount of time, then the interface closes automatically.

After installing AutoDismissSiri, you’ll find a preference pane in the Settings app where you can configure its parameters: 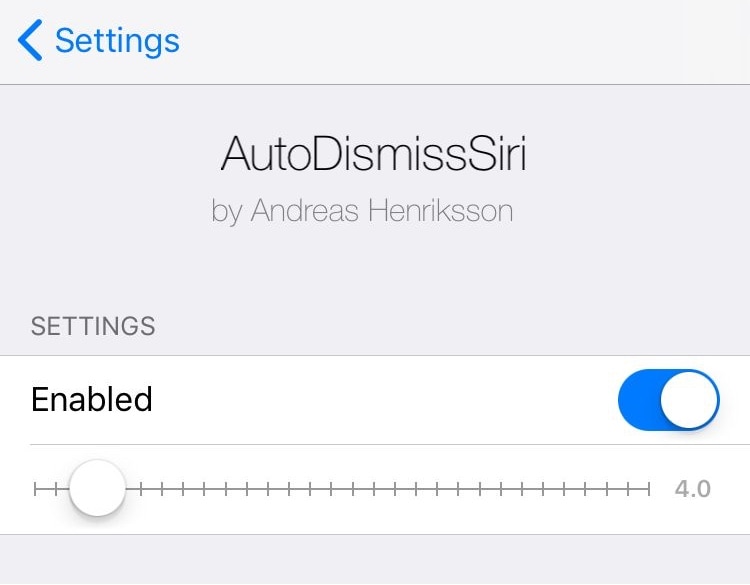 In most cases, you’d close Siri yourself with a press of the Home button or a tap on the screen; but AutoDismissSiri comes in handy when you’re yelling “Hey Siri!” from across the room and don’t have physical access to your handset after your inquiry.

That said, the tweak should be useful for those who use the hands-free Hey Siri functionality, and having been in these shoes before, we appreciate the attention to detail provided by jailbreak tweaks like AutoDismissSiri when they launch in the Cydia Store.

If you’re interested in trying AutoDismissSiri, then you can download it for free from Cydia’s Packix repository. The tweak is advertised to work on all jailbroken handsets running iOS 7-11, and the developer has open-sourced the tweak on GitHub for those interested in learning about how the tweak works.

Do you have a use for AutoDismissSiri? Let us know in the comments section below.