The Spoke – Search Socially app makes it easier to find TV shows and movies that match your interests. Better still, the app shows you where you can watch that content in just a few steps. It also offers reviews and information on local restaurants and similar establishments. Not surprisingly, The Spoke app also includes a social component that lets you share your likes and dislikes with others. Here’s a brief look at The Spoke.

When you start The Spoke for the first time, either through the app or online, you’re asked to create a profile. Besides setting up login information like your username and password, you must indicate which activity you like the best: Watch or Eat & Drink. Once you do, The Spoke wants you to rate some initial content (or locations) to personalize the service. The more items you rate, the more the algorithm behind The Spoke will know about you when it determines your so-called Spoke Score.

Regardless of whether you select Watch or Eat & Drink, both sections show up on The Spoke through a pull-down menu at the top of the app. 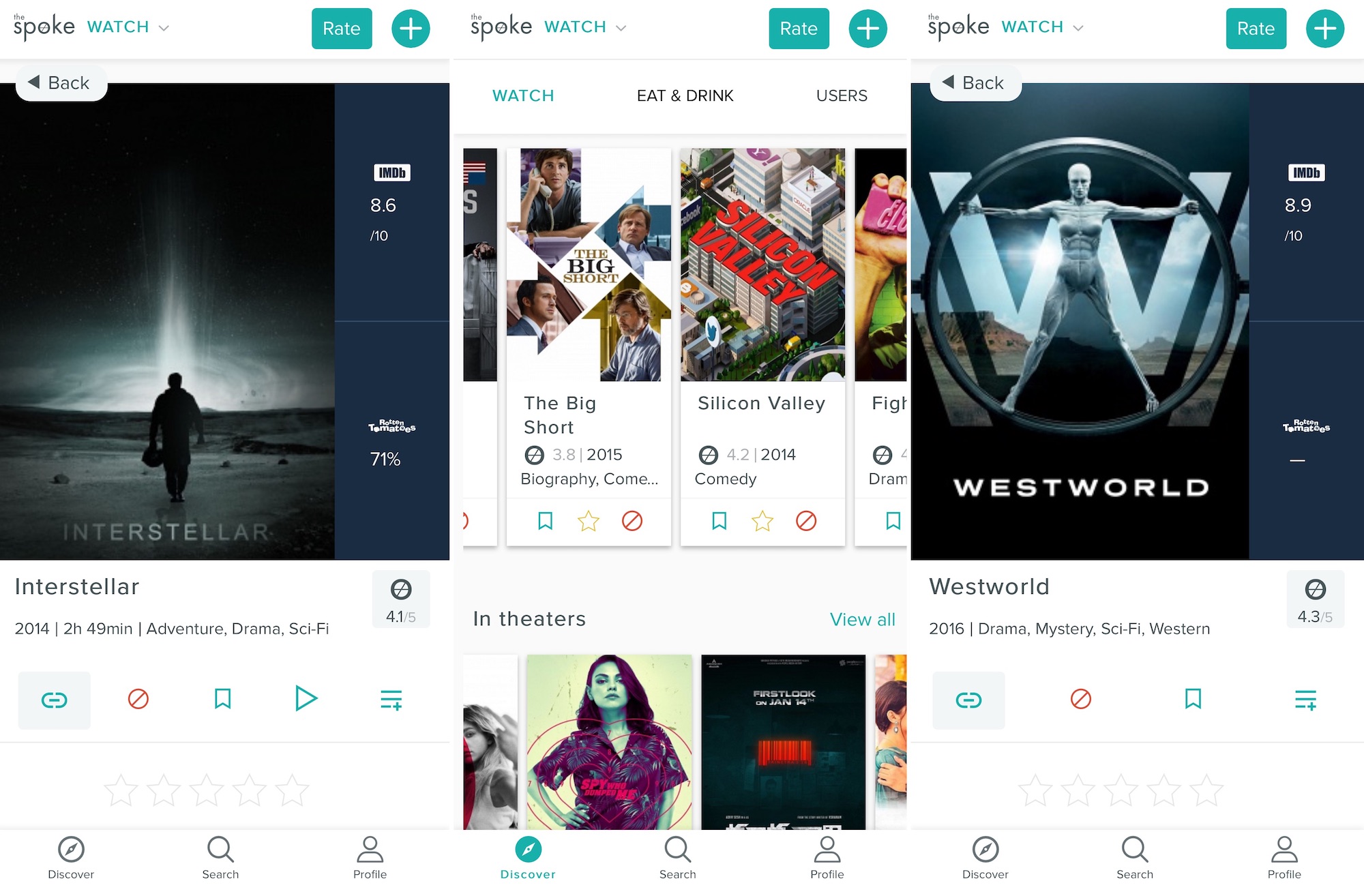 The main page for The Spoke includes the following sections:

What’s a movie geek? As you rate content, you receive points. The more points you earn, the higher you go on the movie geeks list.

Each TV show and film listed in The Spoke includes highly detailed information such as its IMDB and Rotten Tomatoes score, release date, list of stars, an About section, and more. There are also tabs that detail where you can stream, rent, or buy the content, when applicable. It’s from these information pages where you can rate the content and also add it to your own lists.

You can also use the app’s Search feature to find TV shows and movies by name.

One area under Watch that needs to be improved is the In theaters section. The content listed here isn’t location-based, nor are the titles always up-to-date. I also noticed a long list of foreign movies, some of which aren’t even available to watch in the U.S. Hopefully, this will be fixed in a future app update. 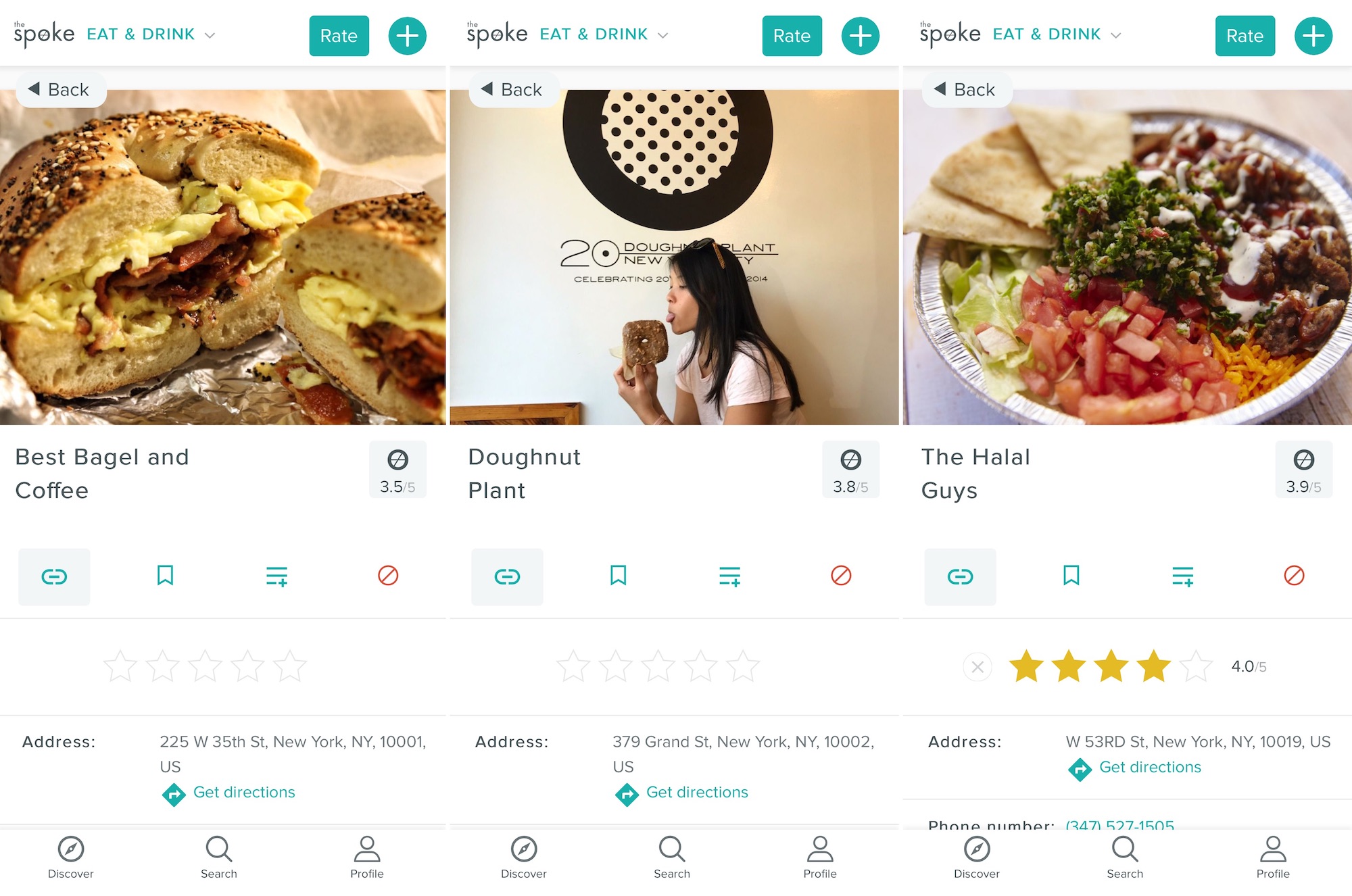 This section is nearly identical to Watch, except instead of TV shows and movies, you’re asked to rate local restaurants. In doing so, The Spoke will recommend places to go, according to your preferences.

The Eat & Drink section uses data from Yelp. There are also sections called “Order Now” and “Book a Table,” although the latter looks like a work in progress. 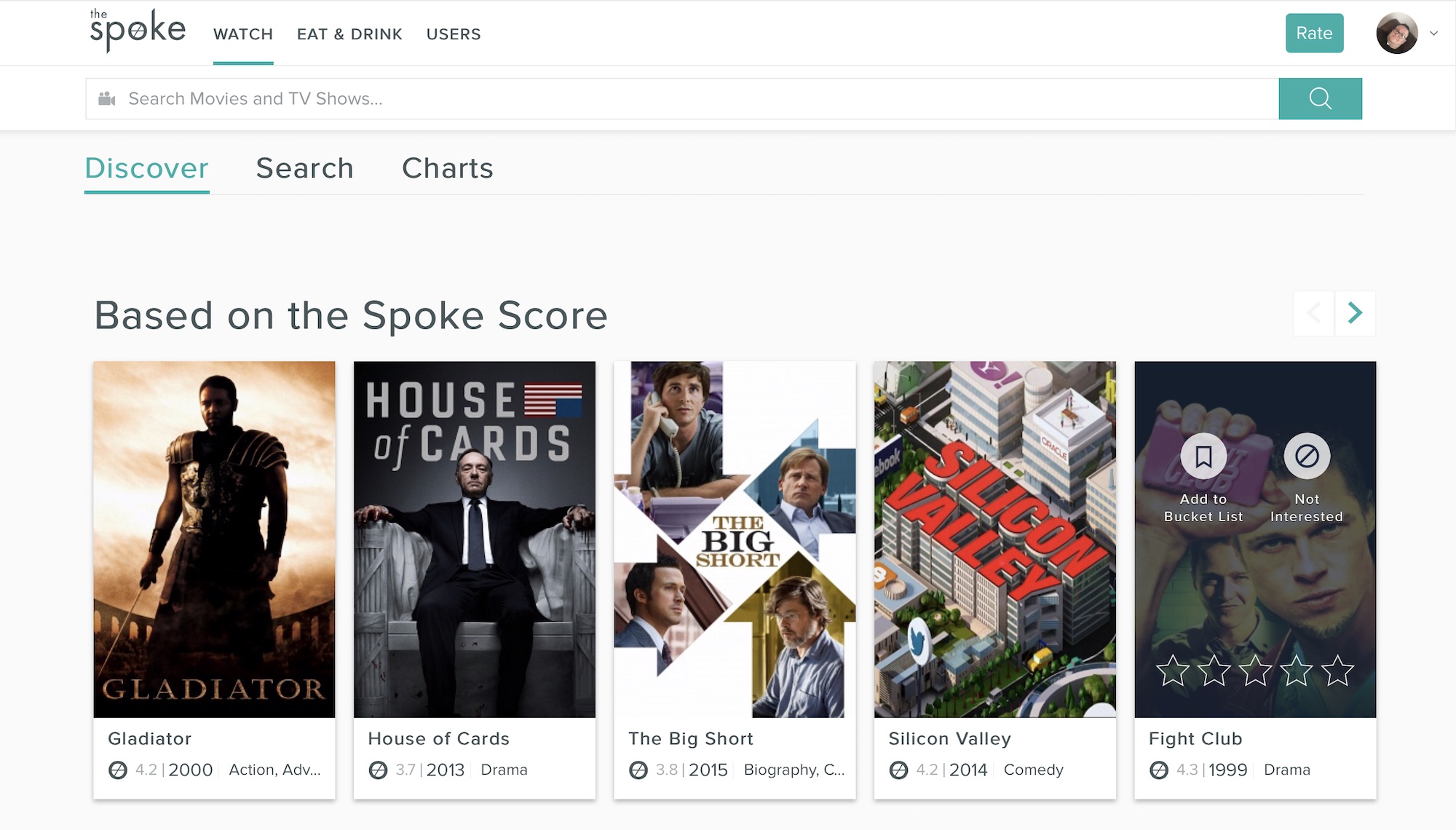 I’ve been using The Spoke for about a month, and as you might have guessed, I found the Watch section much better than Eat & Drink. It’s not that the second section is terrible because it’s not. Rather, that part of the app is unremarkable. There are a countless number of apps already on the App Store that rate places to eat. Because of this, The Spoke would be wise to concentrate its efforts on making the Watch section even better, while leaving foodie reviews to others.

If you find it difficult to find TV shows and movies that match your interests, you should consider checking out The Spoke. Although it’s not perfect, the app makes finding great content on your iOS device simple.

You can download The Spoke on the App Store. You can also use the service online on The Spoke’s website.