Thursday, Apple welcomed the general public and members of the press to the scheduled grand opening of its breathtaking new flagship retail store and amphitheater at Milan’s Piazza del Liberty square. Italy’s seventeenth Apple retail location and its first based on next-generation Apple retail design comes with a dramatic glass fountain on the outside.

Angela Ahrendts, the iPhone maker’s Senior Vice President of Retail, as well as Chief Design Officer Jony Ive along with the company’s entire design team, were all in attendance to mark the significance of the country’s first next-generation Apple retail outlet. 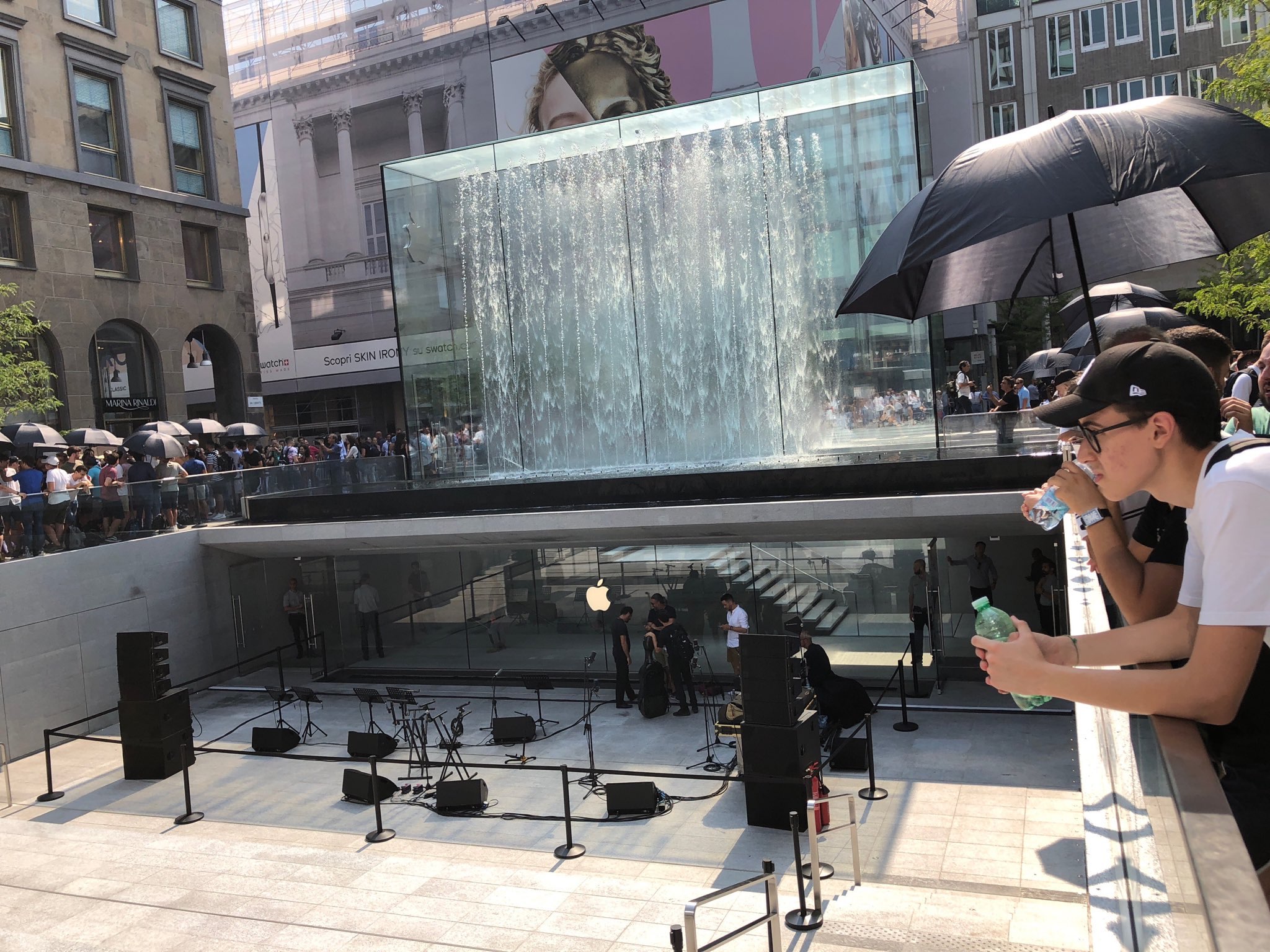 You can find photos showcasing the opening celebrations and the Piazza Liberty store itself on social media and in our previous write-ups linked in the opening paragraph at the top. 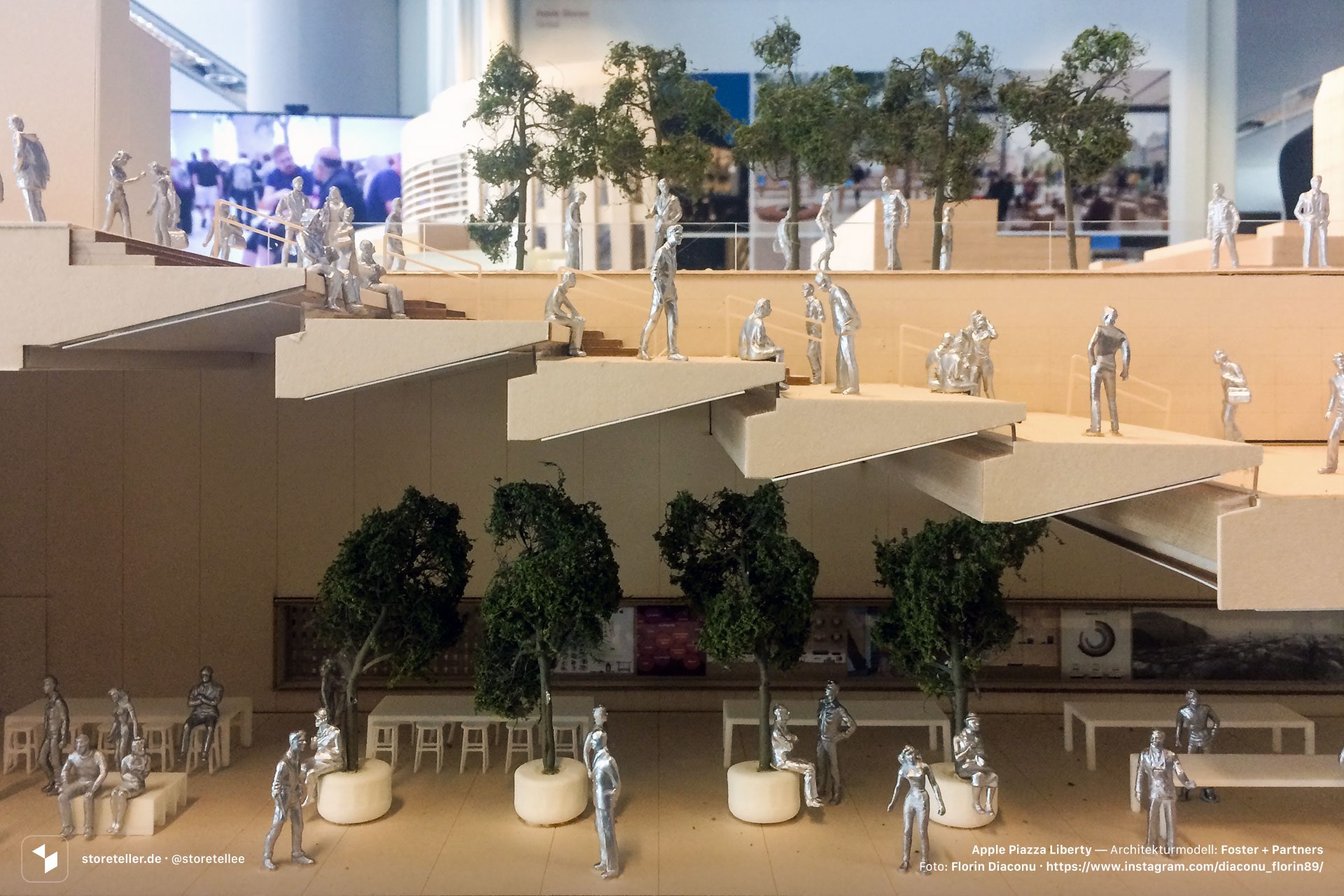 The store’s extraordinary structure uses crucial elements of the company’s next-generation retail design language, such as Gleditsia Sunburst tree, rows of wooden display cases, a massive video wall, a seating area called The Forum and the Boardroom, a business area. 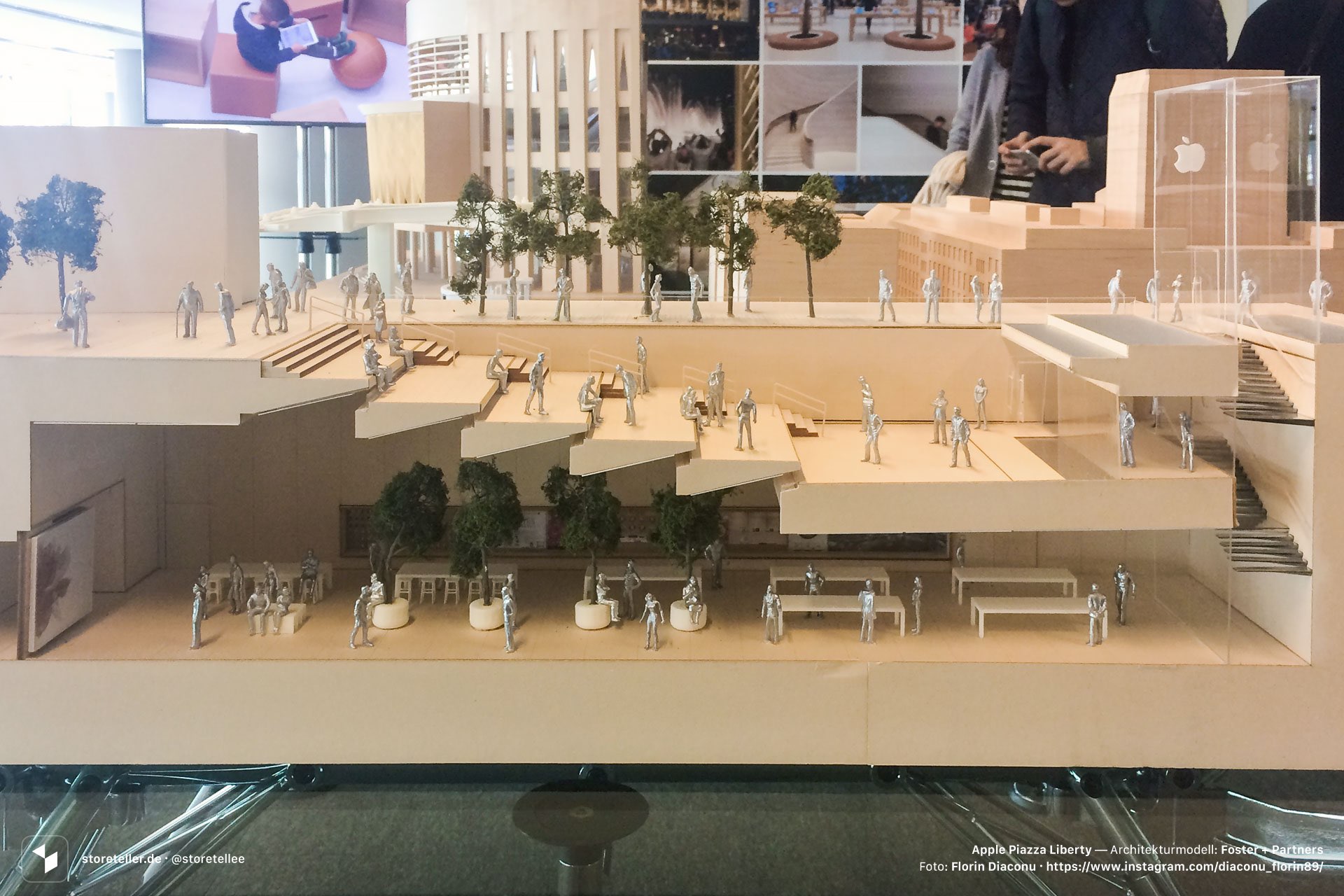 This undeniably cool miniature was exhibited during the Open House Days in September 2017 by Foster + Partners, a London-based architectural firm that has helped create Milan’s breathtaking new store and previously worked on the ring-shaped Apple Park headquarters.

The piazza, the interior and the metal staircase were all cantilevered from the same impressive trademark Beola Grigia stone that can be seen used throughout Italy’s fashion capital. 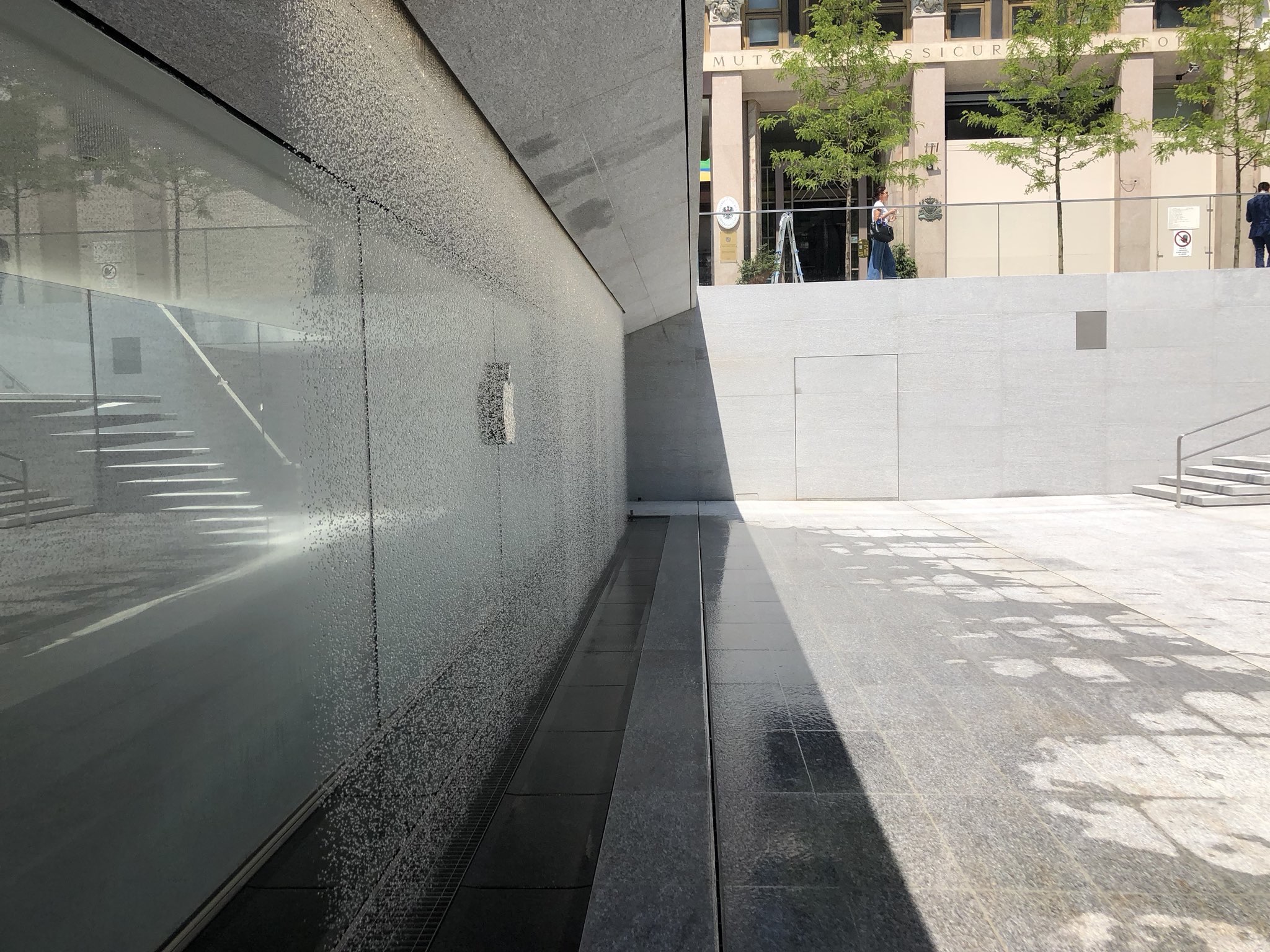 The sales floor beneath the cozy outdoor amphitheater is accessible by walking down the staircase situated between a pair of waterfalls that form part of the larger fountain. 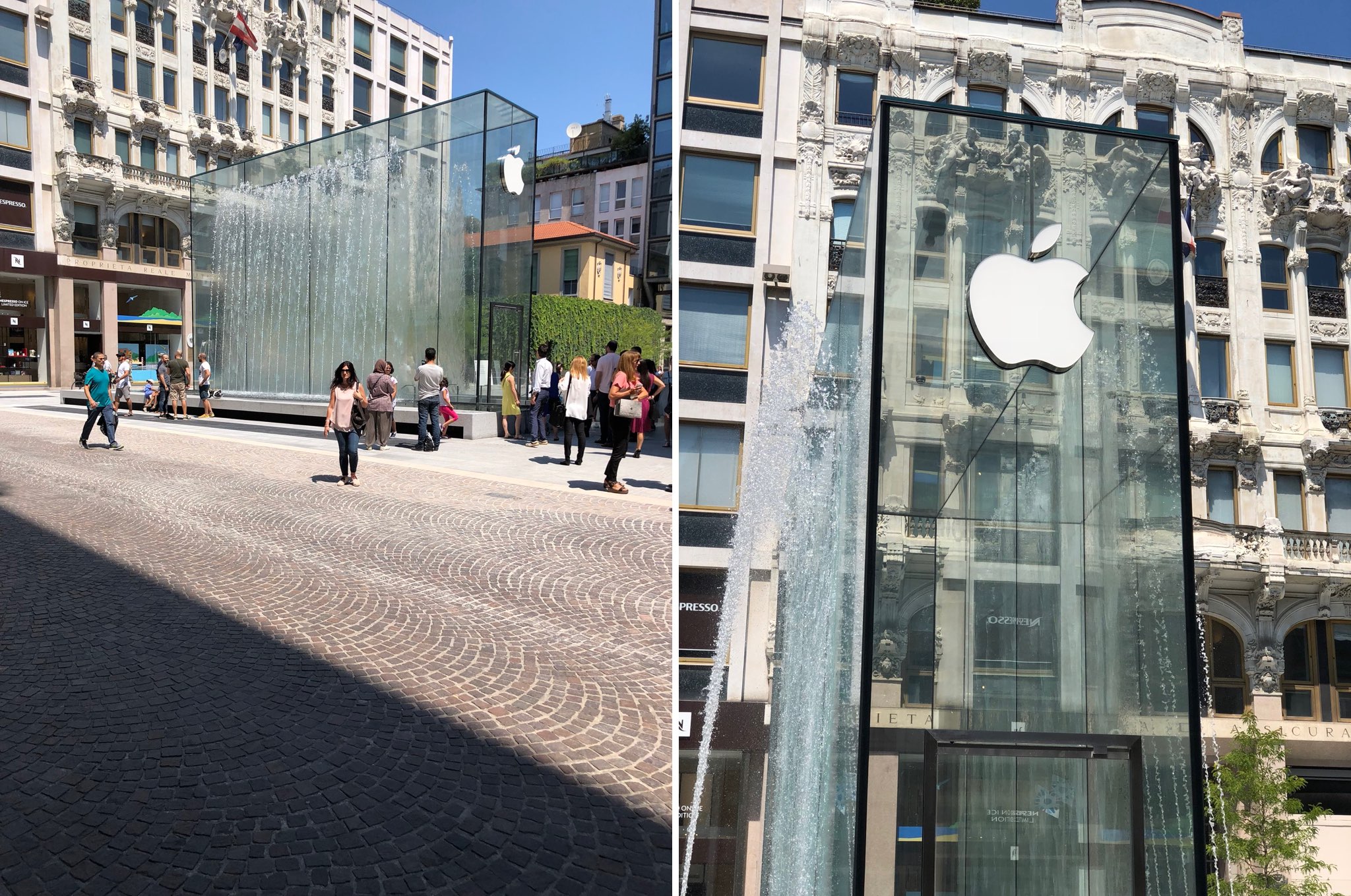 The fountain, realized by the revered water installation designers Watercube, serves as a tribute to the famous Italian squares which connect the city with its residents.

In the video embedded below, an architect and Senior Executive Partner at Foster + Partners, Stefan Behling, explains how he worked with Apple’s design team on the new store.

In other Apple retail news, the Cupertino company has scheduled grand opening of a remodeled retail store in Walnut Creek, California at Saturday, July 28.

The remodeled retail outlet will be located a short walk down the road in the same space that the old store had occupied since first opening in 2003. Apple also recently moved Seattle’s aging University Village store to a more modern space nearby.