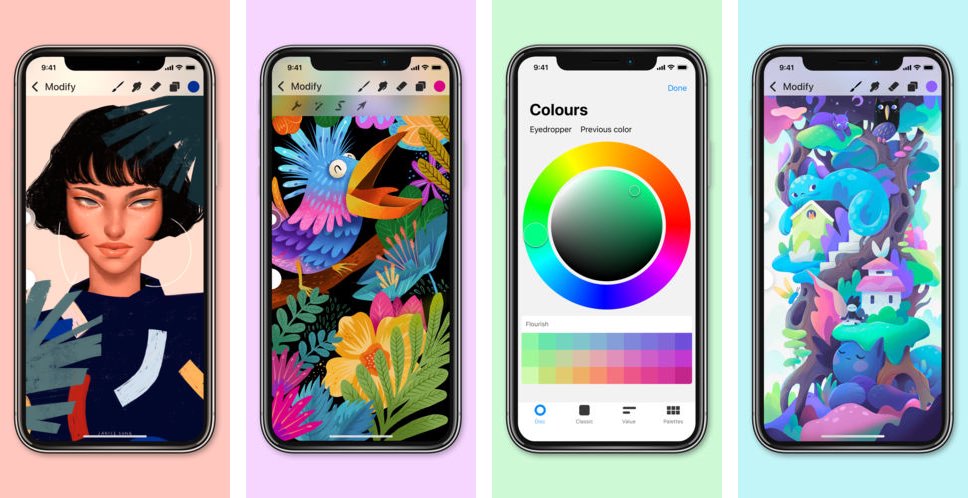 Procreate Pocket, an iPhone and iPad version of the powerful sketching, painting and illustration app for iPad, has received a major 2.0 update on App Store this morning.

Procreate Pocket 2, a major new version, has been completely reimagined for iPhone and features an all-new user interface and full iPhone X compatibility which permits the app to take full advantage of that edge-to-edge OLED panel.

The Hobart, Australia-based developer calls it the “most advanced version of Procreate Pocket we’ve ever built.” Redesigned and reengineered from the ground up, Procreate Pocket 2 brings 136 handcrafted brushes and some really cool new wet painting effects to create beautiful artworks with your finger doubling as a stylus.

The newest version of the app includes two iPhone-only capabilities: a time lapse feature that drops non-essential frames to create a shortened 30-second time-lapse and the ability to import and export brush sets through online marketplaces.

If your iPhone has 3D Touch, you can even do pressure-sensitive painting.

This version of Procreate Pocket uses the same speedy Silica-M engine based on Apple’s Metal framework as Procreate 4 for iPad, which supports Apple Pencil as well. The app also takes advantage of multi threading so the more CPU cores your device has the better.

“We literally threw the Procreate Pocket 1.0 codebase away and started fresh. Every pixel and every line of code is new, and we’re so happy to finally bring Silica-M to our iPhone users,” said James Cuda, CEO and co-founder of Savage.

Thanks to the aforementioned changes, customers will find that almost everything they know and love about the iPad app “now fits in their Pocket.”

The update is free for existing users of the app.