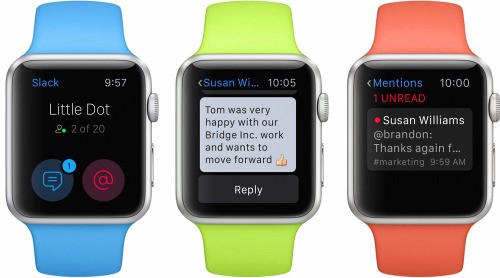 Popular cloud-based enterprise team collaboration service Slack has removed its Apple Watch app from the most recent update to its app on App Store.

The company noted in release notes accompanying the version 3.36 update that the app continues to support rich notifications, meaning that users can still respond to incoming messages on their wrist. However, without a native watch app, users will have to open Slack for iPhone to read direct messages.

On the other hand, I’m not sure heavy Slack users will be happy with limited functionality of the app on their Apple Watch. Slack’s dedicated watchOS app allowed users to browse rooms, switch workplaces, view the number of unread messages in a given workspace, respond to chats with dictation and emoticons, message individual users and so forth.

A statement from Slack reads:

Apple Watch users, there’s now one iOS app for all of your needs. We’ve removed the standalone Watch App, but rest assured, receiving and replying to messages from your wrist works the same as before. It’s like two for the price of one, but with apps.

Several other well-known apps have pulled Apple Watch support citing limited watchOS functionality and lack of interest, including Twitter, Target, Whole Foods, Google Maps, Amazon and eBay, instead opting for iOS-based notifications for those who own an Apple Watch.

Slack is available at no charge from App Store.