Even though Touch ID could be used to authorize family purchases, an increasing number of parents who bought an iPhone X are discovering that they’re unable to approve their kids’ iOS purchases and downloads with the handset’s new Face ID facial recognition system.

ArsTechnica pointed to a thread on Apple’s support forums in which many parents vented their frustration because Face ID wouldn’t work with the Ask to Buy feature.

Optionally enabled after setting up Family Sharing, Ask to Buy makes it simple for parents to approve any app or media purchases their children make in iTunes and App Stores.

With Touch ID, the family organizer sees a push notification on their device every time a kid taps the Buy button in App Store, iTunes Store or iBooks Store. 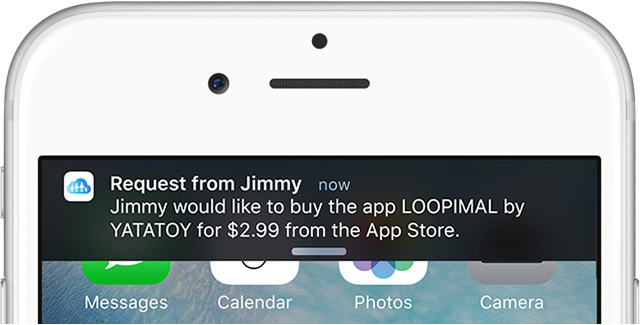 They can authorize or cancel the purchase with a single tap.

iPhone X’s Face ID, however, apparently requires that parents manually enter their passcode and Apple ID password even time an Ask to Buy notification appears on their device. That Apple has not made it clear why this limitation is in place isn’t helping either.

As ArsTechnica summed it up:

Parents of large families with several children, each of whom might have an iOS device available to them, will find that the requests mount up quite quickly—especially right after the holidays. Kids cashing in App Store gift cards add to the requests already coming in from normal use and in-app purchases in games.

As we’re only at the beginning of Face ID’s journey, the Cupertino tech giant has probably decided to play it safe with Face ID and only support the most essential features such as device unlocking, approving purchases, replacing Touch ID in apps and more.

Other functions, like registering multiple faces and approving family purchases, will most likely be gradually rolled out in future software updates. Still, want parents are frustrated—rightfully so fiven equivalent functionality was available with Touch ID.