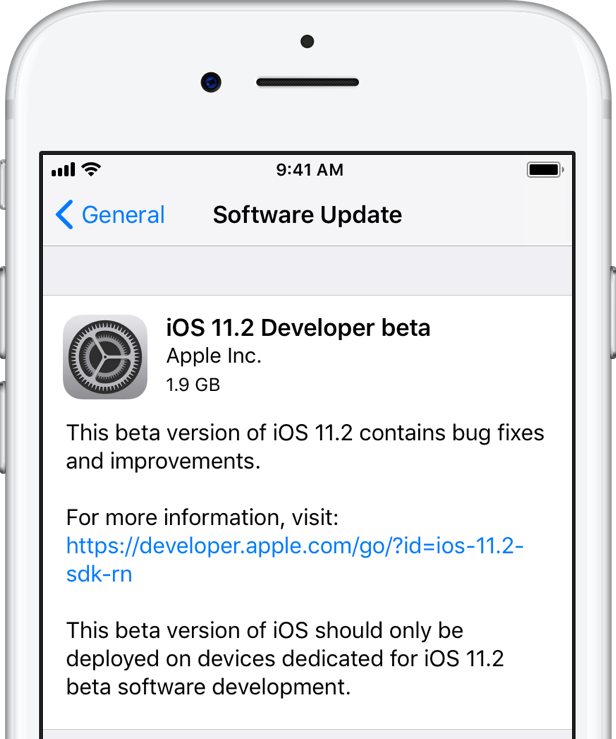 Although the upcoming iOS 11.1 software update is still in testing, Apple on Monday issued the all-new iOS 11.2, tvOS 11.2 and watchOS 4.2 betas to its registered developers and members of the paid Apple Developer Program.

Weighing in at around two gigabytes (depending on your device type), iOS 11.2 beta 1 (build number 15C5092b) can be deployed on an iPhone, iPad or iPod touch with an appropriate configuration profile installed (available for download in Apple’s Dev Center).

Release notes don’t mention any new features aside from stating that in iOS 11.2 beta 1 or later, the user interface of a photo editing extension is no longer limited to the safe area.

We have managed to spot a few changes, however.

For starters, iOS 11.2 fixes the annoying input lag in the Calculator app.

Several emoji have been tweaked and now Apple’s iPhone 8, iPhone 8 Plus and iPhone X marketing wallpapers are available on older iPhones as well. The flickering boot logo problem has been fixed in iOS 11.2 and you’ll also notice a slightly tweaked Now Playing card in Control Center when AirPlaying content to an Apple TV.

And lastly, the iOS 11.2 beta marks the arrival of SiriKit for HomePod, which will permit HomePod owners to conveniently access iPhone and iPad apps that support SiriKit for Messaging, Lists and Notes.

The promised features like Apple Pay Cash or Messages in iCloud are absent from iOS 11.2 beta 1, but could appear in one of subsequent betas.

The new WatchOS beta (build number 15S5085b) can be deployed on an Apple Watch with an appropriate configuration profile installed using the Software Update mechanism in the companion Watch app on a paired iPhone running the iOS 11.2 beta.

The tvOS 11.2 beta (build number 15K5085b) is available through the Software Update mechanism on an Apple TV with an appropriate configuration profile installed.

As we separately reported, tvOS 11.2 improves the media experience for owners of the new Apple TV 4K by introducing two new switches in Settings to tell the device to automatically match the native frame rate and dynamic range of video content.

We’ve also noticed a revamped, much thinner progress indicator when the device is booting.

See any notable changes in the new betas?