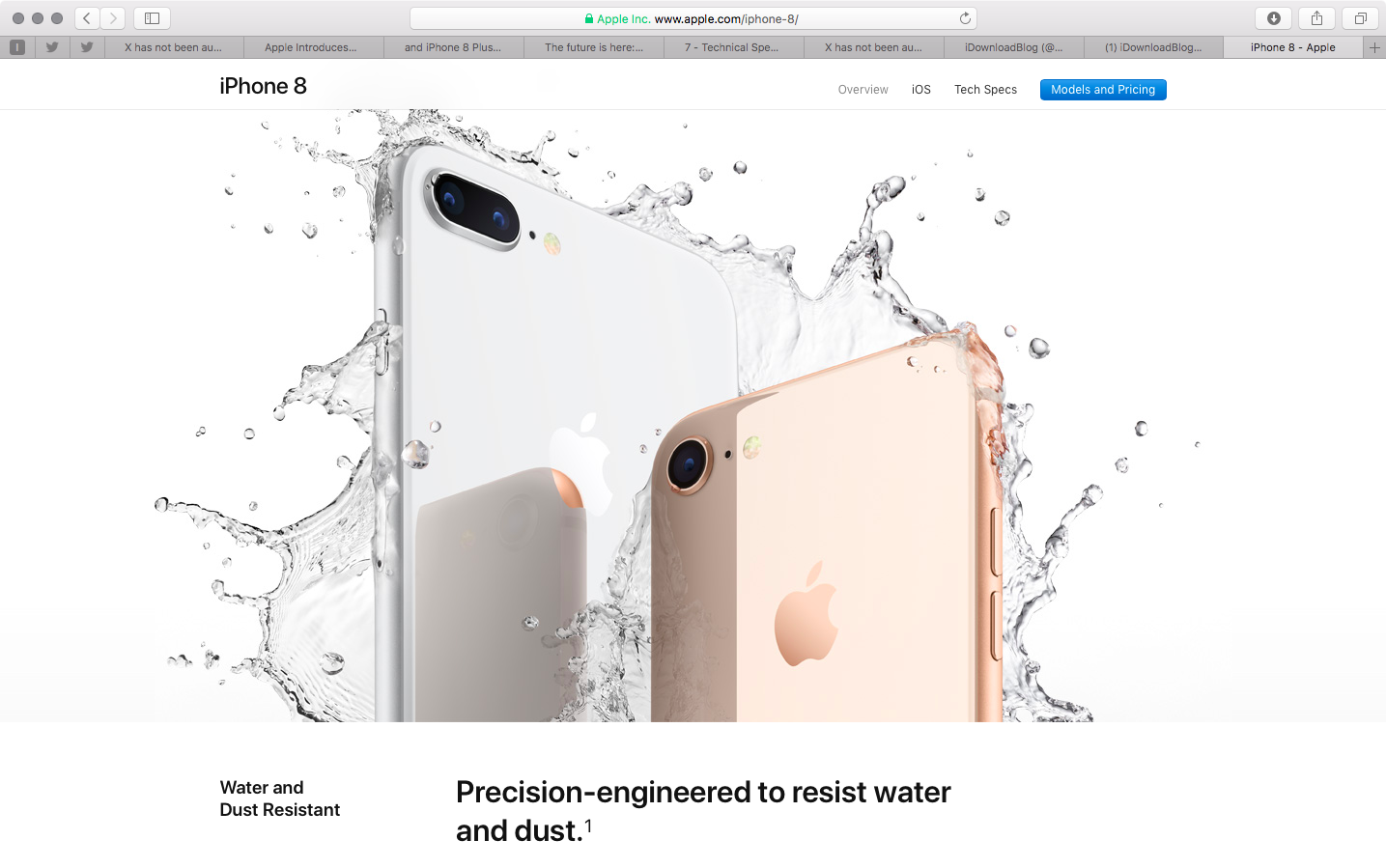 iPhone 8 and iPhone 8 Plus are “precision‑engineered to resist water and dust,” in Apple’s own words, as is the flagship iPhone X model, but the company has not increased water resistance of the new phones as some were hoping it would.

According to Apple’s iPhone X and iPhone 8 webpages, the new devices have exactly the same dust, splash and water resistance just like last year’s iPhone 7 models.

In other words, iPhone 8 and iPhone X are still rated IP67 under IEC standard 60529. The Korea Herald reported back in January that the new iPhones would feature increased IP68 water resistance like Samsung’s flagship Galaxy smartphones.

As a quick backgrounder, the first digit in these IP ratings determines a device’s dust proofing and the other tells you how water resistant it is. The higher the number, the better protection.

A rating of 7 means that “ingress of water in harmful quantity shall not be possible when the enclosure is immersed in water under defined conditions of pressure and time (up to 1 meter of submersion)” according to the International Electrotechnical Commission (IEC).

The digit 0 is used where no protection is provided. 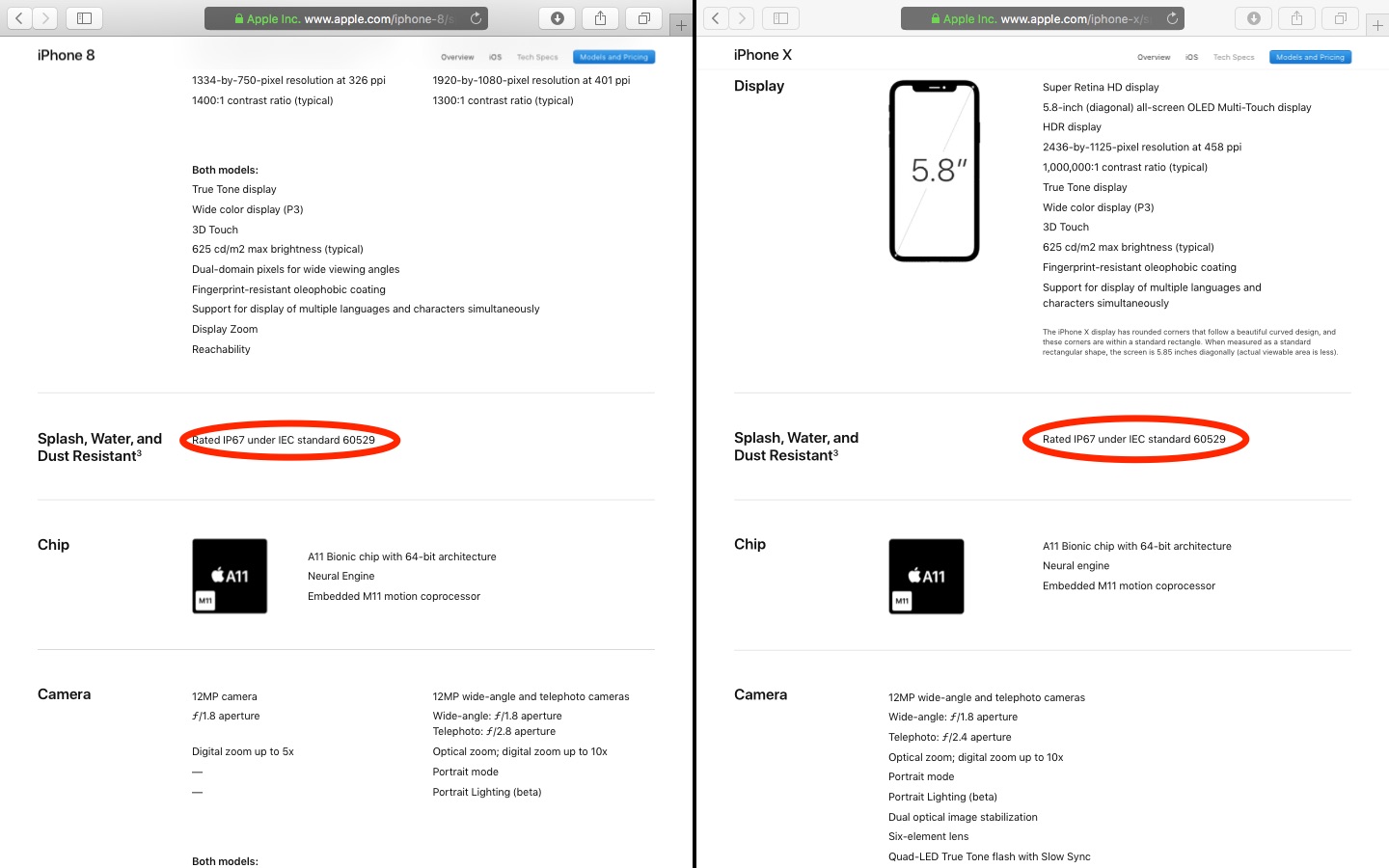 By comparison, Samsung’s Galaxy S8 and Note 8 smartphones (along with the new S Pen) have slightly better IP68-rated water and dust resistance allowing them to be submerged up to 1.5 meters for 30 minutes.

An excerpt from Apple’s fine print for the iPhone 8 series:

iPhone 8 and iPhone 8 Plus are splash, water, and dust resistant and were tested under controlled laboratory conditions with a rating of IP67 under IEC standard 60529. 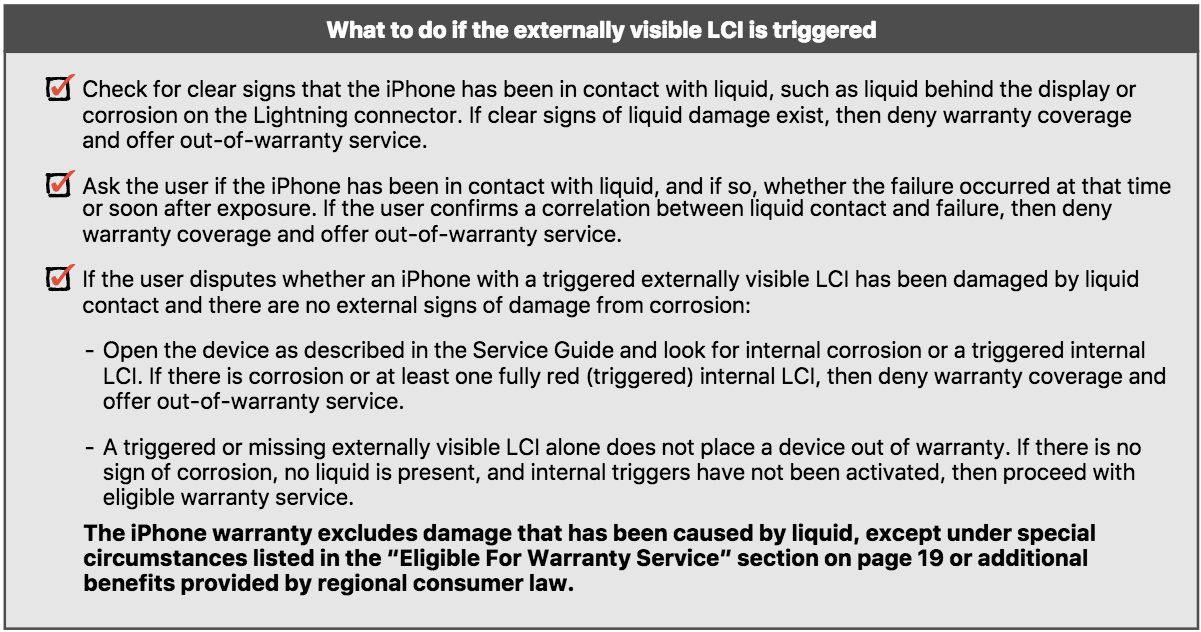 Apple’s internal repair guide instructs service technicians to pull apart a phone and check its internal indicator, which turns red when exposed to water, for any sings of liquid damage.

Both Wi-Fi and LTE models of Apple Watch Series 3 are water resistant up to 50 meters under ISO standard 22810:2010, just like last year’s Series 2. According to Apple, this lets you use your watch for shallow-water activities like swimming in a pool or ocean.

“Apple Watch Series 3 should not be used for scuba diving, waterskiing, or other activities involving high-velocity water or submersion below shallow depth,” reads the fine print. 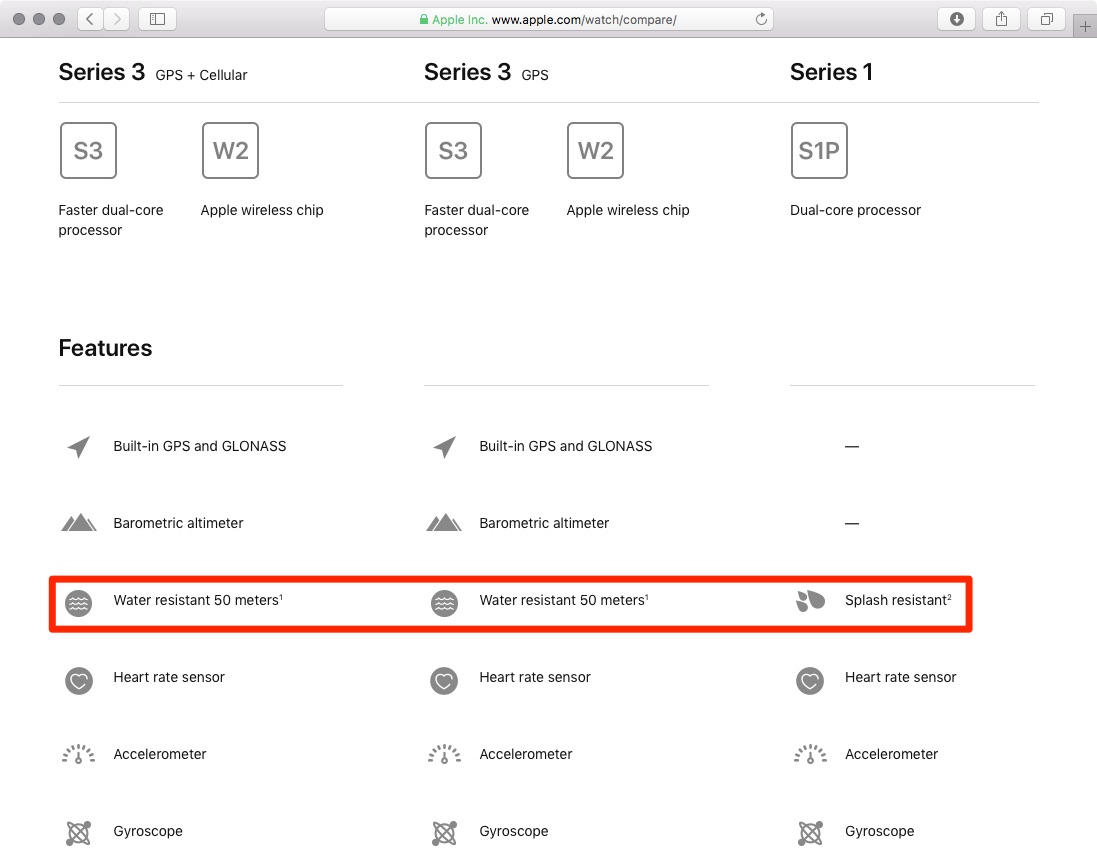 The original Apple Watch has a water resistance rating of IPX7 under IEC standard 60529, but you’re advised against submerging it. Stainless steel and leather bands are not water resistant.

Again, this isn’t a big deal but is something you should keep in mind if you plan on buying an iPhone X, iPhone 8 or Apple Watch Series 3 and were hoping for increased water resistance.

Liquid damage is not covered under Apple’s standard 1-year warranty so keep that in mind, too.