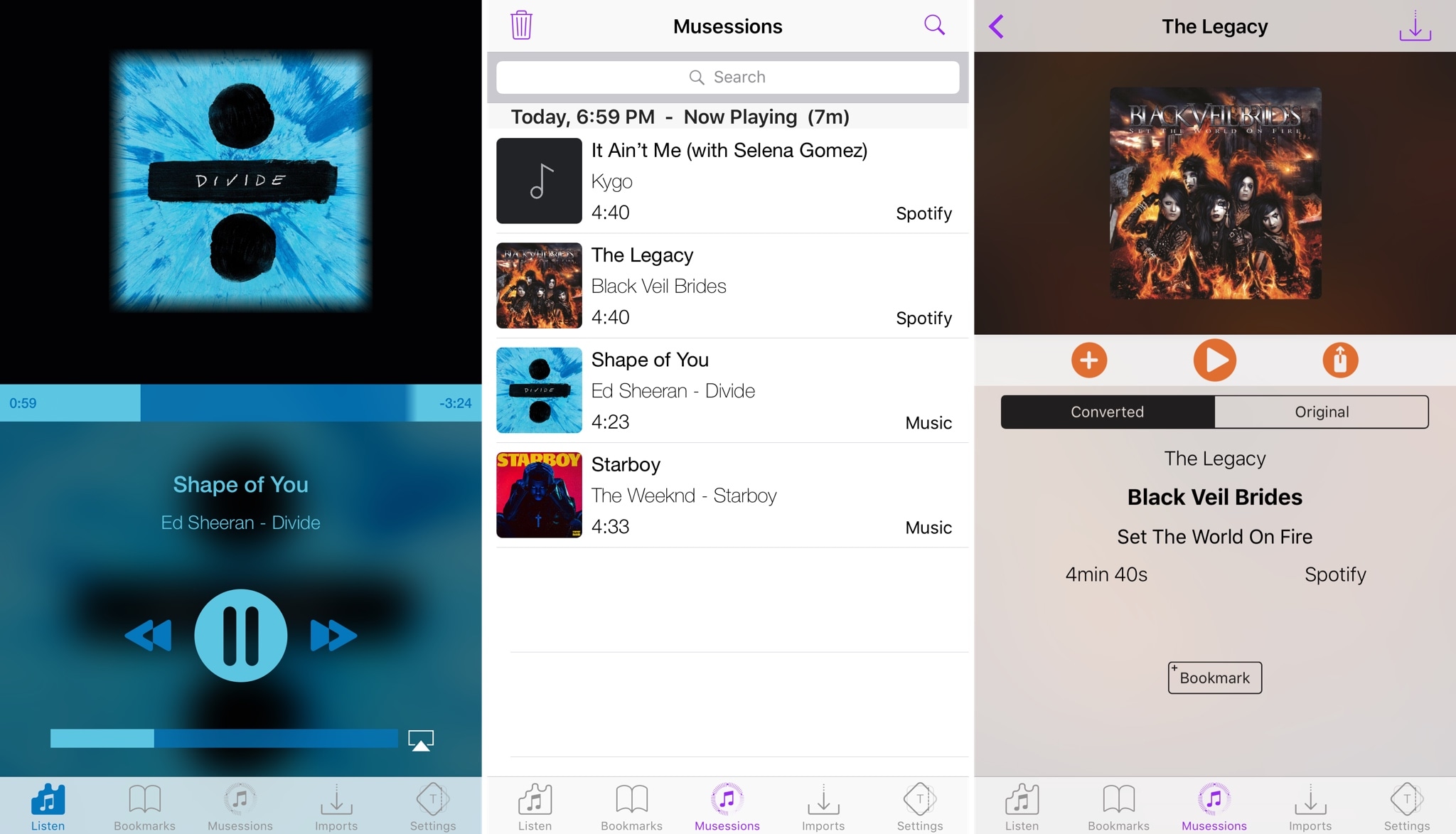 Perhaps one of the most important ways people use their iPhones is to listen to music, but sometimes you will use a bevy of different apps rather than just Apple Music.

With a new jailbreak tweak called Musessions by iOS developer creativeBeing, you can track your music history more efficiently and import songs from other apps directly into your stock Music app.

Musessions tracks everything you hear from every app in a running history list. Even if you listen to a song from Pandora, and then jump to Spotify to hear to another song, the app keeps track of it.

Music tracking can be toggled on or off on demand, either with a switch in the app itself or with Activator. If you choose not to be tracked for a while, you can simply disable your music tracking until you’re ready. You can even configure your device to automatically delete your song history after a period of time.

Thanks to Musession’s its built-in media player, you can quickly preview songs you’ve listened to previously. The app also includes functions for bookmarking points in a song or sharing music with your friends. 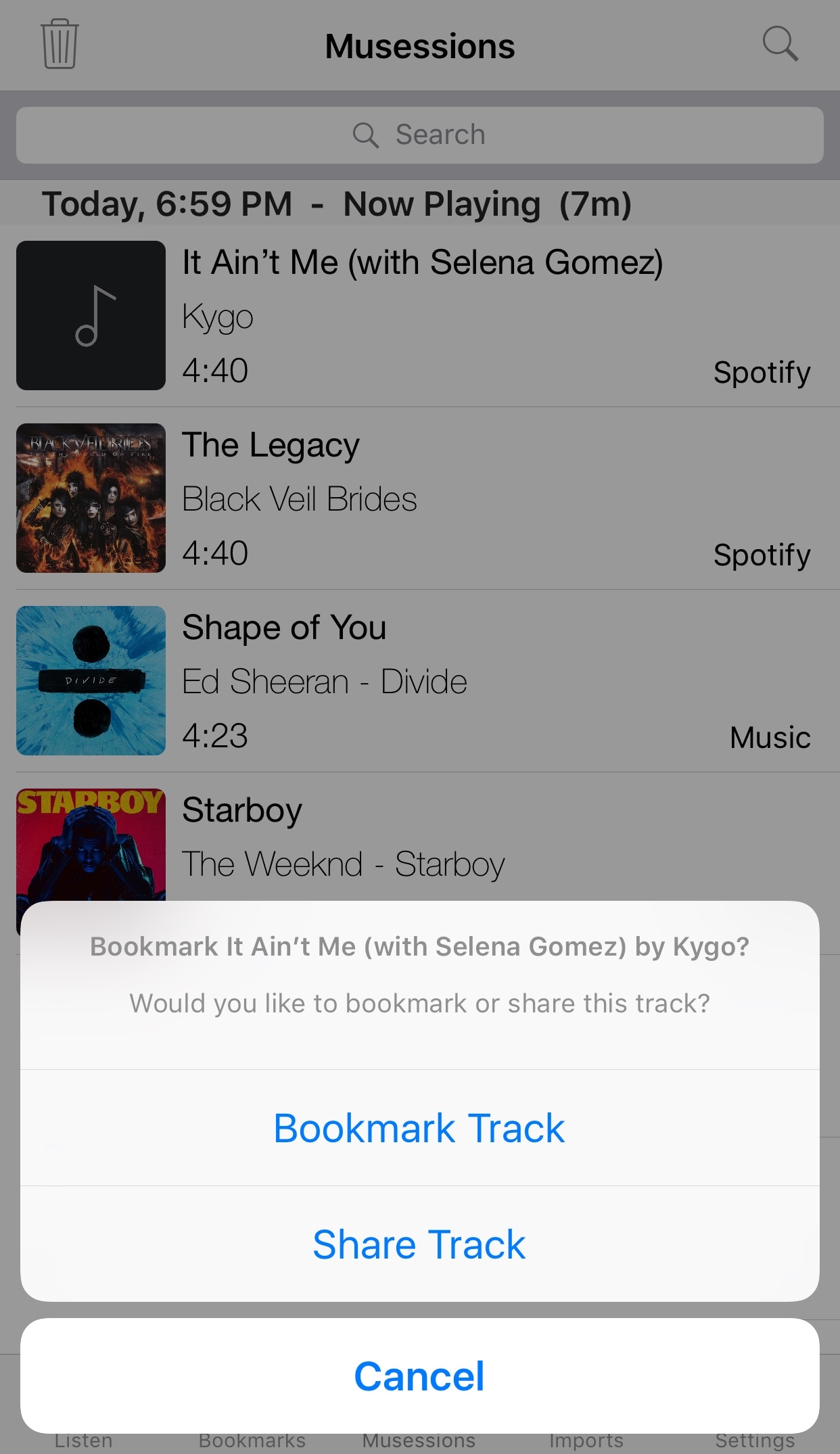 The bookmarking feature is one of my favorites because it lets you tag a particular place in a song, such as when a wicked guitar solo begins. When you return to the bookmark, you can re-live that moment again and again.

Among one of the app’s most important features is the ability to import songs from other apps to the stock Music app. You can do this with an active Apple Music subscription easily, but if you don’t have one, another extension from Cydia called Musessions Importer (free) is necessary to complete the task.

When importing, you can customize the song’s metadata, which includes removing extraneous symbols and picking whether album artwork and song data are sourced directly from Apple Music. You can import songs from the Musessions app, or with an Activator action.

You can also share tracks with friends, so they know what you’re listening to. You can share music with anyone, even if they’re not jailbroken or are using an Android device, and you can set the app up to share music manually, or automatically.

If you picked the latter, you could set up Do Not Disturb options to prevent yourself from spamming your contacts with song information in the middle of the night when you choose to jam out before bed.

Musessions has a few options you can configure directly from the app itself: 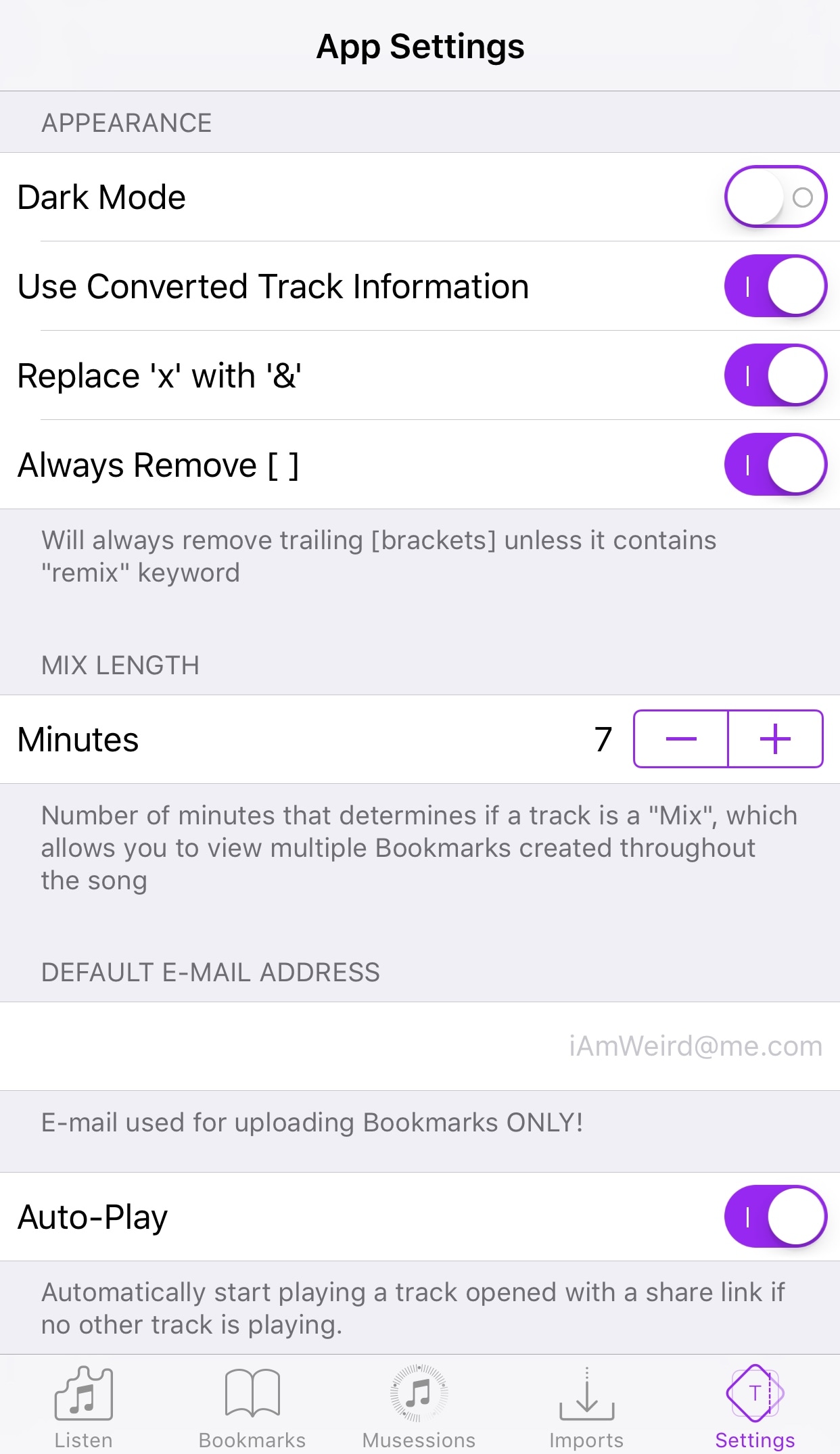 In addition to the options you’ll find inside the app, a dedicated preference pane is put in the Settings app: 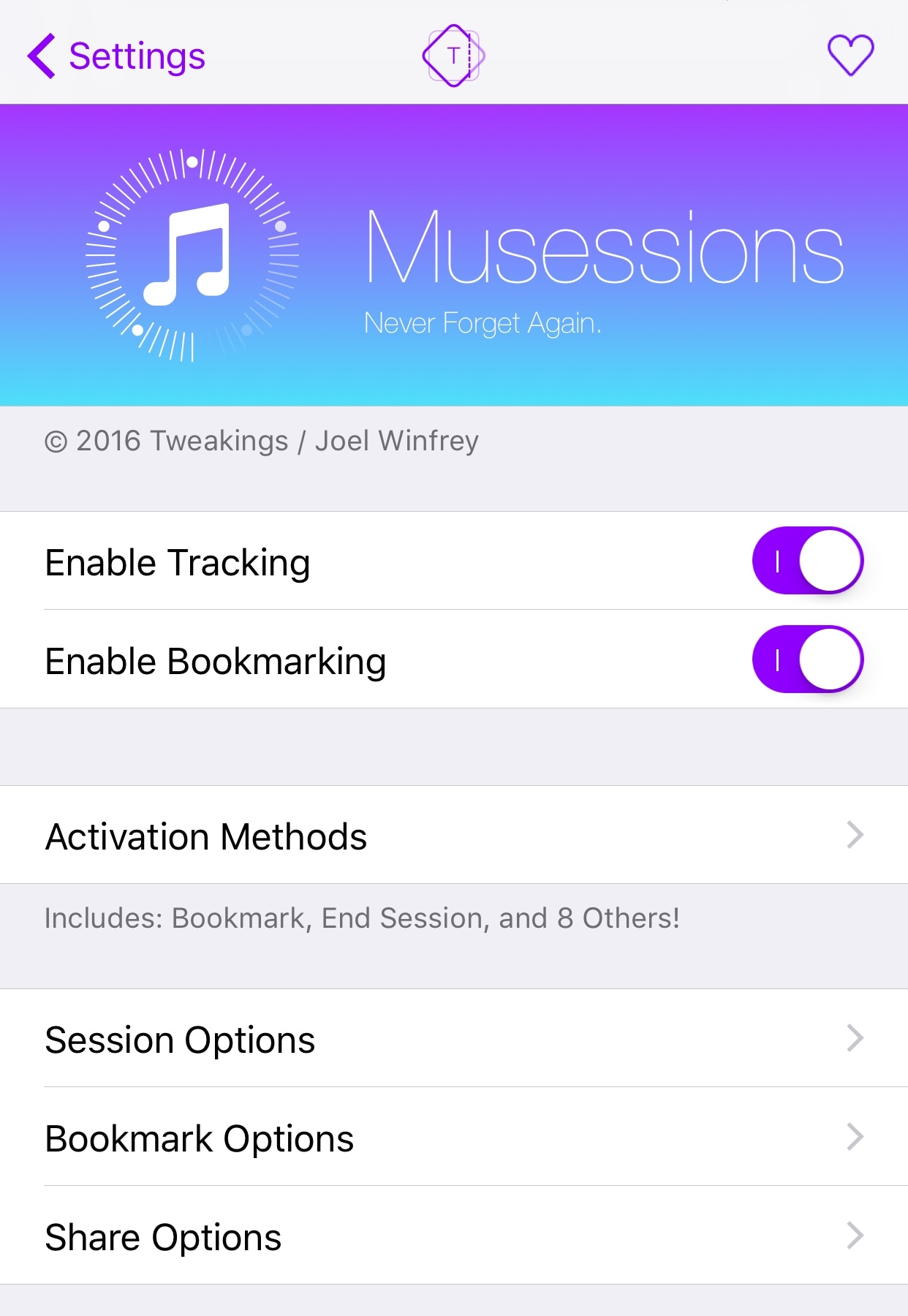 Here, you’ll be able to:

The three items at the end of the list above are broken down into several more settings: 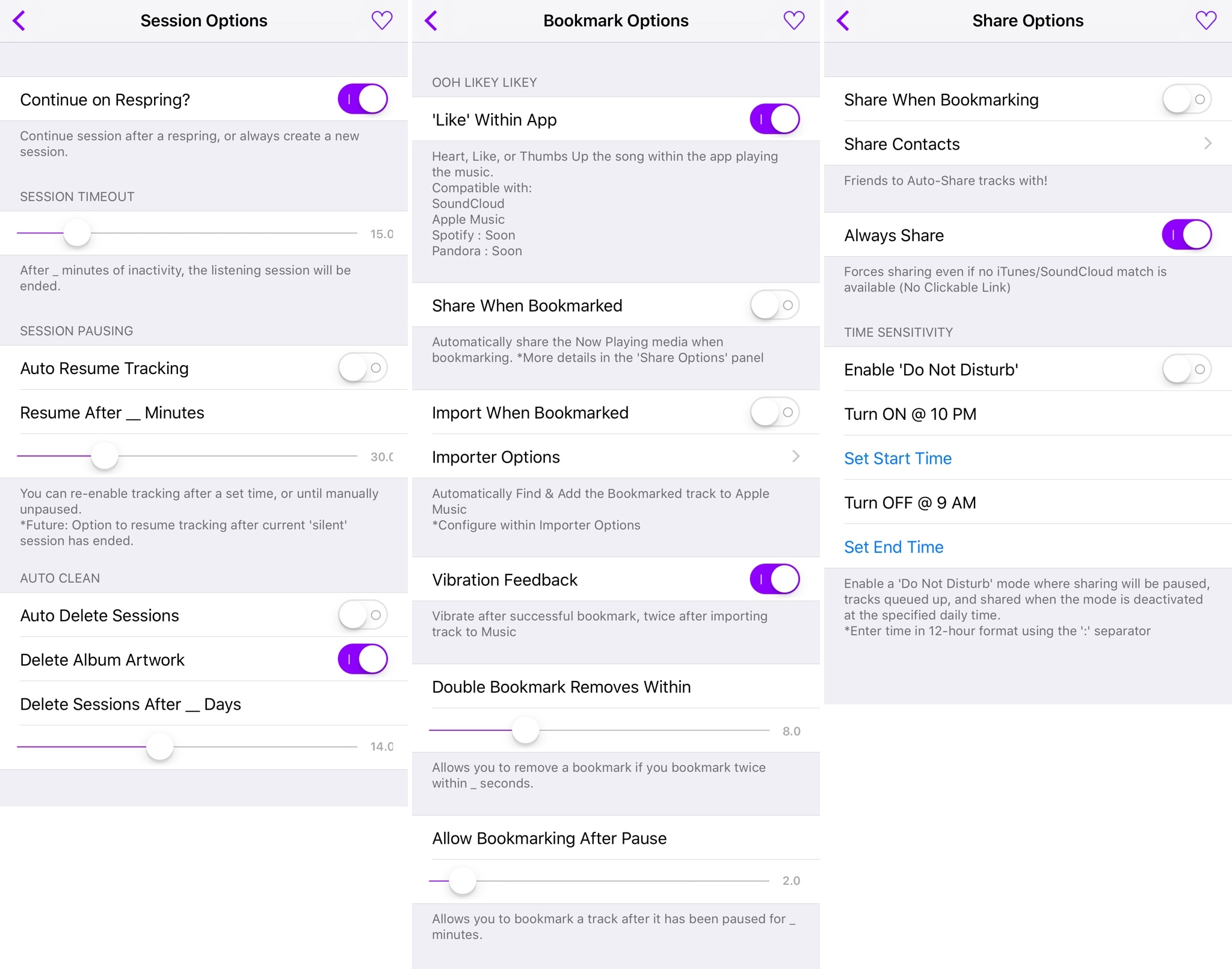 Among the things you can set in these sections are:

From my testing, the tweak works great if you’re trying to consolidate media from several apps into one and want an easier way to look back on your listening history.

I didn’t have much use for the importing feature as I’m alright with using Musessions as just a collective running history app, but others may see more value in importing songs directly into the Music app. As always, your mileage may vary.

With the careful attention to detail and the extensive Activator-supported feature set, Musessions is an impressive release. If you take your music-listening seriously, we would recommend this app for your device.

If you’re interested in trying Musessions, it’s available for $3.00 from Cydia’s BigBoss repository. The tweak works on jailbroken iOS 7-10 devices and updates about the tweak and its features are listed on the developer’s website for your convenience.

Will you be using Musessions to augment your music-listening experience on iOS? Share in the comments section below!