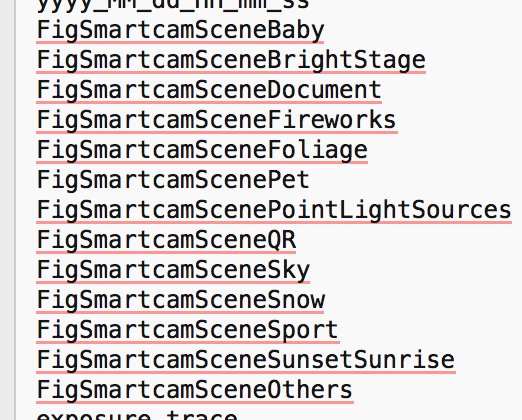 iOS developer Guilherme Rambo has unearthed (from Apple’s botched HomePod firmware release) curious references to some smart camera features that might be coming to iPhone 8.

As first noted by MacRumors, he has stumbled upon something called “SmartCam” that might allow a device to tune its camera settings based on the scene it detects, not unlike a range of scene presets that can be selected on many dedicated cameras.

Some of the supported scene types include Fireworks, Foliage, Pet, BrightStage, Sport, Sky, Snow, Sunset and Sunrise. It’s unclear if this feature will be available exclusive to iPhone 8.

I’m wondering if iPhone 8 could run this in real time. Object and scene recognition is CPU intensive—that’s why, upon opening the Photos app for the first time, you must wait before using advanced search until the system has analyzed all the images in your library.

“The automatic scene detection has few very specific categories,” Guilherme said. “Basically the ones listed in the screenshots.”

If you're already excited with #ARKit now, wait until we get access to face GEOMETRY pic.twitter.com/rrARXuZFM2

iPhone 8 is said to use 3D sensors to improve photography with 3D mapping, something that could be used to help the Camera app detect different types of scenes in real time.

Used with ARKit, those capabilities could even power an augmented-reality Maps app.

Another referenced feature, called FreezeMotion, mentions face scenes, pets, and babies. MacRumors says it might indicate new scene detection functionality for recognizing a fast moving target to auto-capture a photo at an ideal moment, but I’m not convinced.

Firstly, burst mode in the Camera app already does some of that. And secondly, iOS 11’s Photos app and its Moments feature can now recognize more stuff than before, including pets and babies. FreezeMotion could be tied to this existing capability.

At any rate, it seems Apple’s Emotient, Perceptio and FaceShift acquisitions are really starting to pay off big time. On a related note, Guilherme is a developer with Chibi Studio and they seem to be doing some interesting stuff with ARKit.

My creators are having fun with the new AR stuff on iOS 11 <3 #wwdc17 pic.twitter.com/rZ6cDVJcmB

By the way, I was working on a detailed tutorial today on extracting the HomePod firmware files so you could investigate what else might be lurking inside, but it seems Apple’s now changed the ZIP file hosted on its servers just slightly enough so it can no longer be unarchived.