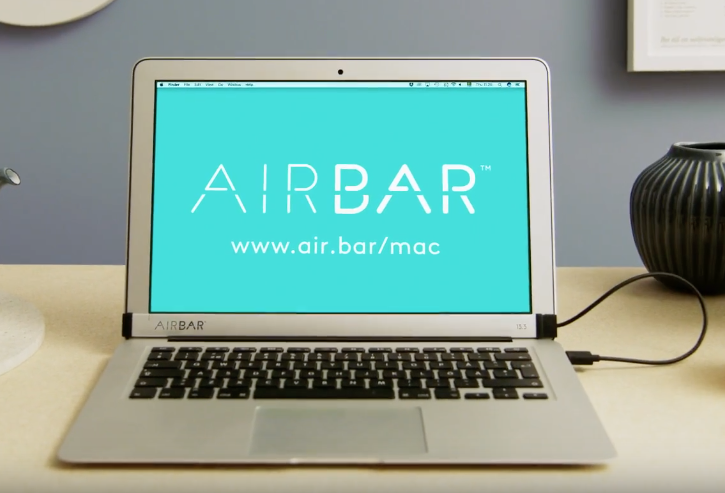 AirBar, a cool Mac touchscreen accessory that was announced at the Consumer Electronics Show in Las Vegas in January 2017, is now available to purchase for $99 at Fry’s Electronics, Evine.com and other retailers in the United States, its maker Neonode announced Tuesday.

The product will also launch through Amazon, Best Buy, Staples and other online outlets.

AirBar is basically a touchscreen sensor in the form of a USB laptop dongle that brings familiar touch gestures to your thirteen-inch MacBook Air. It uses an invisible light field projected on the surface of the MacBook Air’s display to detect objects like a finger or stylus.

When an object breaks the light, the accessory is able to detect its precise position and distinguish between gestures like tapping, swiping, scrolling and pinch-zooming.

We’ve seen an overwhelmingly positive response from the Apple community since our big debut of AirBar for MacBook Air at CES this year. Other Apple devices, such as the iPhone and iPad, have helped consumers become accustomed to a range of touchscreen products for several years now.

It’s a natural progression for MacBook Air to have touchscreen capabilities, and we are thrilled to provide Apple enthusiasts with this completely new way to interact with their MacBook Air notebook.

Neonode’s patented zForce AIR technology lets you use anything from a gloved finger to a paintbrush to interact with the MacBook Air’s screen, ideal for scrolling through emails, reading e-books, zooming in on images and more.

The product is plug-and-play though support for additional gestures requires the installation of the AirBar multitouch software. AirBar does not support other Mac notebook models because it needs 17mm of free space below the display.