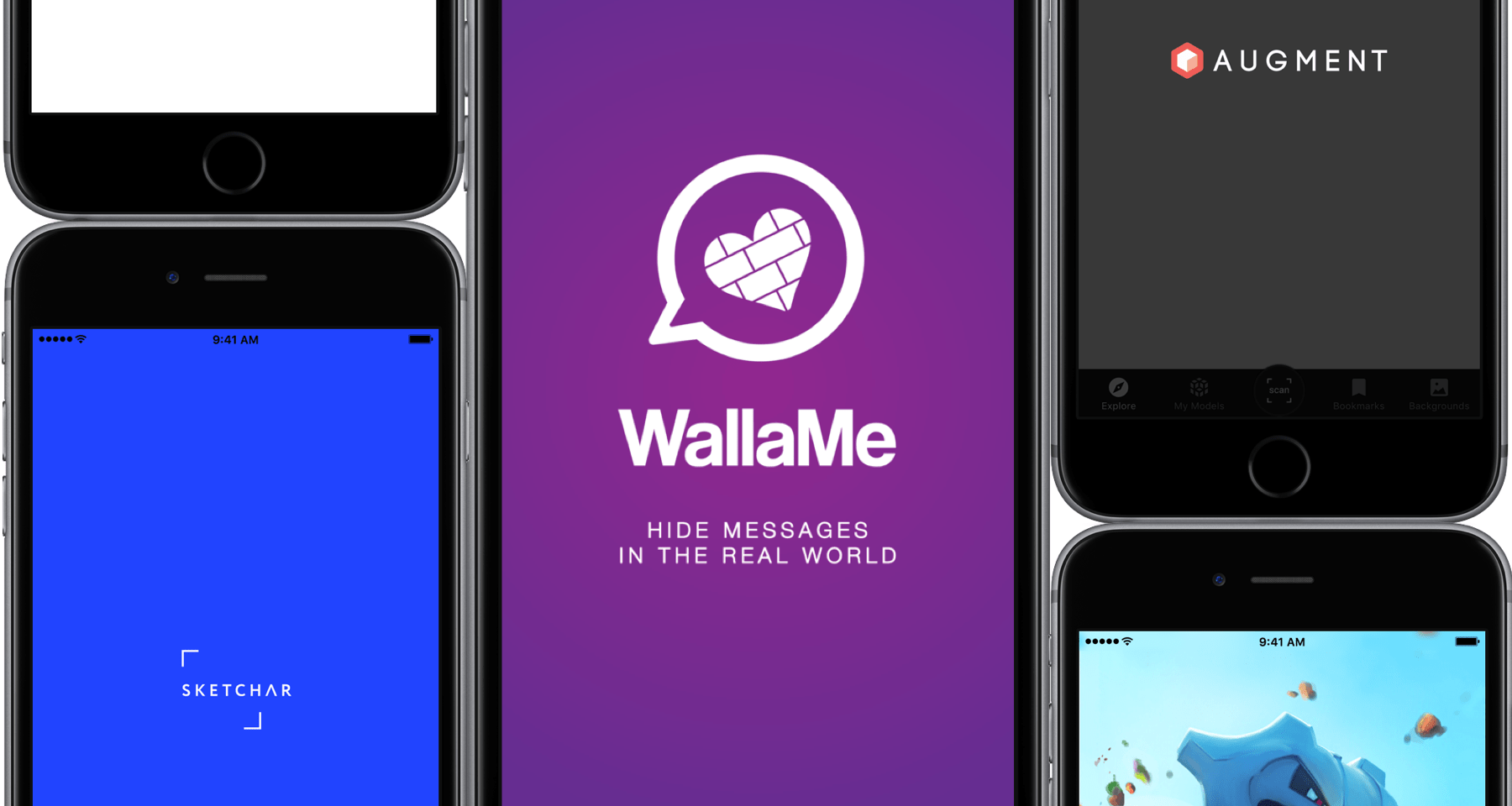 More often than not, the term Augmented Reality still has that elusive, techy ring to it, particularly when brought up in conjunction with Apple’s purported eyewear project. Curiously, many of us have it down as tomorrow’s technology rather than today’s, when the truth is that AR apps have populated the App Store for years.

While some of these apps are admittedly not much more than shoddy tech demos, separating the wheat from the chaff actually produces some really cool apps conceived to boost your business, creativity or simply keep you entertained in novel ways. With the preamble out of the way, here are the best Augmented Reality apps for iPhone available today.

The best Augmented Reality apps for iPhone and iPad 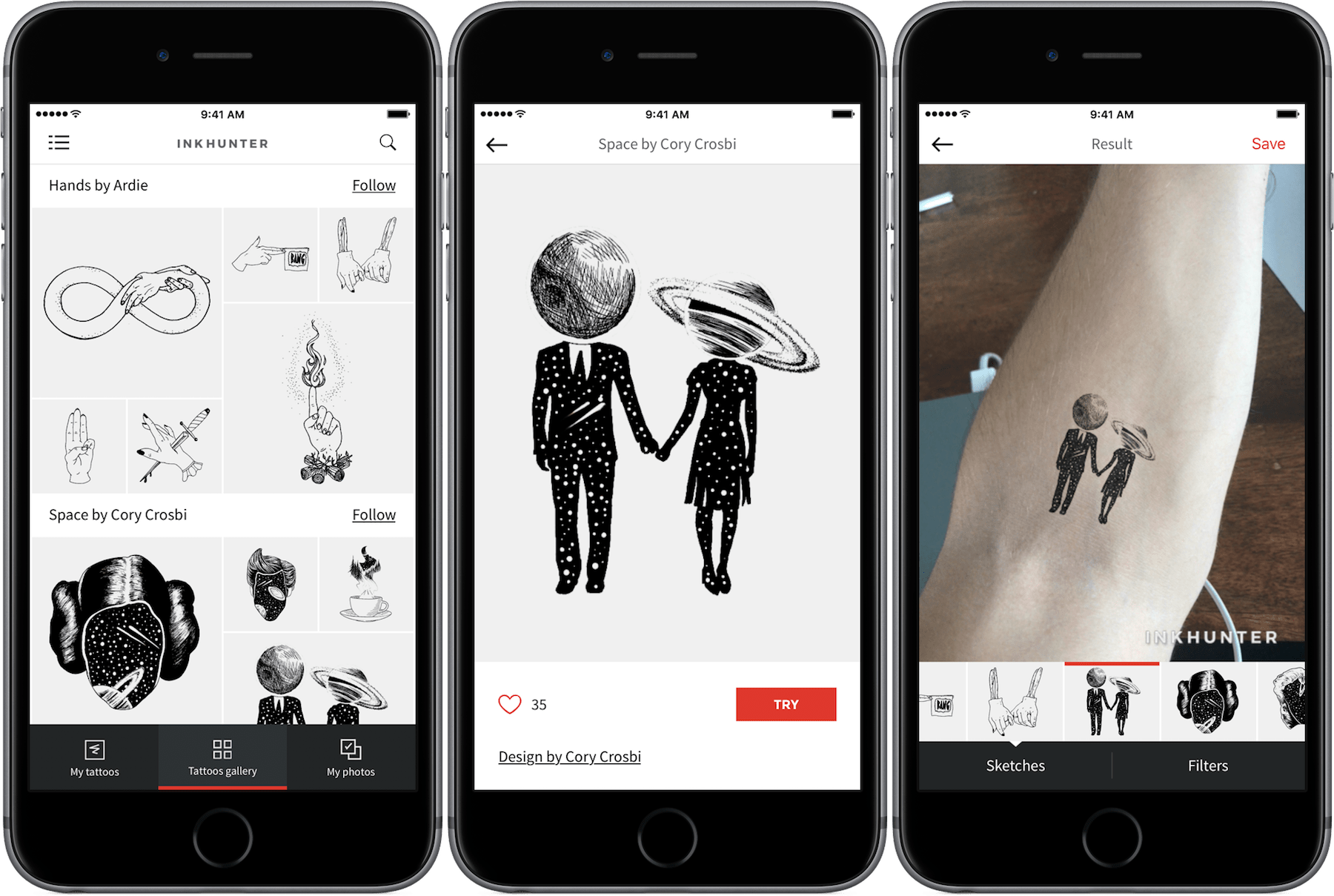 Tattoo aficionados and anyone pondering to ink their bodily canvas for the first time will want to grab hold of InkHunter. Install and launch the app, draw three lines (much less irreversible than a tattoo) on the spot of your body you want to probe for a permanent tattoo, and test away! InkHunter offers a considerably large catalogue of all kinds of tattoos you can now project onto your skin, then adjust in size, apply filters and ultimately save to your personal gallery. And best of all, it’s totally risk and commitment free.

In addition, you can create and try your own written tats or follow artists for ongoing inspiration down the road. The app looks and feels professional and, even better, won’t cost you a dime. So no matter if you’re already hooked to the needle or just curious about tats, you should probably have a play around with this one. 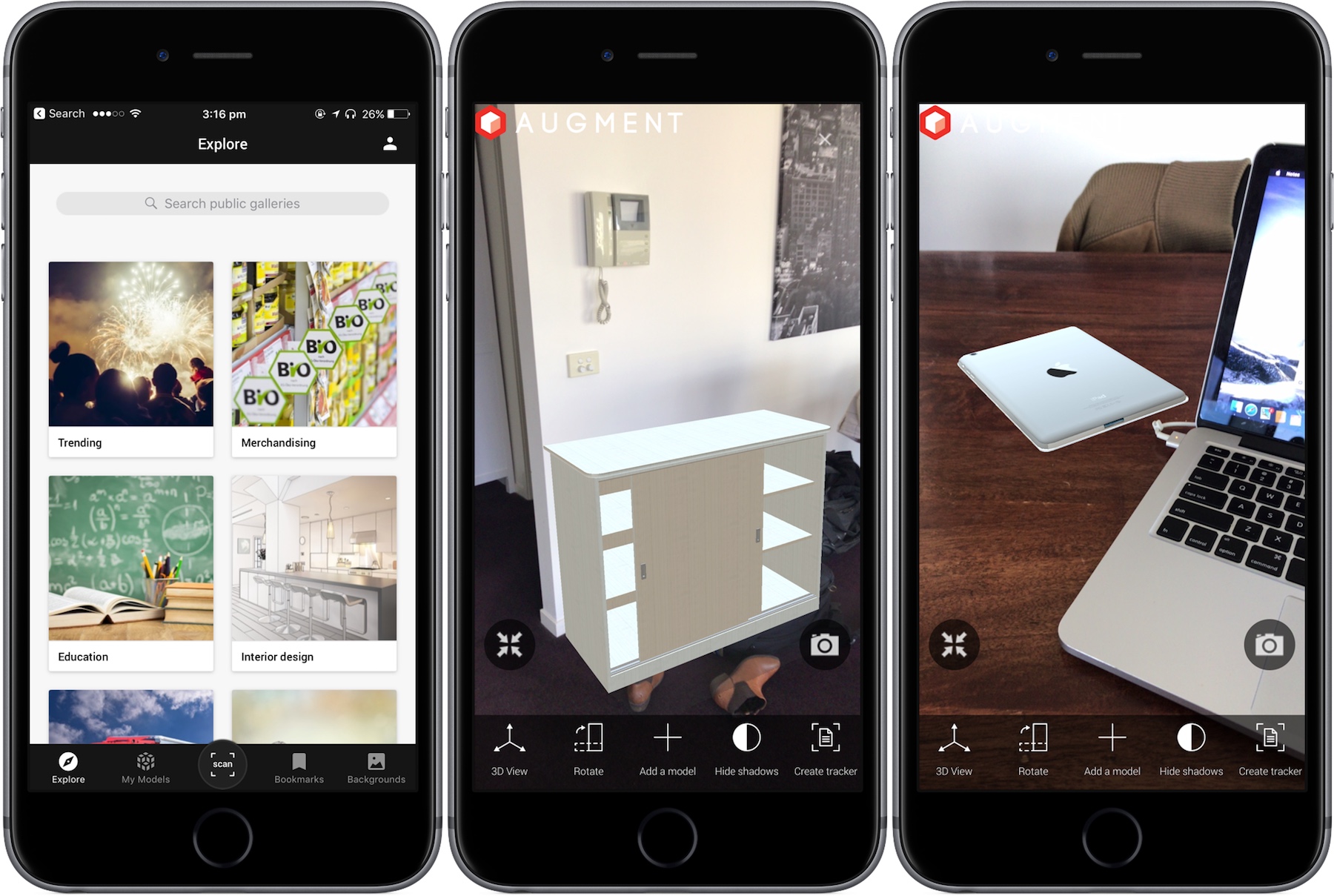 Broadly speaking, Augment can perform two kinds of magic: for one, it renders three dimensional objects to visualize them amongst real life objects and, secondly, you can produce renderings on the basis of QR or AR codes. If the first one sounds slightly more awesome to you than the scanner option, that is because you have good intuition. What’s it good for, you ask? Think rearranging furniture at home or overhauling your business space.

Simply pop open the camera and look around, then move and scale the rendered object into position (where it will stay put regardless of motion) and little will be left to your imagination next time you’re wondering if a white wardrobe would look good on dark carpet. This is obviously just one hands-on example you can perhaps relate to, but with hundreds of objects available your creativity should know no bounds on Augment. 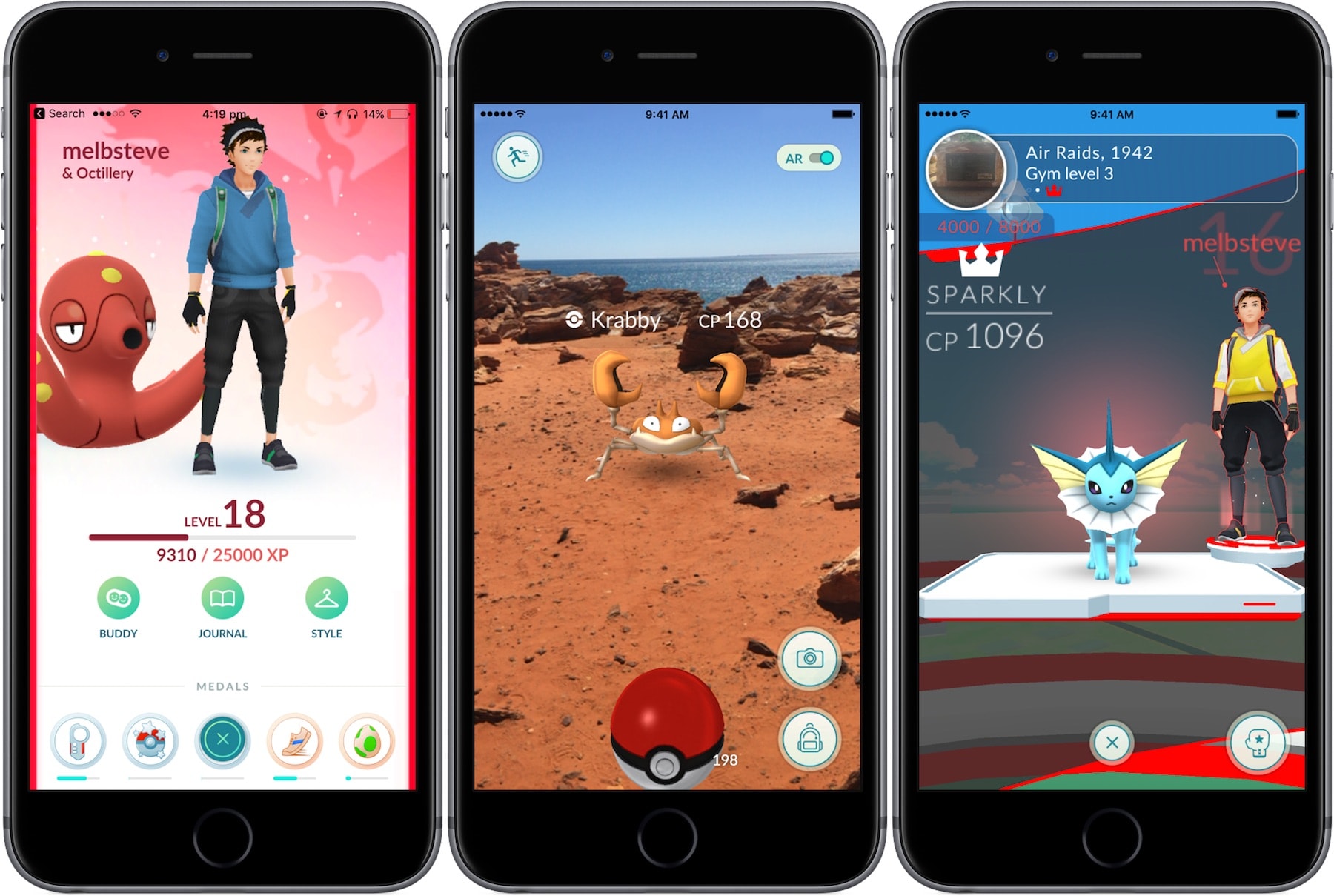 Admit it, Pokemon Go was the first association coming to mind when you saw the cue words Augmented Reality and iPhone in the title. It has been next to impossible to escape Pokemon Go news and we are still only slowly recovering from a spell where the record-breaking cult game had become virtually synonymous with Augmented Reality on the internet. On the off chance none of this talk means anything to you, perhaps it is time to check out the app predicated on the now decades old franchise.

The game masterfully ties together Geolocation and Augmented Reality technology, requiring real life mileage of the player in order to hunt down Pokemon and subsequently capture them per your iPhone’s camera. Needless to say there is a lot more going on with respect to the game, but you’ll either know anyways (and have already zoned out just reading this paragraph) or if it does not ring a bell whatsoever, we won’t have the time to fully induct you to the topic. In that case, have a browse through all of our articles on Pokemon Go.

Either way, not only on account of its accolades, Pokemon Go deserves a spot in the award ceremony. You can download the game across most of your devices – including a companion app for Apple Watch – at no upfront charge. 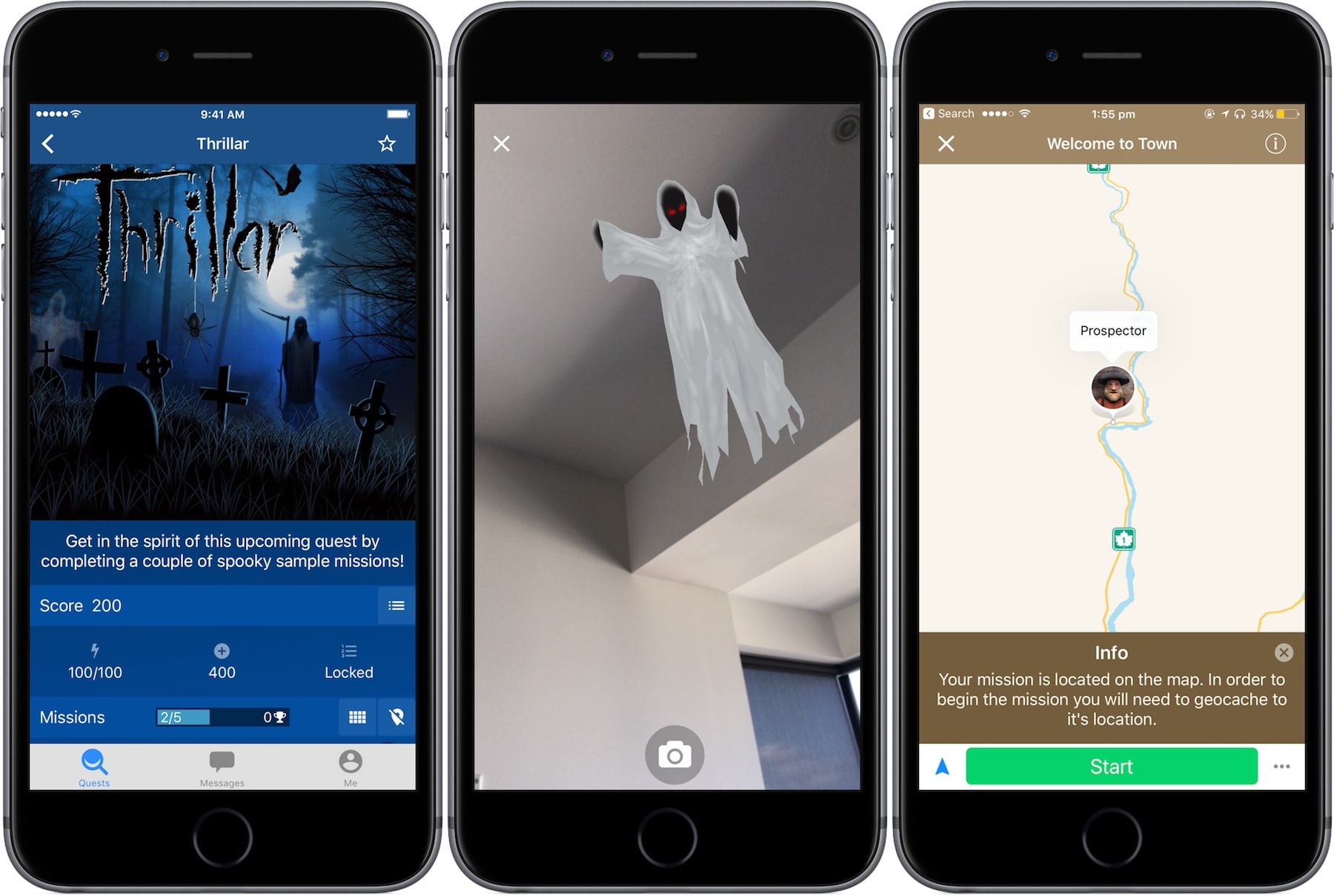 QuestUpon offers a compelling, quest-based game experience that (just like Pokemon) will spur you on to – for example – physically travel to specific sites or brandish your iPhone’s camera at the park in order to find a hidden treasure chest. Unlike Pokemon, QuestUpon boasts rather linear missions which have to be completed in straight succession to finish a quest. The game features thoughtfully crafted, even educational old-world quests, which by implication can look and play a little geeky (and I use that word in the most endearing way).

Accordingly, some of these quests might include geocaching exercises that actually propose you travel to Yale to play the ‘Historic Yale’ quest and so on. QuestUpon also heavily relies on a social component, which is integrated into various quests and occasionally utilized to trigger waypoints or achieve certain missions. If you and your friends feel up for a real life quest sprinkled with Augmented Reality fun, QuestUpon could serve you well. 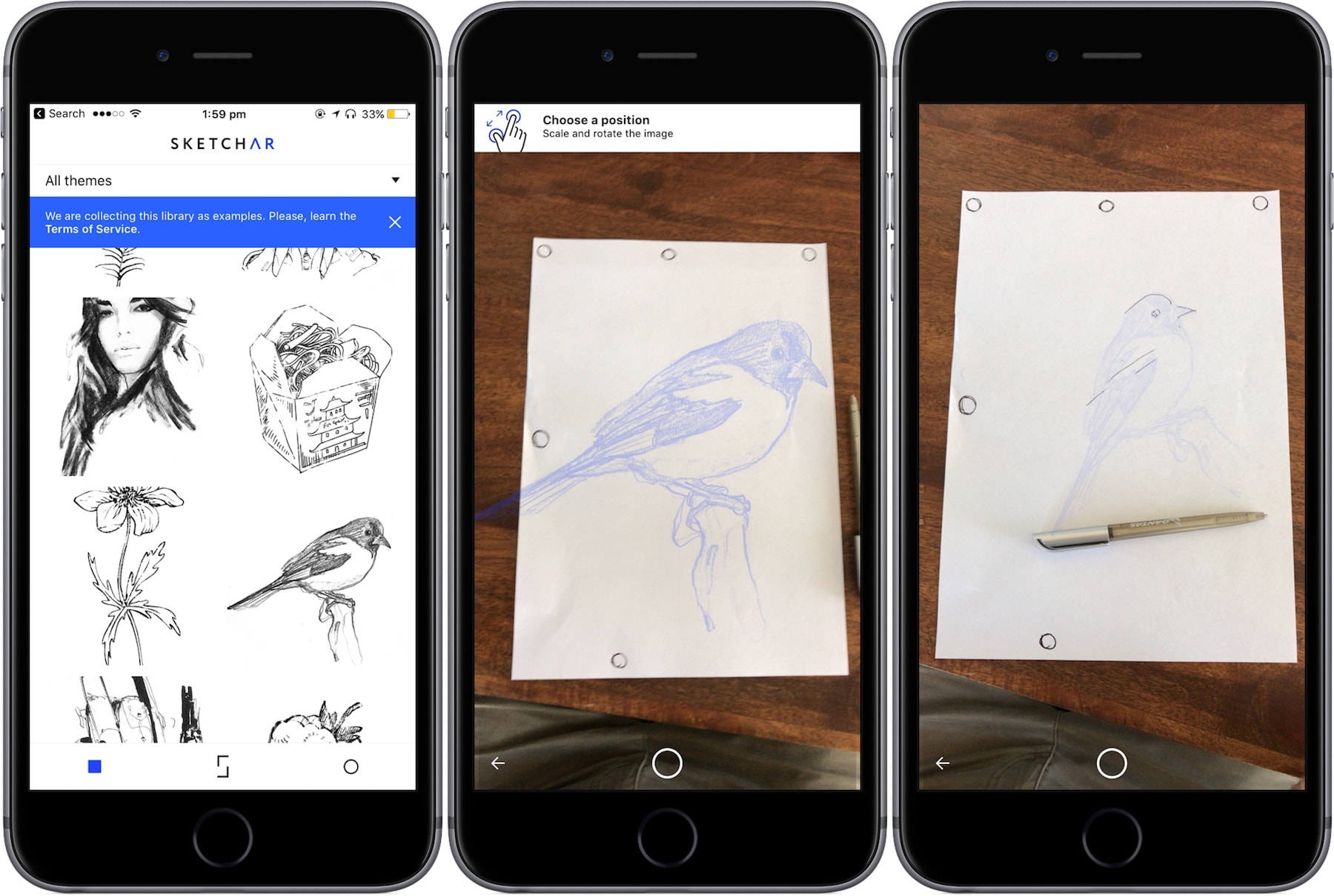 Here’s one for the artists amongst us: SketchAR promises to project a sketch of your choosing right onto a piece of paper, in order that you can draw the subject and create some beautiful artwork yourself. When I first bumped into the app I was intrigued by the concept and equally skeptical of its feasibility all the same. Luckily, it does deliver the goods. For it to work reliably, clip your iPhone to a tripod, get your piece of paper ready and draw 5 circles on it like prescribed by the app. SketchAR is going to use those circles for its orientation and once detected throw the selected motive onto your canvas.

What’s more is that as soon as the picture magically presents itself, you can scale and rotate the image until you have found the sweet spot on your paper. Once you dig in and start channeling your inner Picasso, not much can throw off SketchAR. That’s so much so that your hand on the paper can get in the way of the projection without causing distortions, or you could even accidentally remove the paper for a while. As long as it is jiggled back into position eventually, the sketch will reappear.

Love to create but feel a little uninspired at times? SketchAR comes for free, so why not give it whirl! 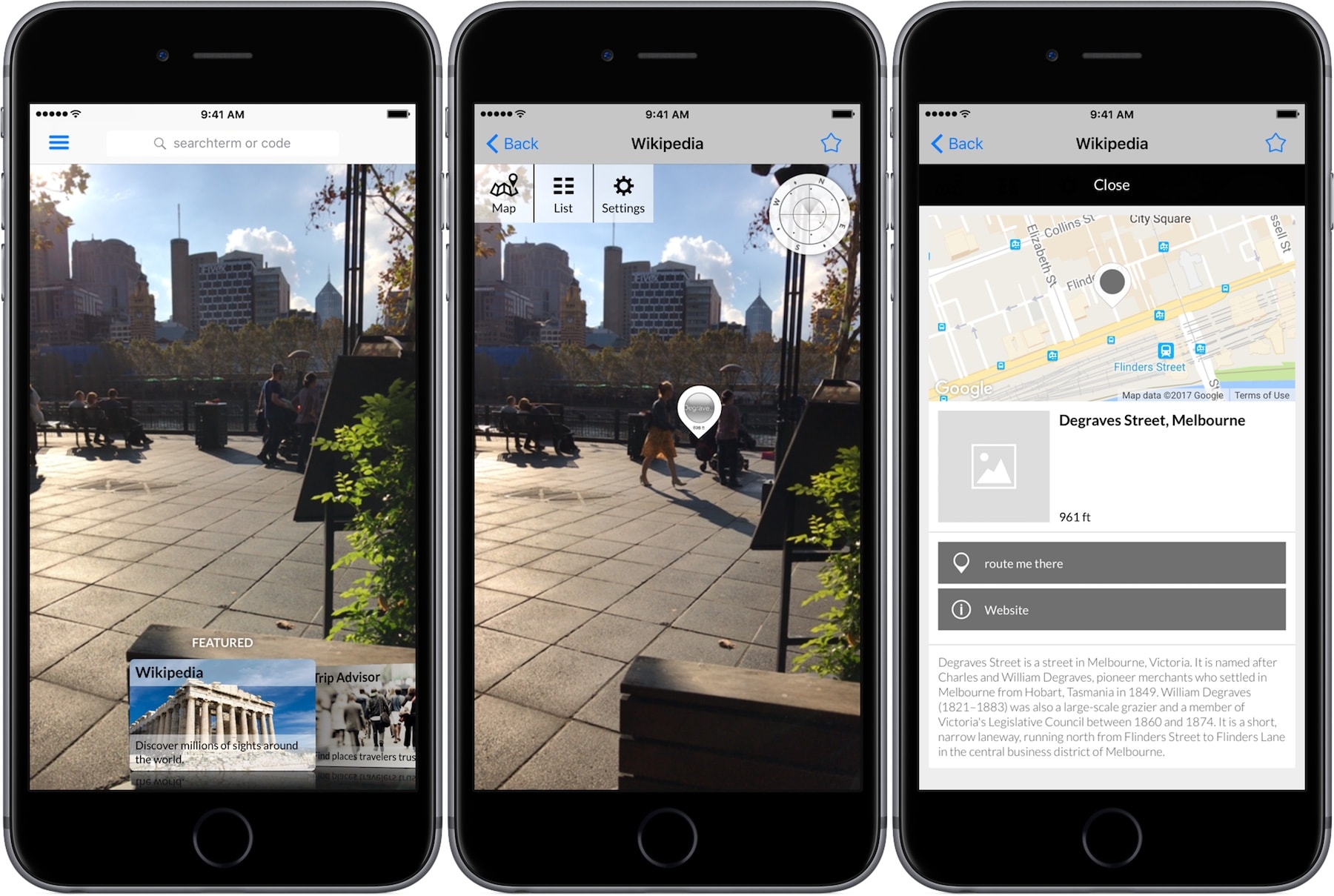 Wikitude isn’t the first and will not be the last app to overlay your camera view with compass like information and moving markers for sights or restaurants. It’s one of the more potent and less cluttered ones though, and has hence earned the feature. Wikitude lends itself as a neat city guide that you can use to identify any city’s hotspots, which itself are broken down into two categories: Wikipedia entries (sights) and TripAdvisor spots (includes bars, restaurants). That is, you pick the category and start pivoting the camera around to find markers representative of actual establishments show up on your screen.

Basically, if you have an aversion to reading maps, this is your kind of map. Next to the fact that Wikitude does not spam your camera screen with information overload (detailing every single shop available), the other commendable trait is the ‘route me there’ option, which can quickly summon Apple Maps to guide you to any place found in AR vision.

As all the apps curated on our list, Wikitude comes for free and is available on any device running iOS 8.0 or later. 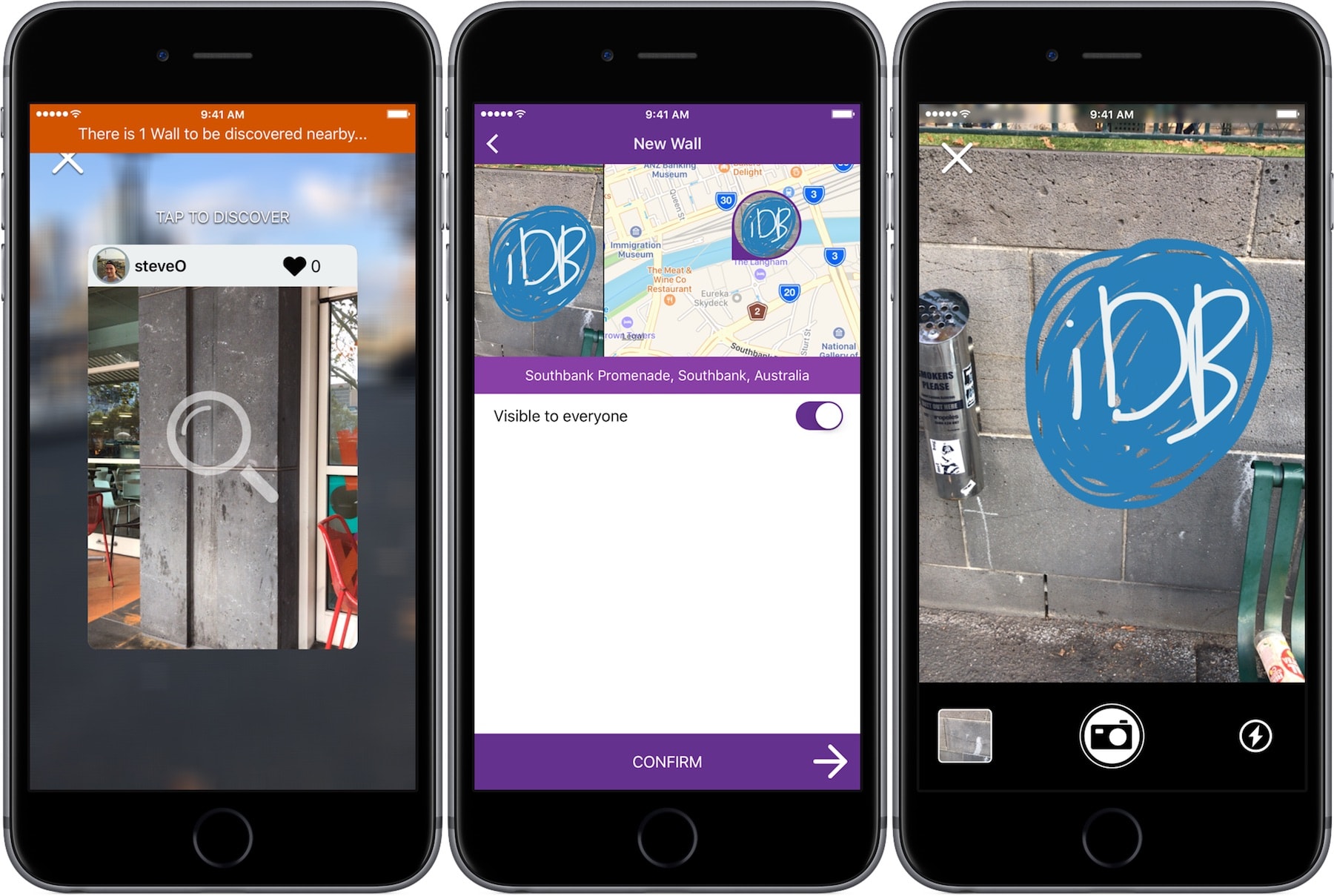 WallaMe‘s tagline is ‘hide messages in the real world!’, which indeed encapsulates the point of the scavenger hunt like game best. There is something to be said for the appeal of hiding graffiti like sprays on any outdoors wall, knowing well that other players of the game might venture to the spot to unearth it in the future. WallaMe consists of a social wall best compared to your Instagram feed on the one hand, but more importantly the ‘spray and spot’ game on the other.

Put simply, whenever you’re in town or visiting a new place, WallaMe’s spotting tab will indicate the location of virtual graffitis around you. Walk up to one, find the wall (the app will display a blank photo of it) and point your camera at it to match the photo – the piece of art (or unrecognizable scribbling) will reveal itself. Of course what’s arguably more fun is to tag places yourself and leave whatever comes to mind in some rather unique locations.

WallaMe is a laugh, especially if you need an excuse to venture out into town or feel a little mischievous. And – you guessed it – it’s available free of charge.

Google is on any account one of the companies constantly pushing the envelope, which definitely shows in their snazzy language translation app. Most likely with tourists in mind, Google introduced an AR camera translation feature (how’s that for a mouthful) back in 2015, which I would recommend for any traveller to have a crack at eventually. Let’s say your mandarin is a little dusty and you’re stuck in Beijing wondering what the train schedule says: point your camera at the sign and let Google do the heavy lifting in real time. While not flawless, it’s certainly impressive whenever it comes off!

Dino Defense is very much rough around the edges and an outsider in many ways (it also hasn’t been updated in a while, but appears to have 64-bit support). Somehow however, it has charmed its way at least into the Honorable Mentions list. With Dino Defense, you will end up turning full circle and frantically pointing your iPhone at hoards of Dinosaurs attacking. Ward them off with a range of green water pistols (to talk in accordance with Apple’s emoji policy) and see how long you will last!

Finally, Niantic’s Ingress is not only the company’s most defining brainchild but also the precursor to the Pokémon Go craze ensuing in 2016. Its premise – the existence of a mysterious energy controlled and leveraged by gates in the outside world – makes you mark your territory in real life and capture portals in the name of one of two factions. Ingress will reel you in quickly if you like the idea of a massive multiplayer online game but just can’t get yourself to identify as a part of generation Pokemon.

Find Ingress on the App Store.

As of today, solid Augmented Reality apps are still few and far between. If you believe there has been a glaring oversight though, let us know in the comments and I’ll gladly give it a go myself – nothing is set in stone with this roundup!