In the absence of reliable figures from Apple, it is not much more than conjecture to say that AirDrop is likely a feature often neglected by the average iOS user. The gut feeling persists though, simply based on day to day observations, and it is a tenable position to take until proven wrong by Cupertino or another reputable source. The file transfer protocol is indeed handy for the transfer of heavier media files (e.g. videos, photo albums), but often only becomes relevant to us when we for example have upgraded to a new device.

Next to sheer transmission speed however, there are other notable areas where AirDrop has the clear edge when it comes to sharing all kinds of material from your iPhone. The AirDrop icon has now fully permeated the sharing tab in iOS 10’s user interface and that is for a good reason: it is without fail going to be more nimble than iMessage, Mail or other contenders, often actually skipping steps that would throttle the process elsewhere. Such being the case, here are some unique scenarios where AirDrop excels on your iPhone and why you should try to embrace the feature more regularly. 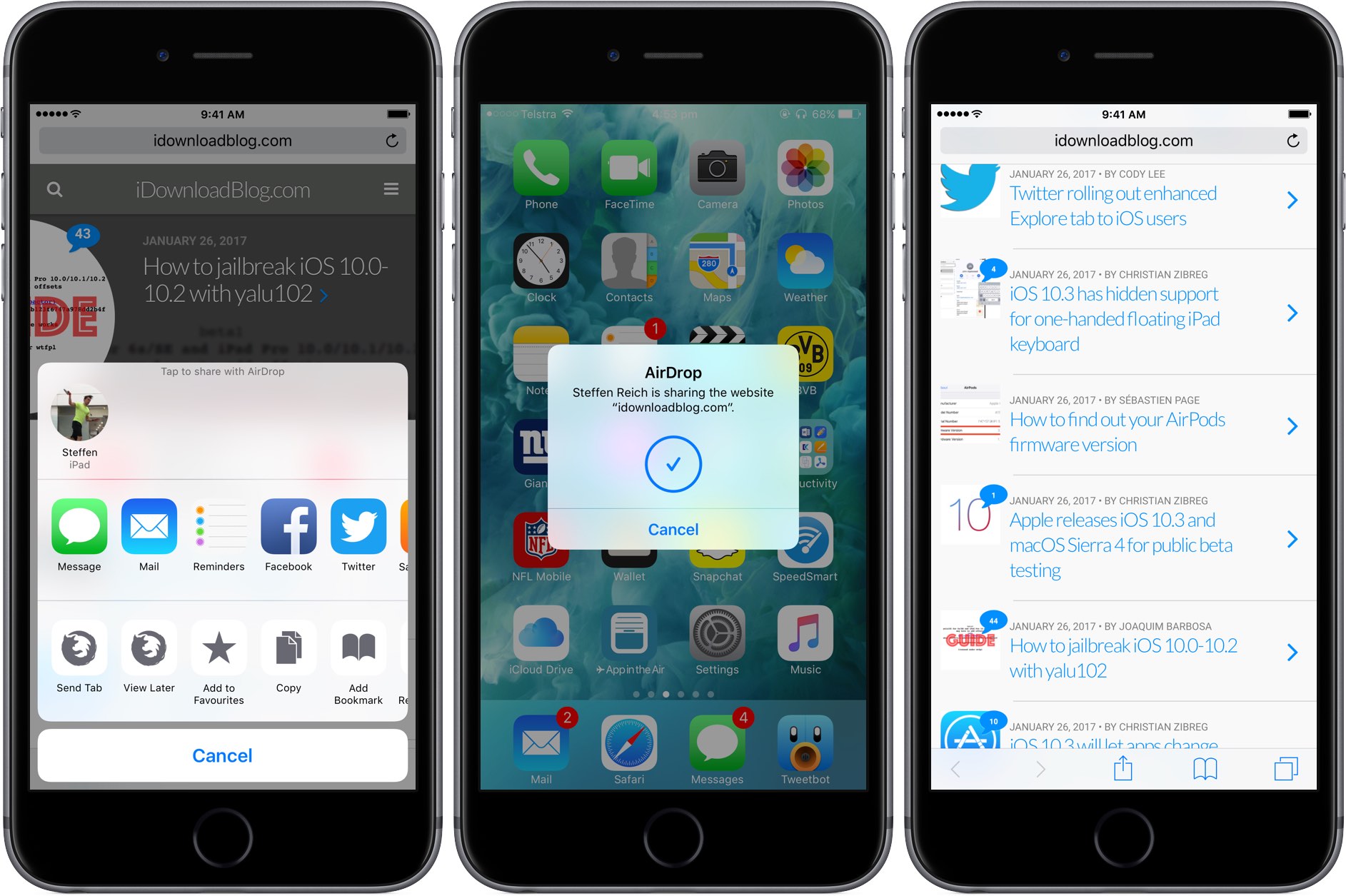 When added to the UI a few years back, many users must have wondered who on earth would want to AirDrop a Safari website. If not in practice, at least in theory the answer should be: everyone. A tap on the share icon in the bottom bar of Safari, followed by a touch on your friend’s circular icon is literally all it takes for the receiver’s iPhone to automatically pop open the page in question. By way of contrast, sharing a link through iMessage or any other app means sending out a link first, which for the recipient most often means switching to such app, hitting the link, then being redirected to Safari. What sounds like no big deal is nevertheless a perceivable difference when you try it – AirDropping links is super speedy and swiftly eliminates a step between sending and opening. 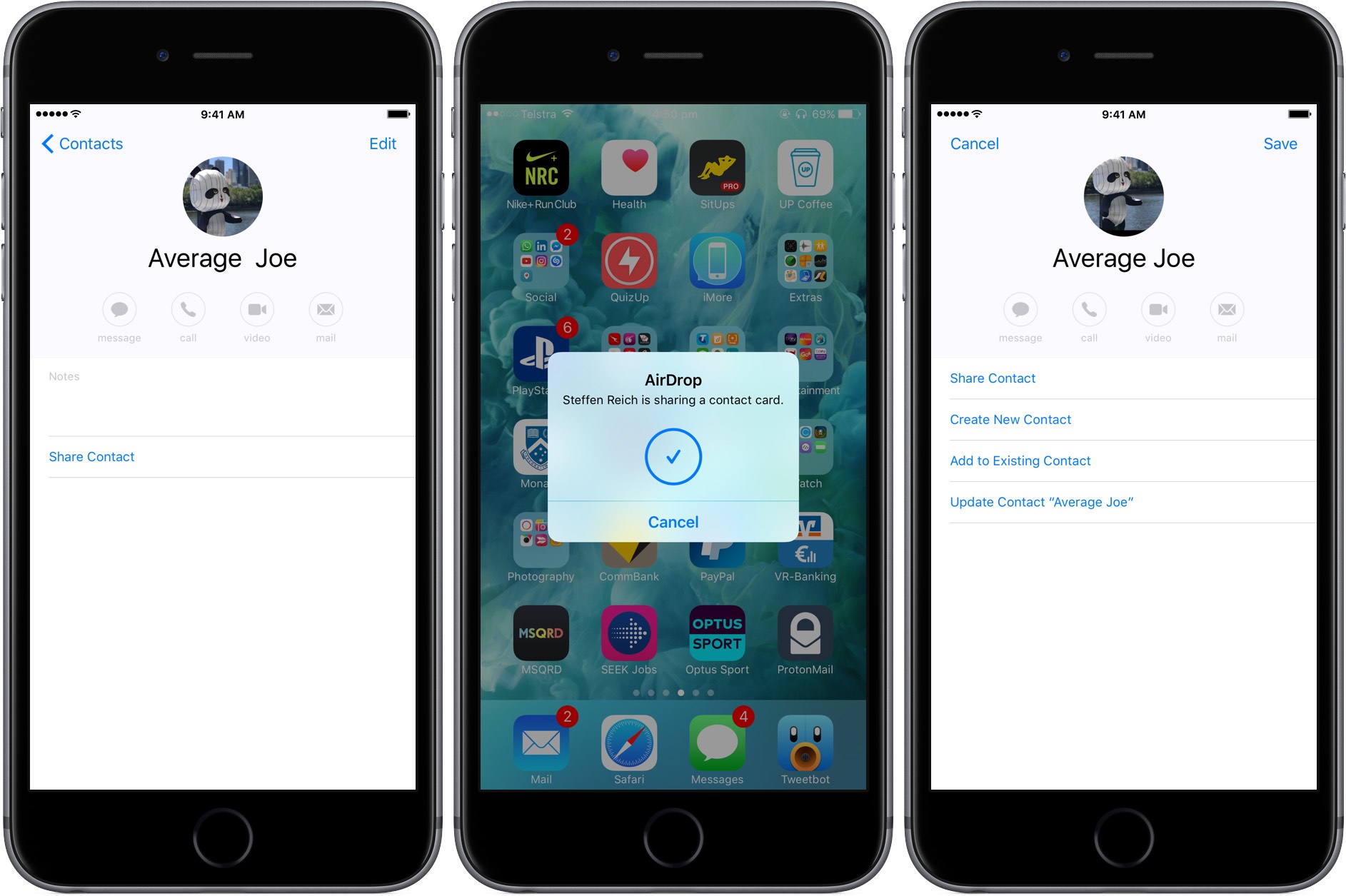 Similar to the Safari case, sharing Contacts is fairly straightforward and has probably been executed a couple of thousand times worldwide since you started reading this sentence. Alas, it is just as certain that only a small fraction of these contact cards have been transferred by means of AirDrop.

Why is that unfortunate you ask? Because the AirDrop mechanism once more is superior: sending it via iMessage and the like implicates opening iMessage and touching the card, which will subsequently pull up the contact and ask you to Create New Contact or Add to Existing Contact. After choosing, you are prompted to edit and save the card. Contrary to that, accept the Contact card via AirDrop and you will have the simple option to Save the card in the top right corner. Done. 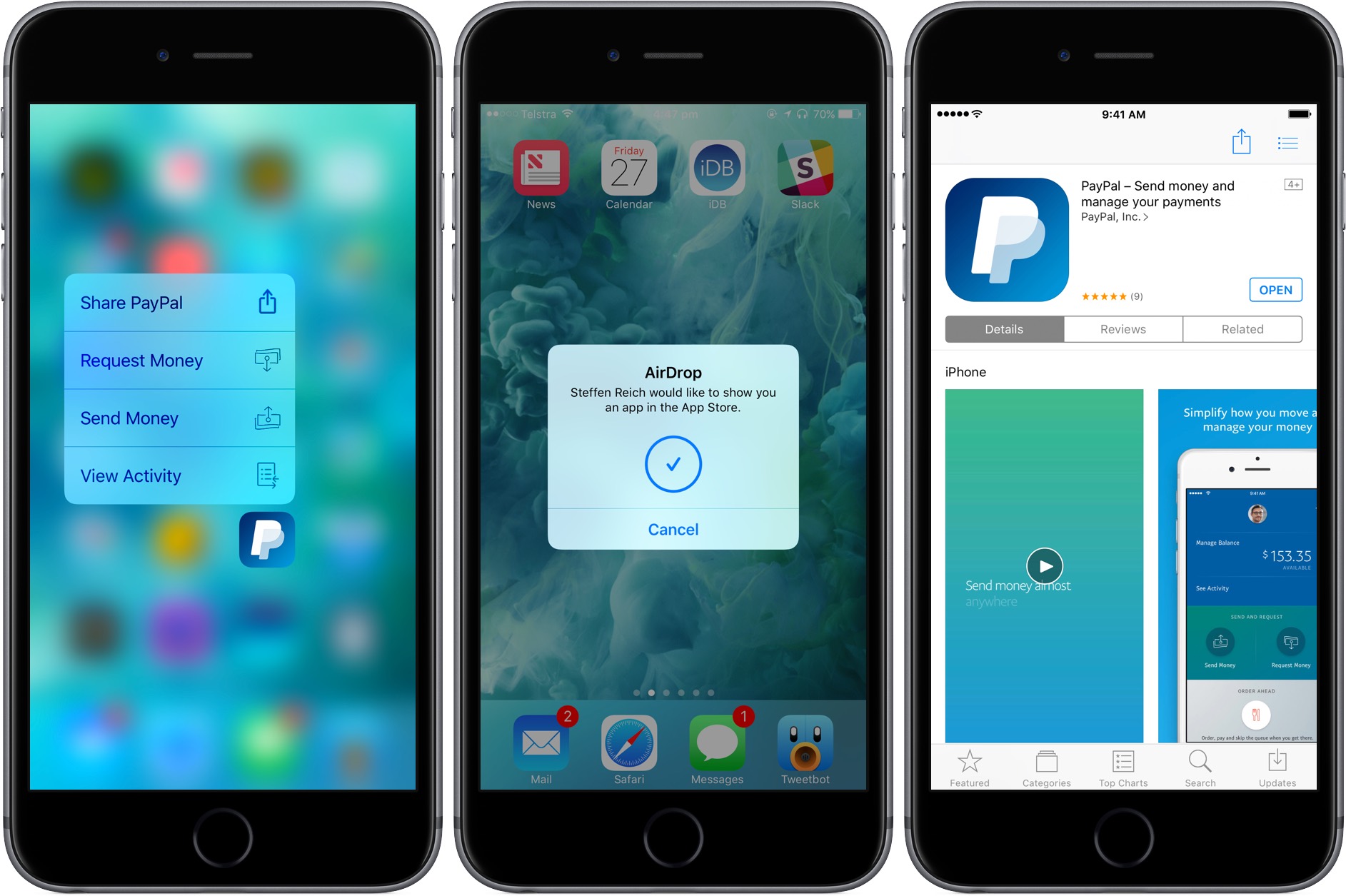 Just like with links in Safari, sharing an app (either via the App Store, or 3D Touch on iPhone) through AirDrop cuts out the intermediate step of having to physically open the link on the receiving device. Hit share, tap the recipient’s bubble and watch his or her iPhone jump from the home screen straight to the recommended app. It’s as effortless as it gets and straight up cool. 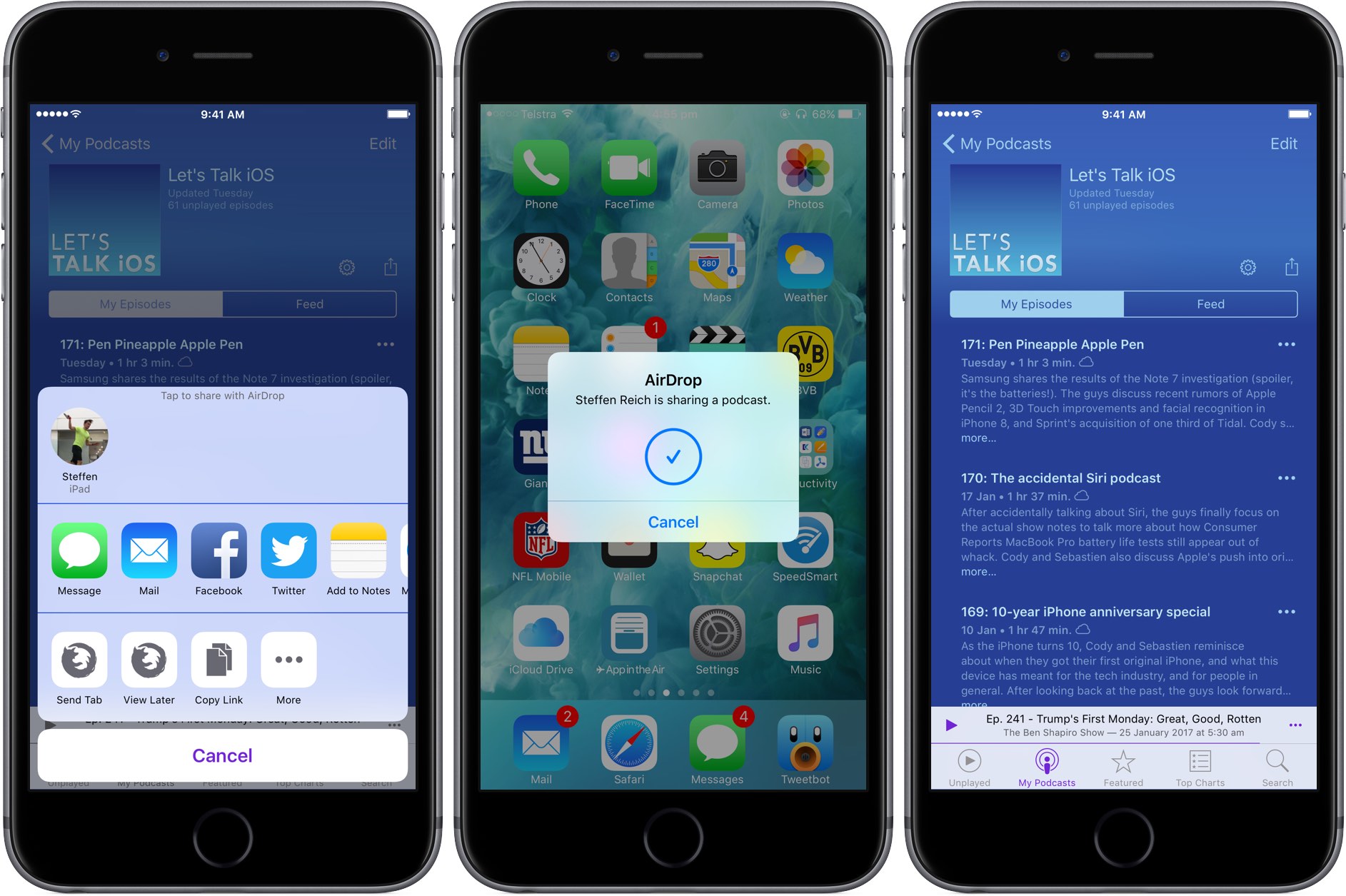 This section should probably be titled Did you know that you can share a Podcast? instead. Anyways, you can. And if you ever feel the need to, try to use AirDrop if circumstances permit. In line with the previous examples, sharing by means of AirDrop eliminates the middle man and circumnavigates any other app that would merely dispatch a link. If you want to make sure the Podcast of your choosing is for sure looked at by the recipient, AirDrop will take care of it. If accepted on the receiving end, the phone will directly launch the Podcast’s page. 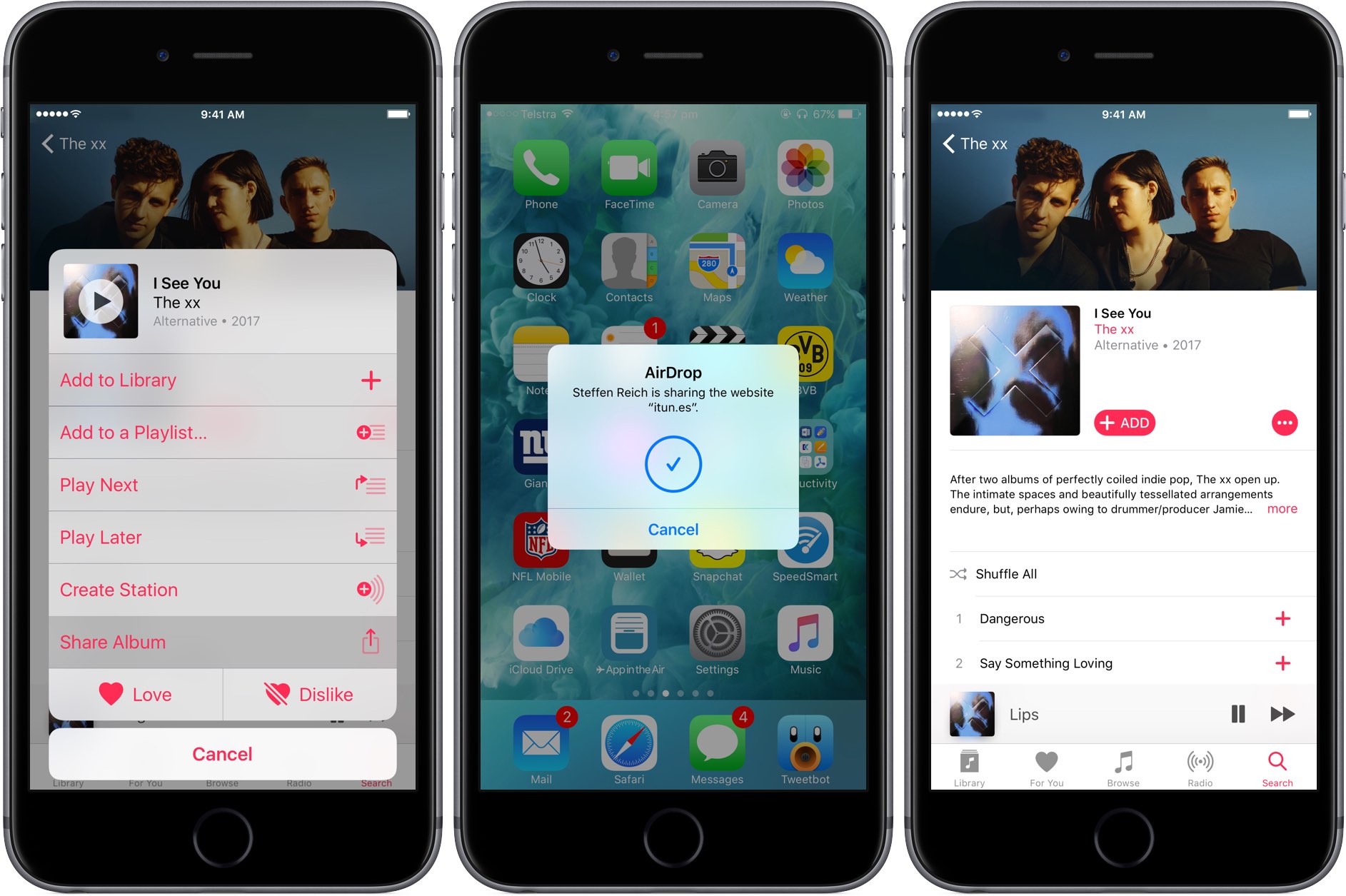 While only pertinent to Apple Music users, this is again the most direct, cheeky and almost intrusive way to impose your musical whims on your friend’s device. A shared album is going to make the recipient’s phone jolt straight to the album. Even better, share a song via AirDrop and if accepted it will immediately start playing the track. If you and a buddy hang out, you can now be the DJ of his or her iPhone… right from your own device. Needless to say how this beats out sharing via iMessage!

There is bound to be more places where AirDrop outpaces other forms of sharing, simply because it has become so deeply embedded in iOS. With that in mind, if you have any other AirDrop shortcuts up your sleeve, sound off in the comments!