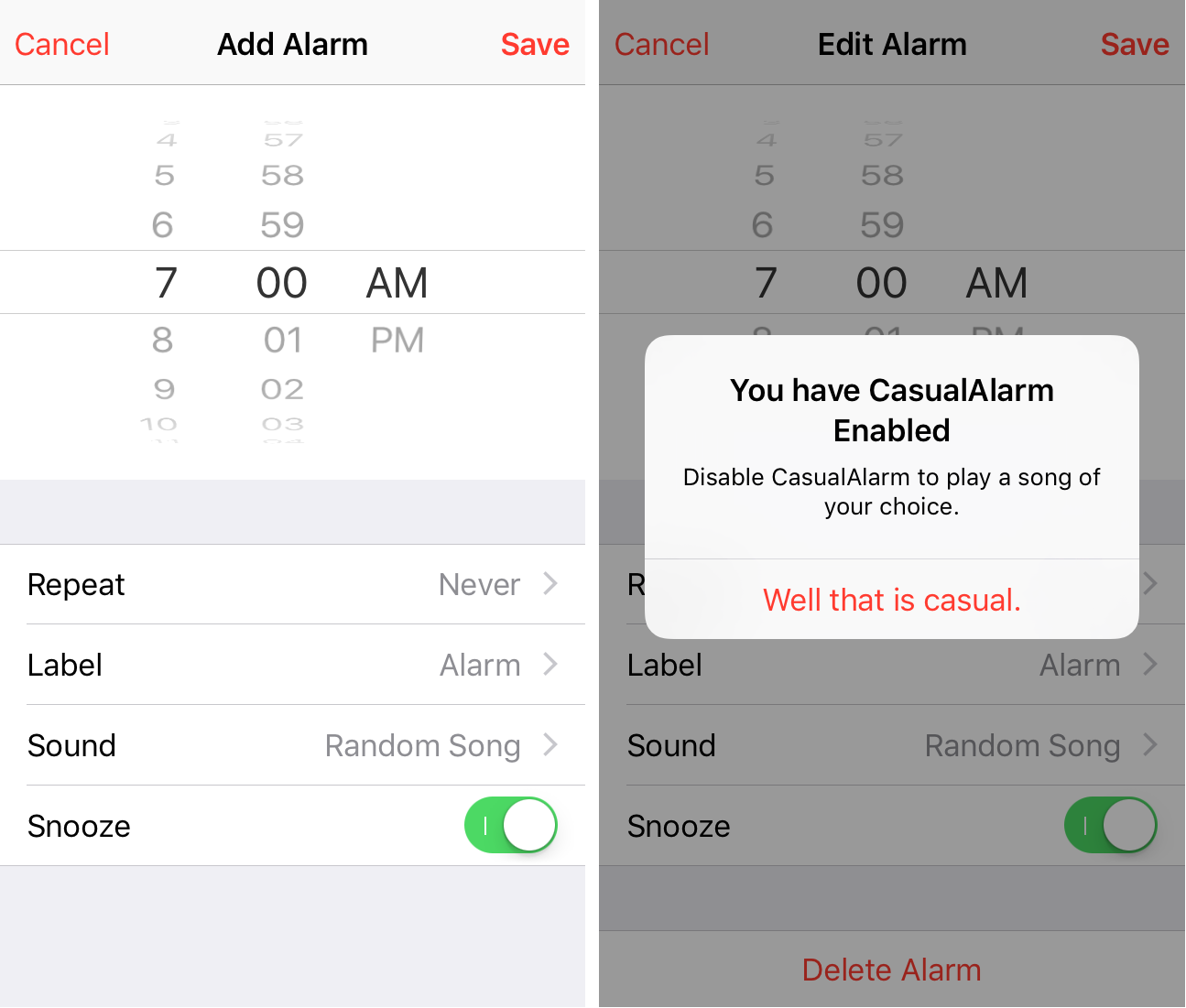 Tons of people use their iPhone as a means of waking up every morning thanks to the built-in alarm feature, and while there are a number of alarm tones to pick from and despite being able to choose any local song on your device as an alarm sound, there is very little diversity whenever you choose either of these methods.

If you’re already using your music library to wake up in the morning via the stock means in iOS, then you’re going to hear the same track each and every day, unless of course you’ve set a completely different alarm for each day of the week with a different song or you edit your alarm sound on a daily basis, both of which sound kind of cumbersome to me.

Even if you do the former, which offers a little bit of flexibility within stock iOS, then you’re still going to have repetitive songs each and every week, which still isn’t quite the best solution for someone who likes to keep things mixed up.

With CasualAlarm, your Clock app will tap into the power of a random number generator to determine what song from your local music library will be played as an alarm, rather than requiring you to manually configure a song or configure 7 separate alarms throughout the week.

Not only does this save you a lot of time in terms of configuration, but it ensures you get a virtually random alarm song every day of the week, every day of the month, throughout the life of your jailbroken device.

Because the songs are chosen at random, there’s always going to be a chance that a song could repeat itself from time to time, but there’s no telling when. The two biggest factors when determining if this will happen are: 1) the number of songs you have saved locally; and 2) how long you use the tweak for.

The longer you use the tweak with a limited pool of songs, the more likely a song is to play again at a future date. On the other hand, if you have a very populated list of songs for the random number generator to pick from, then you’re less likely to hear repeats simply because there’s more to pick from.

CasualAlarm adds a preferences pane to the Settings app where you can enable or disable the tweak on demand: 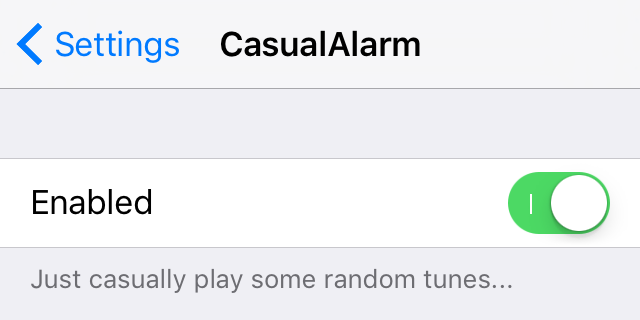 After you install the tweak, you will need to disable and re-enable the tweak for it to take effect. No respring is necessary after you change the settings here.

After you’re done configuring the tweak, you can go to the stock Clock app and set up a new alarm for any time you want. You will notice that the tweak automatically sets “Random Song” up for the sound of the alarm: 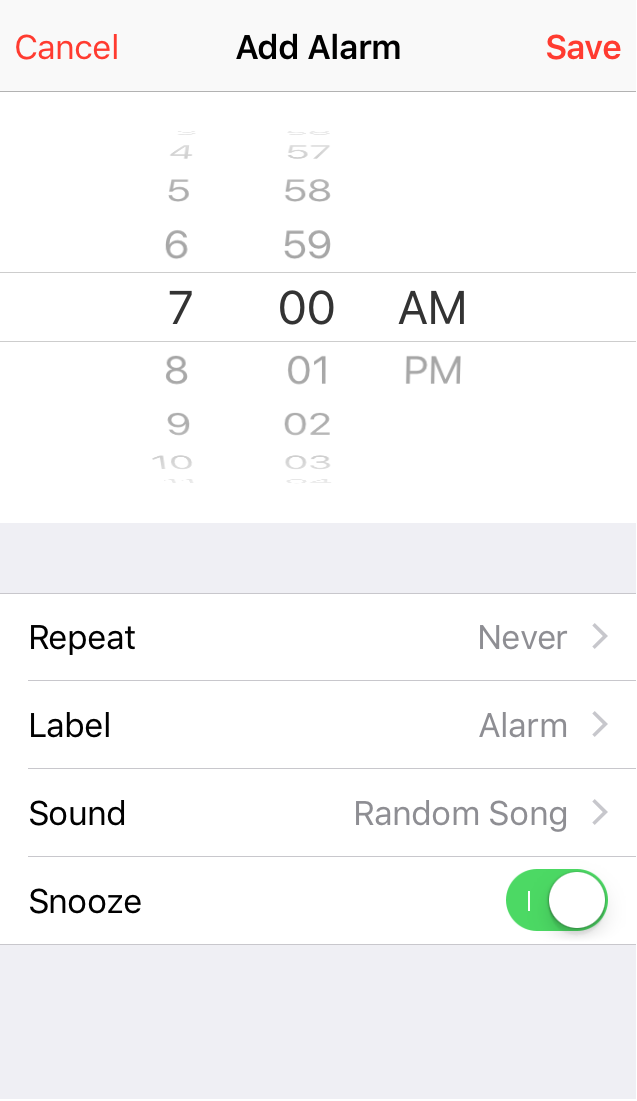 Another thing that’s worth noting is that as long as CasualAlarm is enabled, you will be unable to select any other sound on your device for an alarm sound. If you try, you will get the following alert pop-up: 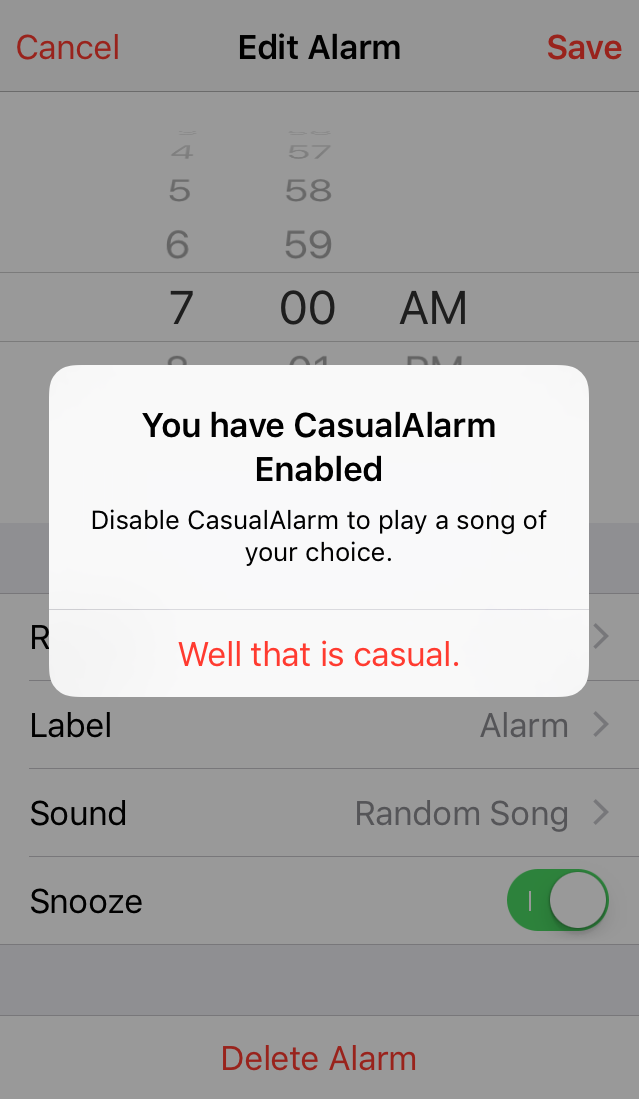 That small downside aside, CasualAlarm is great because it helps provide you with a different alarm experience every morning, and honestly, it doesn’t require any additional configuration. All you have to do is set up a new alarm for whenever you want to get up every morning and the tweak takes care of the rest for you.

If you’re interested in trying CasualAlarm, you can download it for free from Cydia’s BigBoss repository right now. It works on iOS 9 devices.

Also read: Use your music playlists as alarm clock sounds instead

What are your thoughts on CasualAlarm; would you use it? Share in the comments below.